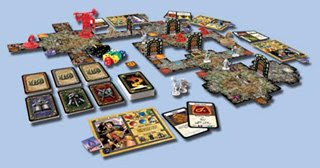 I have a longstanding rule - I do not review games that I have never owned. I am quite firm on that. When I write reviews, I generally have the game sitting next to me, often flipping through the rulebook for clarification, or counting pieces, or otherwise fact-checking myself for accuracy.

But Descent is different. For one thing, I don't own a copy of Descent. I've played it several times, and understand the rules very well, and have even downloaded a copy of the rules from the Fantasy Flight Games website. And the reason I can comfortably write a review of a game I've never owned is that wanting to play Descent is like wanting to go out on the lake in a boat. You don't actually need a boat; you need a friend who has a boat.

Descent is a huge game. Not just in raw bulk, though it is a little tough to store in a crowded trunk. Descent is also huge because it comes with an incredible amount of stuff. There are no less than 80 plastic miniatures in the box, and they're easily the best plastic miniatures in any dungeon game made before or after. They're simply gorgeous. Then there are 61 map pieces, 10 door markers, 180 cards (in 10 different decks), effect tokens, threat tokens, treasure markers, and a whole hell of a lot more. You'll spend an hour just punching out the cardboard pieces.

Once you're ready to play, everyone is dealt a hero. The game scales (to a certain degree), so you can still go into a dungeon with just two heroes, in case you're a little short on players. Then you get special abilities by drawing cards and assigning them as you see fit - your adventurer may be able to shoot better, or control a familiar, or raise vanquished foes to fight for him.

Adventurers are described by several statistics, which are all listed on their character cards. Speed describes how many spaces you can move, maximum wounds describes your character's sturdiness, and armor absorbs damage. Combat traits are expressed in black dice - a powerful warrior might have three black dice in melee, a ranger might have them in ranged combat, and a wizard might have them in magic. Some adventurers spread these around a little, which means they suck at everything.

Once you've built your party, the overlord (the dungeon master, but this isn't Wizards, so they had to call it something else) will show you the first area by building it with the map tiles. These are damned pretty, too, so your dungeons are really cool right out of the gate. Then you've got doors, and treasure chests, and piles of rubble, all of which help make the dungeons really come to life. Then the overlord will put out some monsters, and you'll jump immediately into rumble mode.

Sadly, rumble mode can take a while. On a player's turn, he can take two actions - and there are lots of options. Unlike other dungeon crawl games, players can do much more than move and attack. You can put yourself on guard (overwatch, for those of you who dig an old-school game reference), take a turn to rest and recover fatigue, expend fatigue for a special ability, aim a weapon to be fired next turn, or several other things. It can take a little while to work all that out, especially when there are four heroes and possibly a half dozen monsters, all of which need to take these rather complicated turns.

Combat is great, though. One of the coolest things about Descent is the way attacks are resolved. It seems that every decent dungeon crawl game has to have groovy dice, and Descent is no exception. Descent dice come in several different colors, each with differing numbers of hearts, lightning bolts and numerals (numbers to you and me, but I already said numbers once, and was trying not to repeat myself). The numbers add up to your range - roll too low, and you miss. The hearts add up to your damage - you need more of these than your target's armor. And the lightning bolts are called surges, which can be used by some weapons or characters to add a little more range or pain. You roll your dice, count up your range and your hits, and then either laugh triumphantly at the overlord's busted-ass minion or groan as your shot goes wide.

Another important aspect of Descent is line of sight. Sure, you've got to be able to see your foes to shoot them, but that's not what I mean. In Descent, any corner you can't see might hold a monster, even if you just came from that corner. If the overlord has accumulated enough threat tokens - and there are lots of ways for him to do that - he can place a monster anywhere you can't see. So you never really clear the dungeon, and you're never really safe. Even if the only villain in the room is a weak-ass skeleton archer, there's every possibility he might be about to be reinforced by a beastman with the aura ability. And that means you will have to look something up.

So your heroes will tromp through the dungeon, always operating against the clock because at any time, the overlord might be able to spawn more monsters. Not only that, but if the overlord can run the heroes out of conquest tokens, he wins the game - and this gets easier as the game progresses, so the quicker the heroes can finish the dungeon, the better chance they have of getting out with their hides intact.

Of course, finishing quickly is not always easy. Not just in terms of a small number of turns - Descent is a marathon game. It can take a really, really long time to finish a game. The first time we finished a game, we were all feeling pretty damned good about ourselves. Even the overlord was happy - it was a first for him, too. Where some dungeon crawl games can be played in a spare 90 minutes, Descent can take four or five hours for one dungeon, especially if you meet a monster with the command ability - because that means you will have to look something up.

Unlike the other dungeon games reviewed this week, Descent places a great deal less emphasis on the story (even compared to the D&D Adventure Game, which has a painfully anemic story). Each dungeon is a separate game, often with completely different heroes. So the ongoing story is not really a big deal, because the adventures aren't necessarily all in one big story. That's not normally a problem, but it does remove some of the ongoing adventure element from the game.

But fear not! If you want an ongoing story, you can make that happen. Well, not with the base game - that's really pretty much it. But if you pick up the awesome expansion Road to Legend, you'll be able to set up campaign games. And these are way, way better. The heroes don't lose if they botch one dungeon, and the overlord doesn't lose if the heroes kill one particular villain. Instead, they both dive into dungeon after dungeon, attempting to gain experience and magic items that will let them win the game. The overlord chooses whether he intends to rule or destroy the world, and the heroes have to stop him. The whole time the heroes are advancing, the overlord is, too, and so neither side can afford to let up. It's a race against time for everyone.

One of the most important differences between Descent and its predecessors is that it is much more a contest. In HeroQuest and the D&D Adventure Game, the bad guy player is really only there to facilitate the adventure for the heroes. He is virtually guaranteed to lose. However, in Descent - whether you're playing Road to Legend or not - the overlord has a very real chance to win. The heroes will be hard-pressed to defeat the ever-growing horde of monsters before the overlord can claim a complete victory. This is not so much cooperative story-telling as it is a battle of luck and wits.

So I have now reviewed a game I never owned - a first for me. And you know what? I'm glad my friend is the one who owns it, and not me. Because he had to read all the rules, spend the hundreds of dollars for the game and all its expansions, and since he knows the game, he always has to be the overlord. See, I didn't have to own Descent to play it; I just needed a friend who owns it. Still, I'm glad he does own it, because we play it about once a month, and we always have a whole hell of a lot of fun.

This brings a close to the dungeon crawl series, and I am a little sad to see it end. It has been great fun writing these reviews, and even more fun playing the games. Next week I'll have some more standard reviews, but I may just open the week with a review of hopscotch, just to ease back into it.

Pros:
Incredible miniatures
Great map-building
Really exciting and diverse
Lots of tactics and maneuvering, with a body count any psychopath can be proud of

Cons:
Poorly organized rulebook
Rather long game
You'll have to look something up

For the first time in two weeks, here is a link where you can buy this game:
http://www.fantasyflightgames.com/descent_va11.html
Posted by Matt Drake at 8:58 PM

I already own this one - and I agree with your review. The sculpts are really nice, to bad they don't paint them, he he.
I have not played this one yet, I have read all the rules twice now, but getting people to commit to a 4-5 hour game is tough down her for me, but I will play this one yet.

Anothere great solid review - I too will miss the dungeon crawl games.


try and review Dungeon Twister, I really want to get that one soon.

Way ahead of you:

I live on a lake (the largest within California) and own both Descent and a boat ... now, all I need is a friend.
:-(

Nice review and now all I have to do is go out and get Road to Legend (and a friend, of course) ...

Great Review. After reading your review and doing some research on the web there is no way I could not buy this. I am now waiting on the UPS man to deliver my copy. Hope I can play this weekend! thanks for the great reviews.

I love this game, own it, but rarely can break it out because of the time to setup, play, and put away. My friends and I are on tight schedules, so sadly this game doesn't get played. I'm actually contemplating selling/trading it off.
My Hero Quest & Warhammer Quest will suffice just because they are easier to jump into a game.

The chap is completely right, and there's no skepticism.