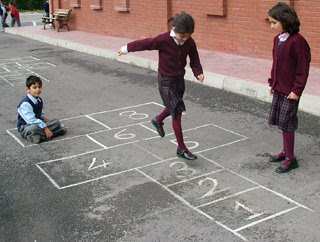 When reviewing games designed for children, it is important to consider how well those games can be enjoyed by adults. Generally, playground games are not considered proper adult fare, but some of those games can, occasionally, have some merit.

Hopscotch is not one of those games. Hopscotch has so little to recommend it as a game that it is almost more like a playground diversion than an actual game. There is very little luck - in that, it resembles a Euro game. It also has rules simple enough to have been designed by Reiner Knizia.

The game consists of two components. The first component is a chalk outline drawn on asphalt or sidewalk. This diagram has a series of numbered boxes, most placed in a vertical line, but often with one or two placed horizontally.

The second component is a rock, and that speaks volumes about the quality of this rather insipid little game. Adults are going to find the components for this game crude and unattractive. Obviously, this is going to affect their desire to play this silly game, and overall call into question the intelligence required to commit time to such a miserable pastime, especially when you could be playing Risk: Black Ops or Descent (both of which have fantastic components).

The rules for Hopscotch are just as simplistic as the components. A player simply throws the rock into a numbered square, hops to it on one foot, then bends to pick it up, still standing on one foot. Then he completes the pattern, landing with only one foot on the vertically-aligned boxes and with both feet in the horizontal boxes.

As you can see, very little strategy or forethought is required to be skilled at Hopscotch. You simply throw a rock and then hop around a little. Even Reiner's boring games have more substance than that. And yet, children all over the world play this game, and seem to enjoy it.

Thank God adults generally know better, and can see this simple-minded game for what it is - a poor way to spend your time. Adults know that they should be playing Key Harvest or Last Night on Earth, or any other games that have intellectual depth and far superior components.

Of course, to be perfectly fair, it should be noted that children who have resorted to playing Hopscotch generally do not have access to Heroscape or to such wonderful games as Battlelore or Dungeon Twister. But if they were to simply get online, they could find many games that they could print and play, or even rules for old classics that they could recreate from whatever they had on hand. Sadly, children who play Hopscotch seem to lack the creativity and competitive spirit to cobble together even the simplest board games.

If your children insist on playing Hopscotch when they could be playing Age of Gods, you may need to check this link for advice:
http://www.iser.com/
Posted by Matt Drake at 5:51 PM

Have you checked out the reissue of Hopscotch by MayFair Games, though? The rock is MUCH better than those usually found in the driveway, and the rules are much more streamlined. There are even illustrations so that your dropped-on-his-head cousin can understand.

And if that isn't enough, there's an expansion planned that allows a fifth player and includes solitaire rules.

I would have never thought of Hopscotch as a board game, and yet there is the board drawn right on the ground.
Sounds like someone didn't have time for a real game this week, or someone was stuck playing hopscotch with the kids and lost - you can be honest with us, Your Kids beat you at Hopscotch?

Matt, you've apparently been playing the American version of Hopscotch. The European version is a much nicer version, and is not simplified for children. The first difference is that it doesn't use a rock; it has a nice wooden piece. The second, and more notable difference, is that it uses all of the same rules except for one additional rule: as the name implies, players hop while holding a glass of Scotch. When you get to the space that your wooden piece landed on, you drink the contents of your glass then bend down, pick up your piece, and walk back to the start. It never really caught on as a game because most players simply dropped their wooden piece on the number "1" and just stood there and drank.

Funniest writing in a while. Even as a kid I could never understand the 'game' part of hopscotch. I guess I wanted it to be a game.

You're good. In a game review that should never be reviewed where children could possibly read it (it is sort of like discussing the variable reality of Santa in the company of small children as they may actually learn some semblance of truth) you mention one game designer (Reiner Knizia) and without missing a beat you go on to plug 10 games (Risk: Black Ops, Descent, Key Harvest, Last Night on Earth, HeroScape, Battlelore, Dungeon Twister, HeroQuest, Condotierre, and Carcassonne). That can't be easy to do.

My only negative thought about your review is that Hopscotch can actually be play with a single component ... A rock ... It can double for the chalk if it is of a soft enough igneous variety!

... I have never even once played Hopscotch as I could see no challenge in the game, sort of like the futility found in Tic-Tac-Toe.