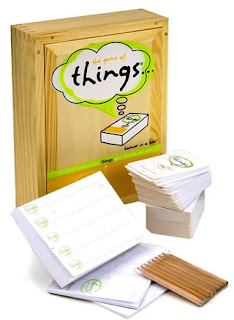 I'm pretty skeptical of party games. For the most part, they're rehashed crap. Most of them could be played without actually having to buy anything, and most of the best party games don't require any components at all (like Truth or Dare, Have You Ever, or Quarters. OK, Quarters has components, but not many game companies are going to start selling rolls of quarters and pitchers of beer). The end result is that, while I see lots of party games, I don't tend to like very many of them.

The Game of Things, from Hasbro, is one I like. In fact, it's one of the few I break out on a regular basis. It has the potential for a huge amount of hilarious fun, and it's equally playable with a room full of teenagers or a geriatric nursing home. Like nearly every party game ever, it relies on not playing with idiots to have fun, but I think that applies to nearly anything, from Risk to water-skiing (there are exceptions - it can be hilarious to play Red Light, Green Light with a retard).

In Things (I'm abbreviating the name because I'm lazy), you've got a big deck of descriptions. These descriptions might be 'Things you would like to do with chocolate', or 'Things you would do if you could change genders for a day'. One person reads the description out loud, and everyone writes a thing that would be an answer, like 'eat it' or 'play Darjeeling.' Then you go around the table and take turns guessing who wrote what.

Like most party games, the actual scoring is almost completely irrelevant. You don't really care who wins. The point is to hang out and have fun with people you may or may not like, unless you're playing with my father-in-law, in which case the point is to be as horribly inappropriate as possible (when asked for 'Things you wish you could check out in the library', he wrote 'the librarian'. In all fairness, I wrote 'whiskey and whores,' so it was kind of a tie for worst place).

It's tough to write an in-depth review of a game as simple as The Game of Things. You read a card, everyone writes an answer, then you guess who wrote what. That's really it. It's not like there's strategy, outside playing like my son and writing answers that sound like someone else wrote them (like for 'Things cannibals think about while dining,' he wrote, 'I wish I had a good dark beer,' and everyone thought I wrote that. I wrote 'Mmm, tastes like chicken.') But even though it's not very deep, if you can get the right crowd of miscreants together, this can be a lot of fun. I've laughed myself through dozens of games of Things, although it's not always safe to play with kids (especially if you're playing with people who would answer 'Things you should not photograph' with 'your junk'. Like me).

Apparently, Hasbro was trying to appeal to collector-types when they made The Game of Things, because it comes in a really nice wooden box. There's no reason it couldn't have come in a cardboard box like every other game, but the wooden slide-top box is a really nice touch. And the pretty box makes people think it must be better than other games, which it really is not, but they don't know that, so they'll play with you.

On a scale that goes from Strip Spin the Bottle to Apples to Apples, The Game of Things falls somewhere around Taboo. It's a damned good time, but not as much fun as being 19 and getting naked with a roomful of pretty girls while you drink yourself into a stupor. But then, you can play Things with your in-laws, and if you play Strip Anything with your in-laws, please don't tell me about it.

Cons:
Deep as a kiddie pool (but it's a party game, so what did you expect?)

This one sounds similar to a game called Ink Blotz. Instead of Categories the players are shown Rorschach test ink blots and write down what they think each looks like. The other players then try to guess who wrote what.

It strikes me that many good party games have these two components: an opportunity to be creative, and a test of how well you know your friends.

Elstree, I think you make a good point - most good party games encourage you to be creative, and reward people who know each other. Ink Blotz sounds cool, too. I might have to look into that.

This review was so good you are off the hook for missing the next one, honestly, one of your funniest yet.