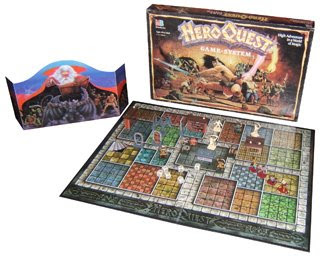 The first week of the dungeon review series was a warm-up. The old TSR game Dungeon is basically Candyland with green slimes, Dark World is more like a toy with some bad rules, and Dragon Strike is the almost-ran stepchild of dungeon games. This week, though, I'm pulling out the stops and throwing down with the big players of dungeon games. The opening act will be HeroQuest, widely hailed as the finest dungeon game ever created by fans all over the planet, despite the fact that the game has been out of print for almost twenty years.

HeroQuest was the kind of game that pimply nerds like myself dreamed about when we started playing D&D. We didn't get into roleplaying games so we could explore our characters' motivations or sit in the dark with our platonic partners and reenact sex scenes with barbarian queens. We got into Dungeons & Dragons because we wanted to pick up a big weapon and chop a bunch of subhuman monsters into little wet chunks, then we wanted to steal their crap. We didn't bother with in-character dialog, or story-driven characters, or the angst of discovering where our half-drow rogues fit into a society engineered to hate them. We just threw fireballs and asked questions later.

So when HeroQuest came out, it was a must-buy game. I played this game with my little brother until we had finished the scenarios that came in the box, then we bought the expansions and played those, too. It's no wonder the game maintains such a magnificent fan following - if even a fraction of the gamers who bought this off the shelf at Kay-Bee Toys enjoyed it as much as I did, they'll remember the good times until they're too old to roll dice. Hell, I played it with my kids, and it was good times all over again (or as good as times can be when you're trying to get two grade-school siblings to quit arguing long enough to decide whether they want to open the door or not).

HeroQuest has an incredibly simple combat scheme, but one that is still quite clever. In fact, it's so clever, it has seen use in many games since, including that gaming juggernaut, Heroscape. Your character rolls attack dice looking to get skulls, then bad guys roll defense dice hoping to get shields. Shields cancel skulls, and any leftover skulls are worth one point of damage apiece. Weak monsters like goblins have just one body point, and a single skull will kill them; the dreaded gargoyle has three body points, and with five defense dice, is not likely to lose them in a hurry.

The miniatures in HeroQuest are just plain great. In fact, they're so great, I went and painted all the orcs and the heroes. I would have done the rest of the monsters, but I'm not much of a painter. These are the highest-quality figures in any dungeon game that came before or after for at least a decade. In fact, these are often better figures than you could buy from Ral Partha. Not only are they detailed, but they have so much character that you want to break out whole armies of bad guys just to look at the figures.

The game board is a little funny, though. At first glance, it's actually kind of ugly. It's just a bunch of dungeon rooms, all walled off. Long corridors connect the rooms, but without doorways, there's no way to get from one room to another. But what might look like a liability is actually one of the greatest strengths of HeroQuest.

See, all these rooms can be made into a dungeon simply by placing the little door standups that come with the game. The bad guy controller (called Zargon, in what is probably the silliest name for a dungeon master ever made) has a map that shows where there are doors, and traps, and monsters, and treasure chests, and desks and fireplaces and tables and lots more stuff. When the heroes enter a room, he pauses the game long enough to put out all this stuff. And then the previously rather bland map comes to life, because now there are actual three-dimensional tables, torture racks, and tombs, because one top of coming with a big fat pile of awesome miniatures, HeroQuest comes with an enormous quantity of beautifully-sculpted dungeon dressings. Suddenly the bland and slightly ugly map becomes a fully-articulated dungeon, complete with skeletons in hidden chambers and pentagons in the wizard's lair.

Treasure collection can be dicey for the heroes. They can search the bodies of their fallen foes, but as they do, there's a chance more monsters might find them. Or they could trigger a deadly trap. Or they might just fall through a crumbling floor and twist an ankle. But what mostly happens is that they find gold and jewels and potions that they can use to improve their chances of success.

Every scenario in the base game follows a story line. The heroes trek through progressively more dangerous dungeons in their quest to defeat the Witch Lord and become champions of the realm. The same board is used every time, but it is so incredibly versatile that every adventure is different. HeroQuest is simultaneously a great game, in terms of tactics and strategy, and an exercise in imagination. You can almost hear the barbarian warrior screaming a lusty battle cry as he impales a chaos warrior on his trusty sword.

Between adventures, heroes can buy better gear. This is actually fairly crucial, because it's the only way they improve. Unlike D&D, where your character actually gets better at hitting things, the only improvement HeroQuest characters can see is by shopping. In that, they're a little like Paris Hilton - no matter how much crap that girl buys, she continues to be just about worthless as a human being.

And that is my biggest complaint with HeroQuest. I want my barbarian to get tougher. I want my wizard to learn how to do more damage with a fireball. I want my dwarf to get better at disarming traps. It's all well and good to get better gear, but after spending half a year playing this game, I really want to see my heroes be better, with or without a truckload of gear. After all, there's only so much you can get at the store, so unless they can pick up magic weapons in dungeons, they've got a definite ceiling on their rise to power. And that ceiling means that Zargon can't ever trot out new bad guys, either - you'll play 14 missions and still be fighting orcs and goblins.

But that little oversight is not too painfully dramatic. Milton Bradley figured out pretty quick that they had a hit on their hands, and dutifully released a bunch of expansions. Several of them - like the Barbarian Quest Pack and Against the Ogre Horde - had more kinds of monsters, and many of the expansions had rules for more powerful foes. More artifacts and magic stuff were in there, too, so you could get a little past the rudimentary weapon set that came with the base game.

Even writing this review has me jonesing for a little HeroQuest, and is just about to send me on a shopping spree to see if I can pick up some of those expansions I don't have. Sure, I've got Kellar's Keep and Return of the Witch Lord, but I really want the European-only releases, and the character quest packs, and the adventure design pack, and... you know, I may need to get a night job. I don't even play this game any more, and I still want to pick up all those expansions. Because the game is that good.

Cons:
Will make you want to spend a lot more money

If you're into dungeon games, you know HeroQuest. If you don't have a copy but wish you did, you can almost always find a few on eBay. The question is whether or not you want to mortgage your children for an unopened copy.

EDIT: When I wrote this review, I meant for it to include links to Aginn's Inn, an absolutely amazing HeroQuest fan site. Sadly, that site has shut down. Happily, there are a couple good fan sites still out there:
http://www.geocities.com/theferret1/heroquest.html
http://games.groups.yahoo.com/group/HeroQuest-Boardgame/
http://heroquest.drathe.com/
http://www.doyouhq.com/
Posted by Matt Drake at 6:58 PM

I never played this one, but I after your review I love it. I was to in to AD&D I think to get a game like this, but man it sounds like the perfect game to play with kids to start them on the road to Fantasy gaming.

In that, they're a little like Paris Hilton - no matter how much crap that girl buys, she continues to be just about worthless as a human being.

Simply the best review on HeroQuest I've ever read. Concise, yet captures every detail and emotion for the game.

I just want to add a link for the fans of this game:

It's an italian site, but full of talented people that still writes new cards, PCs and adventure packs.

I'm sure that you can find something interesting even if in italian, and also i think that the site admins will be happy to have someone that translate theyr works in english to spread them out in the world.

Ye Olde Inn formerly at http://heroquest.drathe.com/ now has its own domain at:

This is the game that brought me into the world of miniatures and dungeon crawling. To me, it's a classic, and wonderful in every way.
I own two copies of this game just to have extra minis, everything is painted, and I've also bought alternative miniatures just to spice up the look of the game.
I've also found the expansions available for download. Not sure how you feel about that, but for me it seems fine considering it hasn't been in print in nearly twenty years.

I actually prefer this to Descent for one factor only: setup, play, and packing up is extremely minimal. I have little time for gaming, I'd like to spend as much time as possible playing the game rather than rule reading and setting up.