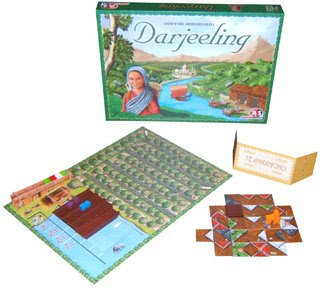 I think there should be a new classification of games. We've got the basic split of Ameritrash and Euro game, but I think we should add 'Ladyboy' games to the mix. Euro games have mostly abstract violence, if there's violence at all, and are mostly about non-violent things like farming and going to parties. Ameritrash games are all about the body count, with the winner generally determined by a last-man-standing rule. And for the new Ladyboy segment of games, there is no violence at all - the games are so tame that if you get hooked on them, you might as well tuck your manhood between your legs and walk like a girl. These are not abstract games - they actually have themes. It's just that the themes are so sissified that manly men will crave hard liquor and fistfights after the first turn.

Darjeeling would be my candidate for the first game in the Ladyboy classification. This game is imported from Europe by Rio Grande, and in all fairness, is not a bad game. But the theme will make even the most effeminate heterosexual men wonder how they got talked into playing. Because in Darjeeling, you collect tea.

Yeah, you read that right. You collect tea (not even coffee!), and then you sell it, and then you collect more tea. The board is made of tiles with half-crates of tea on them, and you move a little wooden tea collector around the board and pick up the crates. You hide them behind a little screen and when you can use the tiles to build whole crates of tea, you can ship the tea off to the little ships that await your thoroughly unmanly beverages.

In all fairness, there is quite a bit more to the game than simply picking up crates of tea. If it weren't for the theme, the components would be 100% kick-ass. There are wooden boats that fit into slots in the board, and a cardboard ramp that holds round tokens so they roll when you pull one out. The little tea collector guy isn't even dorky or anything - he looks like a dude pushing a box, but he's made out of wood, and he's pretty cool. Hell, the components would almost make you decide to stop flirting with men, if it weren't for the fact that they're all there to help you collect tea.

There are four kinds of tea, so there are four different colors of half-crates on the tiles you can pick up. The rolling ramp tells you how much demand there is for your tea, so you can make sure to get the best possible price for your tea. Sometimes you may want to hold off shipping our collection of lovely green tea to wait for better demand, and sometimes you won't mind having to pay a little cash to jump over spaces or ship long distances, if the tea you have is in demand. And sometimes you'll wonder if it might not be a good idea to change out of your hot pants and halter top, but if you're still collecting tea, you may want to wait on that.

The thing is, the theme actually works really well with the rules. The fabulous (yeah, I used that word on purpose) components really lend a feeling of wandering around the countryside, picking up choice selections of tea from exotic locales and sending them by boat to England, where poncing aristocrats will comment on how much they like your red darjeeling (that's tea, it's not a euphemism for anything).

As much as I feel nearly obliged to hate a game that fits so well into the Ladyboy category, Darjeeling is still a Rio Grande game, and I've yet to find one of their games that isn't actually a pretty damned good game. It's a little confusing the first time you play, but it doesn't take long to start seeing how important planning, timing and strategy will be if you want to win. If you ship early, you may get a good running start on the other players, but if you wait to ship, you could wind up getting a much better payoff, and even cost the others some money as their tea becomes devalued. It's an incredibly clever game, but for God's sake, it's about collecting tea!

OK, even if it means I have to buy a shirt that labels me a 'Gay-mer', I have to admit that I really like playing Darjeeling. There's no dead people. There's not even any alcohol or dames or loud cars. There's just the typical Rio Grande genius for picking games that Europeans make and selling them to us white-bread, meat-and-potatoes Americans to make us feel like Ru Paul when we love to play them.

Not everyone will love this game. Many men would rather shove hot needles into their foreheads than admit to liking a Ladyboy game. But if you can get past the completely emasculated theme, you'll realize that Darjeeling is actually a really good game.

Now, if you'll pardon me, I'm off to pick out some lip gloss.

Pros:
Really great components
Good planning and strategy
Clever - don't know how anyone thought of the game mechanics, but they're smart

If you're comfortable with your masculinity, or just never thought that collecting tea was a sissy game, go here and get a copy of Darjeeling:
http://www.funagain.com/control/product/~product_id=018324
Posted by Matt Drake at 8:40 PM

You had me laughing out loud again, thanks. This sounds like a game for the ladies I have to admit.

Are you sure there wasn't an advanced section where you get to kill the tea, or maybe it is poisoned tea and whoever kills the most people with it wins? Maybe we could fill a scarecrow with tea and beat the s*** out of it ( or tea out of it )?

Thanks for sharing, another great review.

I think the games made it here to Costa Rica, and may make it on the plane to me today, if not tomorrow, thanks again.

Maybe they should have used the same mechanics to make a game about gunpowder or beer or punching some guy in the face.

Played this at 2009 DexCon. It was a rather odd game, and I'm not sure I liked it enough to pick up a copy of my own.