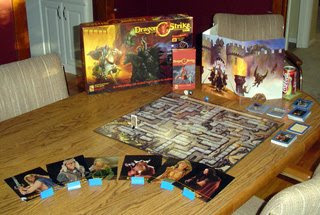 The late 80s and early 90s were great times for dungeon gamers. HeroQuest was all the rage, and was only improved by Warhammer Quest. TSR was quickly slipping as the only dungeon gaming company in town, and to try to gain back a little lost ground, they came up with their own answer to HeroQuest. Unfortunately, their game wasn't as good as HeroQuest, and so ended up sliding quietly into obscurity.

Dragon Strike was, in my opinion, mostly bad timing, which was kind of par for the course when it came to TSR. If it had predated HeroQuest, it would still have dozens of fan sites and it would have spawned a half dozen expansions. If it had come about five years later than it did, it would have been a breath of fresh air in a rapidly stagnating dungeon market, and might have even held off the fall of the mighty TSR for another year or two. But coming right on the heels of what would turn out to be the barometer against which all other dungeon games would be measured, it just never really had a chance. It didn't catch on, and slipped out of print and into thrift stores everywhere.

It's kind of a shame, really, because Dragon Strike is a cool game. The miniatures are decent, for what they are, and there are plenty of them. The game incorporates a lot more roleplaying than any other dungeon game, including rules for letting players do stuff that isn't in the rules. Of course, it was made by TSR, publishers of the dreadnought of Dungeons & Dragons, and so they were willing to be a little fast and loose with rules requirements.

Combat in Dragon Strike is easy, but still manages to be exciting. It could take a little while to clear a room, unlike many dungeon games where the bad guys are like paper dolls wearing 'kick me' signs. Each character - monster or adventurer - has an armor class, and you roll a single attack die, trying to beat it. If you do, the target takes a point of damage. An orc only has one hit point, so you can smoke him in one shot, but the troll has three, and the dragon has eight. Not only that, but sometimes these bad guys can pack a wallop, so sticking around for a long brawl has a serious downside.

Another serious downside of long battles is that the heroes are on a timeline. Turns are counted, and after 20 turns, Darkfyre the dragon enters the board, intent on cooking up some hero munchables. Darkfyre can burn all the heroes at once, moves fast, hits hard, and takes a long time to kill. If you have to fight him, you're doing something wrong - but that problem is likely to rectify itself, because if you are fighting Darkfyre, you probably don't have much time left to make mistakes.

Two double-sided game boards come with Dragon Strike, and each side details a different adventuring environment. One is a natural cavern, one is a classic dungeon, another shows a forest glade, and the last is a castle. Unlike many other dungeon games that came after and before, and are a great deal more customizable, these boards don't change from mission to mission. The Dungeon Master might cut off one passage with a fallen rock, or decide that one door doesn't go anywhere, but for the most part, after you play four different boards, you've played them all.

The boards are actually a good news/bad news sort of scenario. They are really well done, and boast some great art. It's a lot easier to get into the mood for dungeon crawling when the board has skulls on the floor and bubbling mud pits. The boards in Dragon Strike make HeroQuest look downright drab.

But the real problem is that you've got exactly four maps to throw at the heroes. You can't say, 'pretend this is a snow-blown mountain top', because it's pretty obviously NOT covered in ice. It won't ever be a desert temple, and the heroes will always know exactly how many exits lead out of the next room. You can't surprise your heroes with new maps, and you're really limited in where you can put your adventures. So that sucks.

Another suck factor was that the graphic designers responsible for most of the game would have been better off as janitors in a Thai brothel than making art. The character cards are not just bad, they're flat-out horrible. Each character card has a really bad photograph of some total douchebag pretending to be a D&D hero. The warrior looks like he just left an 80s hair band, and he's not even ripped. The wizard is wearing a ludicrous hat made out of a coyote, has stupid green face paint and nostrils big enough to hide a B-52. The elf is downright geriatric, and the dwarf has to be seen to be believed. It's almost embarrassing to get the game out of the box.

As if this disaster of design decisions wasn't enough to make Dragon Strike a running gag, the makers of the game thought it would be a good idea to tie in with existing technology - in this case, VCRs. The game comes with a video that is easily one of the most horrible things ever made. Sitting down to watch this video tape will either be horribly uncomfortable or a complete laugh riot.

Ugly designs notwithstanding, Dragon Strike is not a bad game. I know I said that already, but it's worth repeating. The game had legs. Sadly, they weren't as nice as HeroQuest's legs, and so all the boys wanted to dance with HeroQuest and left poor, dejected Dragon Strike to go home alone and cry itself to sleep.

Dragon Strike is really an unfortunate experiment. It should not have been made if TSR didn't want to do it right. They should have hired better sculptors, hired illustrators instead of autistic models for the character cards, and put a little work into the reference cards. Done right, Dragon Strike could have been pretty damned decent, and maybe even given HeroQuest a run for its money. For many gamers, Dragon Strike might have even been better than HeroQuest - the option to perform feats and do stuff that wasn't in the rules is the kind of thing that will appeal to RPG fans. But in classic TSR style, they did the job halfway and released it at the worst possible time. For most gamers, it blipped on their radar and then faded away, forgotten in the search for the next HeroQuest expansion.

If you're looking to try out an easy dungeon crawler, you can do a lot worse than Dragon Strike. I still dig this out and run it now and then, even though it's in such bad shape that I had to borrow the photo from Jormi_Boced at BGG (thanks, Jormi!).

Cons:
Photos of retarded people - not a good design decision
Only four boards
Piss poor timing on the release


Yes, you guessed it - another game without a link. What can I tell you? They just don't make dungeon games like they used to do.
Posted by Matt Drake at 5:17 PM

Wow. Man, does that Dwarf have a small...axe.

Doesn't sound so bad. How hard could it be making your own maps? so expand it a little?

Thanks for a solid review, I hope I can find this one thrifting some time?

The bit about the video got me curious, and yes, it is available on youtube! Bear with this guy; the actual game video starts about 3 minutes in and runs with his MST3K-style commentary in the background.

His jokes are a bit hit-or-hiss, but mostly hit, and honestly, without his commentary the thing would be unwatchable.