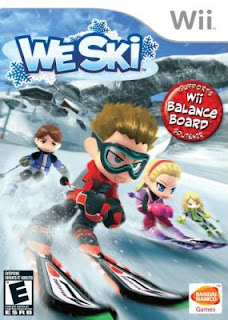 Way down deep inside, I'm just a child. I mean, outside making childish jokes about body parts and bathroom habits, I'm just a big ol' kid (but with gray hair and a bald spot). I try to deny it whenever possible, by drinking dark beer and playing games where I get to kill things.

So when my wife bought Wii Fit and We Ski, I turned up my nose. They were far too silly and childish for me. She can do the hula hoop exercise, and try to float down the river in a rainbow bubble - I'll stick with blasting aliens until their arms come off, and then stomping a mudhole in their green-blooded corpses.

And then she started playing We Ski. Passing through the living room on my way to wrestle a grizzly and chew a bicycle in half, I saw her laughing and waving around those goofy controllers and genuinely having fun. And my inner kid decided to give the grizzly a break. Instead I picked up a pair of those ridiculous wand controllers and jumped in on the action.

It took about two minutes to be totally hooked. I gave my Mii a cool ski jacket and bitchin' skis, and then raced some loser down the mountain with my wife right behind me. Then we skied some slaloms, then moguls, then I went off a ramp and did a back flip in the air.

Yeah, that's right - I flipped over in the air. On later runs, I did a bunch of other silly stunts, too. It was awesome. Even when I hit the ground on one ski, slid sideways into an embankment and went down the rest of the hill on my face, I was having a blast.

And those few competitions were just the very tip of the snow-covered mountain. The enormous free ski mode lets you explore this gigantic mountain with nine different runs, varying in difficulty from really easy to prepare-to-meet-your-maker. One run might be a winding, twisting path through the forest, another is iced over and scary fast, and yet another has moguls and jumps and terrifyingly steep slopes. Each run requires a different set of skills - one will see you attempting crazy flying stunts, while another has you tucking your poles under your arms and crouching as you hurtle downward, hell-bent for leather.

And the mountain is alive. Well, not really - there are no animals, and it's not like the hills actually have eyes. But there are fellow skiers all over the slopes, and they'll challenge you to races or stunt contests or tests of skill. Some people want you to find stuff for them. Others want to take your picture. Still others are just really stupid, and run into you no matter how hard you try to ski away from them, making me wish there was a hack that let me whip out an Uzi and plug their sorry asses for ruining my score.

At times, We Ski is really irritating. Sometimes it doesn't feel like the controls respond as quickly as you might like (my biggest problem with Wii games in general, actually). Sometimes you'll have a perfect run, and then some asshole will ski right into and send you tumbling. And sometimes, it'll just be kind of dull, as you wander between ski runs, looking for the elusive ice cave or the bell on top of the mountain.

The biggest disappointment is the Wii Fit balance board. My wife does so much stuff with Wii Fit that I know that board can do a lot. But all you do when you ski on it is lean left or right to steer. You can't even brake by leaning back or speed up by leaning forward. The board can be used for a lot more, but We Ski is actually easier to play without it, meaning that you could buy the game and enjoy it even without having Wii Fit.

So it's not Grand Theft Auto. So you'll probably get bored after a month or so. It's still a hell of a lot of fun, and you can release your inner eight-year-old for a while and just enjoy the slopes. If Tony Hawk does a skating game for that crazy Wii board... well, if they do, I hope it's twice this good, but even if it's not, I'll play the crap out of it. Because when a game makes me forget that I've got clients waiting, and a mortgage, and deadlines and bills and chores and errands and just throw myself down a mountain, it's worth every penny and then some.

Pros:
Easy to learn control scheme that will take a while to master
The whole mountain is available right from the start
Lots of unlockables and customizables (neither of those is actually a word, kids - don't use them in your term papers)
Relaxing and fun and slightly addicting

Cons:
Not much point to the Wii Fit balance board
Can get slow
No guns, axes, chainsaws or bazookas, but plenty of people you may want to kill

We Ski has me enjoying more time with my wife than I have for a long time. I suggest you run right out and get it. You can get it here:
http://www.amazon.com/Namco-80010-We-Ski/dp/B0015HZLUQ
Posted by Matt Drake at 8:38 PM