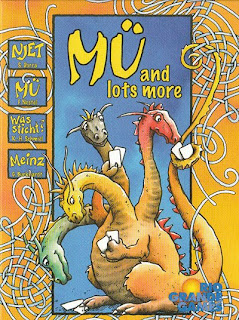 I despise the umlaut. That's the little widget that puts two dots on top of a letter 'u'. Unfortunately, the umlaut is pretty popular in Germany, so popular, in fact, that they include the little bastard in their alphabet.

I don't have rational reasons for hating the umlaut. It's more like when a person really can't stand asparagus or collared greens. I guess if I thought about it, I would say that I hate the umlaut for two reasons. First, I don't know how you pronounce it. And second, I don't have one on my keyboard, so if I actually want to type the umlaut with a couple dots on it, I have to go to a considerable amount of trouble (one of the few times I wish I wrote this site from a Macintosh). But rational or not, I dislike the umlaut enough that I sometimes swap it out for curse words.

I got a game from Rio Grande that's called Mu and Lots More. It's actually four games in one, all with odd names (unless you're from Germany), and one of them has one of those hell-inspired umlauts. Since I'm not going to a ludicrous amount of trouble just to include the umlaut in this review, you have two options. You can either imagine that the 'u' in 'Mu' has two dots on top of it, or you can mark on your monitor with a pen and write them in yourself. Personally, I would choose the first option, but that's up to you.

Everyone has an equal number of cards (usually their share of all the cards in the deck). One person opens, or plays a card face up. If you have a card in that suit, you have to play it, and if you don't, you can play something else (like trump cards, which beat suit cards, unless the suit is trump. Card games have weird terminology.) For the record, I suck ten kinds of umlaut at trick-taking games, especially against my wife, who is to trick-taking games what Amarillo Slim is to poker. But I still like to play games with my wife, even when I get my head handed to me, so I play trick-taking games regularly.

These four games all start with trick-taking, but they use customized decks built from the 160 cards in the box (no game uses all the cards), and then they get crazy. Like in Njet, where you get your hand, and then you take turns blocking out spots to decide what will be trump, and supertrump, and how many points each trick is worth, and other stuff. This lets you turn a horrible hand into a brilliant hand, or if you're me, it lets you turn a great hand into a stinking umlaut of a hand.

The other games are just as wacky. Was Sticht (yeah, all the games are hard to pronounce) doesn't even bother keeping score - you just have particular tasks, like picking up the last trick or taking no tricks or whatever, and you have to complete yours before your opponents complete theirs. In case you're curious, my wife beats the umlaut out of me at this game, too.

In Meinz, you're limited to taking only two tricks per hand, so you have to time your play to take the best tricks at the best time. And it's called Meinz because if you really want a trick, you can just holler, 'Meinz!' and then it's yours. Also, when you holler 'Meinz!', French resistance fighters will come and punch you in the umlaut.

The title game, Mu (insert your own umlaut, should you so desire) is the most complex. In this one, you bid your cards to decide who is the chief and who is the vice, then you can play some of those cards that you bid, or not, and there might be two kinds of trump, and there are other rules complicated enough that they are confusing as umlaut.

Now, I may not be a fan of the umlaut, but I really like three of the four games in this box. They remove a lot of the luck from cards - you can't complain as much about having a bad hand, because more than any other card game I've played, what you have matters less than how you play it. I don't like Mu because, on top of having an umlaut in the name, I can't figure out how to play it. I know that's pathetic, but we tried and failed to play Mu, and so I'm out.

But don't let the confusion of Mu stop you from buying this box of card games. For one thing, you may be able to figure out the game and end up liking it a lot - I can't say, you may be smarter than me. For another, the other three games are awesome, and really favor the good player over the lucky player (which means I am umlaut out of luck every time). If you like to play cards, pick up Mu and Lots More. You'll be glad you did.

Cons:
It hurts my head to try to figure out how to play one of the games
There are way too many umlauts

I heartily recommend Mu and Lots More to anyone who enjoys trick-taking card games. You can get it here:
http://www.funagain.com/control/product/~product_id=018021
Posted by Matt Drake at 10:05 PM

It sounds like some fun variations of classic games, but one thing drove everything else out of my head.

I keep hearing "Breakfast in America" but with lyrics about not looking at my cards and the games having better names without umlauts in America...

This one sounds like a whole lot of fun, and I love the idea of 4 games in one, something for everyone. I guessing if you couldn't figure out Mu, I got no chance, but then if I can I will be like that Matt ain't so smart after all...............

Nice review of a great combo of trick-taking games...and the highlights for me are either Was Sticht? with 4 people or Njet! with 5 people.

I agree that Mü is a little on the complicated side but its just an auction and then a game...not much more than that...once you figure it out (which did take me some time).

This is a great 4 games to add to your collection...