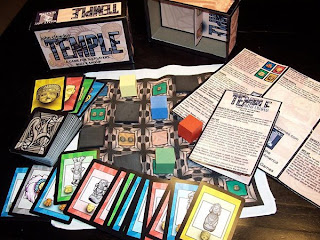 If you're a regular Drake's Flames reader, you've seen me go on at length about how great the games are that come out of Small Box Games. Dirge, Elemental Rift and Politico are really cool games, and they deserve every bit of praise I ever gave them.

But you kind of have to take my praise with a grain of salt, because I don't make any secret that the guy who makes the game, John Clowdus, is my friend. And you can't give your friends bad reviews, right?

Well, I'm really sorry, John, but yeah, I can. I don't want to at all. I want John to make nothing but brilliant pearls of games that make me want to quit every other game just to play Small Box games. But nobody knocks every pitch out of the park - just sniff around any big game company, and you'll be able to find some stinkers. John has made four games in less than a year, and three out of four, to quote my good friend Meatloaf, ain't bad.

The game I'm about to beat down like an ill-behaved teenager is called Temple. It's classic Small Box - great wood pieces, cloth map, neat cards, all in a nice, compact box. But where it falls apart is when you actually break it out and play it.

I tried this game several times. I tried it with just my wife, and we both finished and looked at each other and said, 'uh, where's the game?' So I figured maybe it was better with four, and tried again. And again, we finished up with the feeling like we had been expecting vodka and got dishwater. After the third play (we played the alternate rules this time), we just felt like Temple was like day-old popcorn with no butter or salt - it looks like it should be good, but ends up being empty and bland.

The premise seems like it should be interesting. You wander around a temple, trying to curry favor with the ancient South American gods by making sacrifices or dodging curses. Only there's just not much to do, and it seems like the winner is made by a completely arbitrary set of conditions over which you have virtually no control. Movement is dictated almost entirely by where you start your turn and what cards you're holding, so it's rare to have an opportunity to make a tough decision.

If it was put together differently, Temple could have promise. Part of the problem may have been the theme. If the theme had been deliberately aimed at kids, I would have thought it was pretty darn cool. If you wander around a magical land trying to buy magical fruit, and the art was all cutesy and kiddie, this might have worked. As a game for children, Temple shows promise. For nearly any discerning gamer, Temple will be painfully boring, and you may not want to try to get kids to enjoy a game where you make sacrifices to Mayan deities. If they were mall shopping, that might work, because it would change the target market.

I really hate to have to pan a game from Small Box Games, and not just because John is a friend. He's making a really great run at a really tough gig in a painfully competitive field, and he's doing damned well. Dirge sold out in less than two weeks, because it's a great game and people are figuring out that Small Box Games kicks ass. John's games show integrity, and the materials he uses show that he loves making games, and wants his fans to enjoy them as much as he loves making them.

But if I were to give Temple a good review, it would compromise the entire reason I started Drake's Flames in the first place - to have the chance to be perfectly honest about the games I play, and not cater to publishers, or readers, or editors. I love skewering a bad game from a big publisher and roasting it over an open fire. I love being able to break loose and compare games to snot, or poop, or prison sex. If I start lying about whether or not I like a game, I may as well quit writing and start selling lemons at CarMax.

So if you can find Politico, Elemental Rift and Dirge, you should buy them. And you should not buy Temple. Just don't tell John I said that.

Cons:
Not very much game here

If you really think you need this game, here's the perfect food to go with it:
http://www.buythecase.net/product/7929/hytop_unsalted_tops_saltines_crackers/
Posted by Matt Drake at 9:36 PM