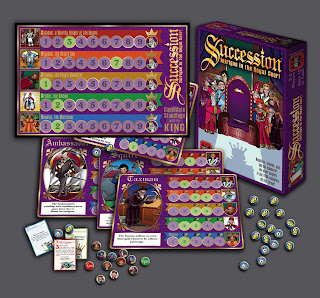 Board gaming is one hell of an unfair market. Hundreds of games get made every year. One or two always come out swinging and do really well, bunches more hang in there and turn a profit, and some get completely forgotten. And to make matters worse, some of those really hot games suck like the vacuum of space, and some of those that get forgotten are wicked awesome.

Take, for instance, Succession, from Your Move Games. This is a ridiculously fun game full of deal-making and back-stabbing, and yet almost nobody has ever heard of it. That's a damned shame, because if you break this out at a game night, your friends will love the game, and if you play it well, they will be hiding your body in the desert (which, now that I think of it, may not be a point in the game's favor).

In Succession, the king is about to die, and he's about to name an heir. The problem is, there's no chance it'll be you. You're just some scrubby hanger-on. But all is not lost - if you can get the next heir to like you the most, you'll be in a position of power that will let you get away with doing stuff like hiding fire ants in your enemies' underwear drawers or lighting bags of dog poop on their front porches (if there's a use for power that's better than making other people miserable, I don't want to know about it).

But the trick is, everyone at the table is trying to beat you to the punch. The squire is a big favorite with Galahad, the king's knight, the royalist is in good graces with both the king's son and his daughter, and the tax collector is cozied up to Archie, the bishop. So your character has two jobs - choose a candidate and become his favorite ass-kisser, and then get that candidate to become king.

Neither is an easy job, because while you're out sending flowers to the king and putting the merchant queen's name on the card, someone else is trying to sneak aphids into the bouquet. And if they do succeed in screwing up your grand gesture, they may even wind up taking the credit for sending the flowers in the first place!

The politics of Succession is played out in intrigues and votes. Players take turn starting intrigues, like hiring bards to sing songs about senile kings and then beating the crap out of the bards for offending the senile king. Candidates for the throne will have their standing with the king rise or fall, and the candidates will, in turn, give blame or credit for the intrigues to the players. The truth is completely irrelevant here. You might actually hire the bard in Ulysses's name, blame him for the bad song, and credit Archie for beating the piss out of him, without either candidate having even been in the country when the concert happened. And then you can spin it so that Ulysses blames one of your rivals for getting him in dutch, and Archie thanks you for working out the whole deal, whether you did anything or not.

It gets a little confusing, and may take a couple rounds to work out all the rules, but pretty soon you'll be making underhanded deals and selling your friends down the river. You'll steal credit for plans in which you never had a hand, then blame someone else for things you did. You'll lie, you'll cheat, you'll steal, and if you do it all really well, you'll win.

And then your friends will be hiding your body (hopefully that doesn't bother you too much).

My son and daughter love this game, and invented a new term for how they intended to pay me back for repeatedly cheating them out of successful endeavors - weasel-poo. Don't ask what that means, I just know that my daughter has made it very clear that she owes me one million weasel-poo. I figure I'll be paying back that debt when she's in high school and I keep having to tell her, 'you're not leaving this house wearing that!'

My wife, on the other hand, hates this game. She absolutely refuses to play it. That's something to keep in mind - not everyone is cold-hearted and devious enough to enjoy Succession. It requires the ability to detach the part of you that helps old ladies collect their social security checks from the part of you that steals the money after the checks are cashed.

So as much as I love Succession, it comes with a warning, something like, 'DO NOT PLAY IF YOU CAN'T LAUGH AT THE SPECIAL OLYMPICS.' If you're too nice, you'll just wind up with hurt feelings. But if you can put aside your instinct for hugging baby kittens and volunteering with the mentally handicapped, you can have a grand ol' time.

Cons:
Not for people burdened by things like conscience and sense of fair play
Components leave a little to be desired

If you like a little good-natured blood-letting among friends, you can get a copy of Succession right here:
http://www.funagain.com/control/product/~product_id=019217
Posted by Matt Drake at 6:09 PM

Oooh, that sounds fun. A couple of questions- how long does it take to play and what's it like compared to 'Intrigue'? Which would you suggest to start with for a backstabbing political game?

I don't know 'Intrigue'. This one takes about an hour or two.

Not one to play with the wife, but a couple of my gaming groups would love this one. I will be looking for this one when I hit the states.

Intrigue is much more intense and "adult". With Intrigue, the entire game is pure negotiation, and at some point you will likely go back on your word (or choose to lose). There is no way to "play nice" in Intrigue and have any chance at winning.

In Succession, you are trying to do your own thing and stop others from being successful. You can choose to negotiate with others to stop another player, or leave you alone etc. or you can stay out of the negotiation and try to keep under the radar. There's a light hearted feel to Succesion and it has a great "Back-at-ya" quality to it, that sometimes makes it a bit chaotic, but makes it loads of fun when you're spoiling someone's master plan.

Both are fun cutthroat games, but I think Intrigue does a better job at bringing out the Evil Manipulative Bastard side of people.

That said, I have to say I am glad to see this review. Succession is a game that I only played once at Gencon LA 04, and often wondered why I never saw it anywhere again. I got to play it with the designer explaining the rules and refereeing the game, with a copy of the game going to the winner. I had a blast and only lost because a soft-hearted friend of mine decided to backstab me in the last intrigue so that a guy who claimed to be a school teacher could win the game and play it with his "students". Right, as if.

MD, get a copy of Inrigue and play it with your soon to be ex-friends. The love you have for the game will more than make up for the loathing of people you care about.

Surely, the guy is totally just.