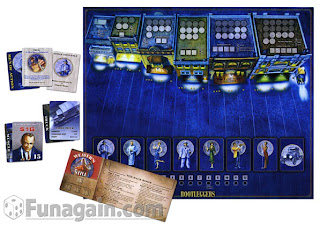 Gangster movies are awesome. And the best gangster movies are the ones about old-school gangsters like Capone (Untouchables was awesome - one of the few times Kevin Costner didn't make me wish he could act). So it stands to reason that a game where you get to be a gangster during prohibition just has to be good.

I was really lucky to get in good with Eagle Games when they were still a going concern, and Bootleggers was one of the first games they sent me (another was Blood Feud in New York, which was horrible despite being a gangster game). And since receiving Bootleggers, I've played it dozens of times, which is more than I can say for 90% of the games in my overcrowded office.

Bootleggers is a really cool mix of Euro and Ameritrash. You've got that Euro thing where you just wish you had one more thing you could do, and you set that against a kick-ass theme and a penchant for violent crime. There's not a whole lot of luck, but there's enough to give you a shot if you just suck at the game, and at the same time, there are moderating factors for the luck. For instance, if you roll really well and get to make a buttload of whiskey, the next turn, the copper comes to your still and smashes up all your profits. I'm pretty sure that happened to my uncle, only he wasn't making whiskey, and the guys who smashed up his garage were just junkies who stole his lawnmower. So never mind, that might not apply.

I'm not going to go far into the nuts and bolts of the game. God knows the game has been reviewed enough - if you want to know how it all works, go read one of the countless bland reviews posted by people who are literate, but really dull. I prefer to be interesting and illiterate. It's worked out so far (odds are, this one is going to be both illiterate and dull. That's what I get for not starting the review until 2 in the morning).

But I will tell you some of the coolest things about the game, like the influence markers - you use these to track how much control you have over the speakeasies in the game, which is, you know, fine, but then they're awesome because they're actually little gangsters with tommy guns and violin cases. And the little trucks you use to show where you're parking your whiskey actually have these flat beds that will hold the little wooden whiskey crates. These things are not necessary - they could have been cardboard counters or plastic sliders - but they sure are cool.

Another cool thing is the way you figure out who goes first. Having first crack at the new gangster recruits, still improvements, and trucks is key to winning the game - but it's not going to happen all the time. You don't roll a d20 and check for initiative (not that there's anything wrong with that). Instead, you hire some muscle, and the more you pay for it, the more you'll get. Only since the muscle is hired by playing from a limited hand of cards, if you blow your high cards early on, you'll be left with scraps and leftovers by the end of the game. It's important to time your big muscle purchases, and even then you can get into a gang war with another player and lose, even after you've hired every two-bit thug and gun-toting hoodlum on the street. I hear the same thing happens at the Irish Festival every year, but I haven't been in years. That might just have been me and the Guinness.

The game tends to build to the end, and while it is more fun than a jug of white lightning, it's usually fairly obvious by the end whether you have a shot at winning. A slow start won't cripple you, but it sure doesn't hurt to come on strong right out of the gates. You'll need timing, forethought, and just a little luck to win, but once you get far enough ahead of the pack, you probably have it all sewn up.

Bootleggers is a party favorite. I've been to at least three different parties where we played this wacky gangster throw-down. The rules take a little explaining, but once you get going, it makes sense and is really easy to play. And any game where you can hire a girl to distract an opponent, bang him and take all his money is good in my book. In fact, any time you can hire a girl to have sex and steal money is great, whether it's a game or not.

Cons:
Hard to recover - when you get into last place, you tend to stay there

Bootleggers is clever and fun with a wicked theme and little plastic mobsters. If you want to try it yourself, Funagain has it damned cheap:
http://www.funagain.com/control/product/~product_id=014887
Posted by Matt Drake at 11:56 PM

This one sounds like a great Gangster Game, And I got no Gangster games in my collection - so this one is going on my wish list. I think you did fine for 2 AM, I still chuckled over some of it. Of course Making fun of Kevin always makes me chuckle.

Sounds like a pretty cool game, I wonder if I can make a new rule like winner takes all.... takes all the booze in the house and drinks it until kingdom come!I might be pushing the envelope too hard here but at least I try

We tend to break out the Old Style beer when we play this one. Everybody has a great time :)

Really great post, Thank you for sharing This knowledge.Excellently written article, if only all bloggers offered the same level of content as you, the internet would be a much better place. Please keep it up!

So, I do not actually consider this may have success.

Thanks for the review (R in SDR)