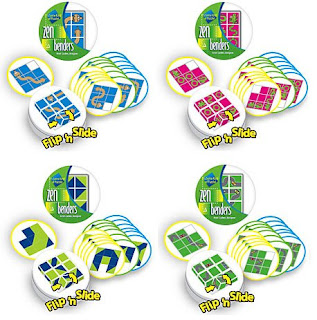 I'm often kind of hard on Out of the Box Publishing. Too many of their games look like they hire their graphic designers straight from podiatry school, and the games are often so simplified that they don't even need rules. So it's nice when I get something from them that I can say, 'hey, that's cool!'

Zen Benders are cool, and I appreciate that. Not only do I like the fact that they're pretty cool little puzzle games, but I'm happy with the fact that I don't have to compare their prospective audience with retarded children scooping paste out of a bucket with dirty fingers and shoveling it into their drooling gobs.

The best way to describe a Zen Bender is to remind you of those little sliding puzzles you used to get when you were a kid, where there's a grid of little squares and you slide them around until they make a picture. I used to love doing those little puzzles. If they made them with naked women on them, I would do them now. Sadly, they mostly depict bunnies and kittens and other stuff that's not really that interesting to an adult - at least, not one who appreciates boobs and whiskey more than puppies and wildflowers.

Zen Benders don't have naked women on them, either, but I can see past that deficiency. What they have are nine cubes in a little tray, with different images on each side of each cube. Unlike those old sliding puzzles, where you had exactly one image you could make, these let you make a whole bunch of pictures. The pictures are things like a really long wiener dog, or a race track, or a dragon. And you take a picture out of the bottom of the compartment and slide and turn the cubes until the image matches.

The rules are still really simple, but the execution is what's brilliant. Some pictures have almost nothing but blank spots, and maybe three sides that make a picture when they're together, and those are easy. And then some don't have blank spots at all, and every cube has to be showing a different side, and those can be pretty tricky.

These are more addictive than heroin for the first couple days that you have one. I actually lost sleep solving all the cards on the race track Zen Bender, and then happily went plowing through the rest of them. Of course, I have kind of a compulsive personality when it comes to puzzles - being a young nerd meant I had more puzzle books than friends - and if you're not as fascinated by a good puzzle, you may think I'm insane for not being able to put these down.

But if you do love a fun puzzle, you should pick up a Zen Bender or two. If you're a hardcore and want to sweat a little, the race track Zen Bender is the toughest of the batch. If you're a candy-ass when it comes to puzzles, start with the wiener dog. You can give them to your kids for long car rides, and then maybe they'll go half an hour without trying to stick writing implements in each other's ears.

Ultimately, you'll probably burn out on the little puzzles. If I had one suggestion for Zen Benders, it would be to make them harder. By the time I was finishing the really hard puzzles on the race track, I had figured out the pattern and could solve any puzzle, easy or hard, in about a minute. It wouldn't be hard to ratchet up the difficulty - just make more diverse cubes, which would let you make more interesting pictures, and make you work a little more trying to put them together.

But then, you can get one of these wonderful little puzzles for like eight bucks, depending on where you shop, so if you do get tired of one after four or five hours, it's still cheaper than a prostitute, and lasts longer, too. And to get even more mileage out of your Zen Benders, Out of the Box has free downloads for more challenge cards, and if you're really looking to stretch that eight dollar investment, it's not hard to make your own challenges.

Pick one up, is all I'm saying, and see if you can even put it down before it's time for dinner.

Cons:
Gets easy too fast
Not enough diversity

If you like clever little puzzles, you should get some Zen Benders:
http://www.funagain.com/control/category/~category_id=SERIES_10307
Posted by Matt Drake at 3:20 PM

I am all about puzzles, and this sounds interesting, it sounds like a good one to figure out and then pass on to a friend and tell him you figured it out in 20 minutes when it took a hour or 2.