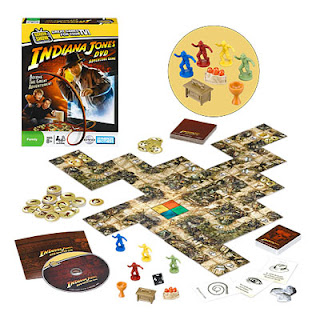 My office is getting crowded with review copies. I think it goes without saying that I play everything before I review it, but in case you think I make this stuff up, I promise that my opinions are based on actually playing the games I write about (except for Monster Quest - I never did finish that one. I just couldn't get through a whole game without wanting to puncture my larynx).

The problem is, it can sometimes be tough to find people who want to play these games. Like AT-43 - I've got it, and I've read the rules, and I really want to play, but my son is the only one who will play with me and he hasn't been passing all his classes for a long time, so he's a little bit grounded. Or Ca$h N Gun$: Yakuza, which I want to play so bad I can taste it, but it needs at least six people and there are only four in my family. I'll get opponents sooner or later - probably sooner once school gets out - but right now, if I put an Indiana Jones game on the table, I can get players. So you get to read about the Indiana Jones DVD game, because my family will play it with me.

In fact, I think that's the main selling point of the Indiana Jones games - people will play them. They're not particularly inspired, I haven't seen much in the way of interesting game design, but they'll still outsell Twilight Imperium by like three trillion copies because they have Harrison Ford on the cover wearing a leather jacket and a fedora. Suburbanite yuppies who think they're living on the edge when their sofa doesn't match the TV cabinet are more likely to enjoy these games than your average basement-dwelling game nerd.

So the question for the erstwhile game reviewer becomes, is the game any fun? And the answer should be pretty obvious - if you're a hobby gamer, this is not your bag. Indiana Jones Life was more fun than I thought it would be, but it's still not Risk 2210. You're not going to schedule a game night with your other gamer buddies and break out the Indiana Jones DVD Game. These are not hobby games, and honestly, they're not supposed to be. They're mass-market games for families or friends who like Indiana Jones, and that's about it. June Cleaver might pick this up for Ward and the Beav... but of course, she couldn't play it, because the Cleavers didn't own a DVD player.

In the DVD Game, there is actually a little bit of game here. In fact, I've won every game I played because I played better than my family members. It's not a random dice-fest like Life or a complete crap shoot like Akator Temple. There are room tiles that contain fights, traps and secret doors, and you move around the board exploring an ancient temple, searching for the relics from the first three Indy movies. Whenever you hit one of the special spaces, you choose an icon from the DVD and get a special challenge.

The relic challenges are very interesting. Like if you're after the Holy Grail, you have to pass three challenges, just like Indiana Jones did in Last Crusade. If you're trying to get the Ark of the Covenant, you have to navigate a room full of asps (very dangerous - you go first). And if you're looking for the Shankara Stones, you'll find yourself careening through caverns in a mine cart. These are actually the most interesting parts of the game. It would have been fascinating to survive a nuclear explosion inside a refrigerator, but that may have stretched credibility just a bit.

The downside to the challenges is the movie clips. It seems odd to complain about having to sit through movie clips in a DVD game, especially when they're clips from some of my favorite movies, but by the seventh time you have to watch Indiana Jones say, 'why did it have to be snakes', it gets old. The single greatest failing of this game is the inability to skip the movie scenes and just play the challenge already. The second greatest failing is the voice acting - it's supposed to be Salah, but it sounds like Chuck Norris pretending to be Hugh Grant.

Once all the relics have been collected, the temple starts to collapse. You all take turns trying to get out of the temple, and every so often the DVD will tell you to remove a bunch of tiles. If you're standing on a tile that disappears, or if your path back home is cut off, you get buried alive. You can still count up your score, but everyone who survives is going to get a lot more points than you are, which can make it real tough to win the game if you wind up under a pile of rubble, even if you are carrying the Holy Grail.

I can think of a few groups of people who might really dig this game. If you're looking for a game the whole family will play with you, this might be a big winner. If you have friends who stumble over the Monopoly rules but still want to play games, they'll be able to wrap their heads around this one and have fun. It's also a good gift for your friends who wear sweaters around their necks and play doubles tennis. I'm not putting it in my top 50, but it's one that I'll probably play again.

Great fun for casual gamers, worthless for hobbyists, you can get your copy here:
http://www.hasbro.com/default.cfm?page=ps_results&product_id=21913
Posted by Matt Drake at 2:44 PM