Board Game Review - Return of the Heroes 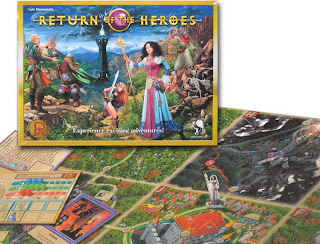 It's hard to find good heroes any more. Why, in my day, we had to kill dragons with fireplace pokers and then carry the damsels off on our backs while we ran away from black knights. These kids today - they don't know how good they have it.

Take these pansies in Return of the Heroes. Sure, it's a German game, but still, they could show a little backbone. They just wander around the countryside, getting stupid missions like 'visit another hero's house' or 'buy a staff and take it to the boat' or 'take this little girl to the potty.' Makes me sick! I remember having to kill fifty giants with just a jock strap and a rubber flotation device.

And every hero gets a heroic quest. Bah! Their heroic quests are for sissy boys! One hero has to buy candles, for crying out loud! Another one has to feed honey to a bear! Not like when I was a young hero - we had to wade hip-deep through the Swamp of Endless Despair, fight the Black Demon of Doom, and then steal the virginity from a dozen white priestesses, all before the sun went down!

But then, our quests had some rewards. Why, after I rescued the princess from the steam-belching, dog-faced lizard-eater, the king gave me half the kingdom and a week stay at his private harem in Dubai. But what do these pathetic heroes get if they can escort Bambi to his home in the glade? Wood cubes and a gold coin! And if they finish their heroic quests, they get a precious stone. Precious stone, my ass - I've passed bigger kidney stones than what these candy-ass kids get for finding Juan's Relic or the Signet Ring.

Those wood cubes get these whippersnapper heroes a little experience, but if you want some real experience, try storming the frozen mountain wearing a loincloth and a Kermit the Frog mask. We had to do that! Uphill, in the snow, both ways! Now that's how you toughen a man up! Wooden cubes! Ha! In my day, we wiped our asses with wood cubes! The more splinters, the better!

The problem is, giving these upstart heroes everything easy doesn't do them any favors. Why, I had to endure the endless doorbell rings of the geriatric mailman for three days, and if these punks think they can handle that, well, let me tell you, beating up a big frog just doesn't prepare you for the real bad guys.

I mean, just because the heroes are panty-waisted girly-men, doesn't mean the bad guys get any nicer. That nameless villain who darkens the whole country isn't going to sit in his castle and send these damned kids love letters. No, as soon as one of them gets one of those silly precious stones, he starts sending out servants, all over the place, so that after a while, you can't piss up a tree without hitting a blood-thirsty assassin. And let me tell you, a piss-soaked assassin is not going to be very happy.

I weep for the fate of the world when these fancy-pants heroes, whose exploits till now have been delivering boots and killing bees, have to face that nameless villain. Sure, their precious stones let them face off against one of the guardians of the dark castle, but all that prancing about punching wolves and delivering gold bowling balls doesn't mean you're ready to deal with a real bad guy. They'll need real gear, man's gear, the kind we had when we were heroes. Why, I had a sword so big, I could put up a sail and use it for a boat!

And so what if they get past the guard? That bad guy isn't going to kill himself, you know. These heroes aren't even going to know what they're fighting until they get there, and it could be anyone - the black knight, the warlock, the six-armed goddess - and you better believe those bruisers are ready to scrap. Sure, in my day, we scraped the mud off our boots on guys like the deep one, but these punk kids aren't going to learn how to kill a demon by selling candy to girl scouts.

Bah. In my day, we fought the villains with spatulas and rubber dog crap, and then we screwed all the nuns and rode off on the gold thrones. That's the way it was, and that's the way we liked it!

I thoroughly enjoy playing Return of the Heroes, even if I do wind up with the quest where I have to kill the giant frog to steal his golden volleyball. Sadly, the game is really hard to find. This is the only place I could find online to buy a copy:
http://www.boardgamer.dk/produkt.php?id=567&tm=
Posted by Matt Drake at 9:52 PM

When first made aware of this game I sought high and low here in Australia to no avail. It became an ongoing quest that I thought would never find fulfillment. The one day there IT was...and it's partner the Shadow Dragon expansion! Sure, they both had smashed boxes...but the contents were pristine, and with kids I have never sweated box corners. So Grail found. Now, for some odd reason, it is in every store I walk into! I feel like I am in some board game version of Fallout 2 ;)

Glad you enjoy it though...a quiet fav of mine.

On Amazon.de you can find the original game and two different expansions. It'a all in german, thought, and tou find it with the keyword 'helden'. Price: a little more than 20 euro for the original and around 11,00 and 17,00 for the expansions.

Just to funny, I really figured you hated the game till the very end. I love all the jokes though.

Fancy-Pants ( I am a big Chris Elliot Fan, and Letterman of old ).

I would hate to be a hero in a game you made!