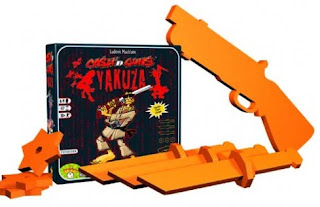 The heist had gone better than anyone had hoped. Tino and Igor had cased the joint, the Yakuza had neutralized the guards, and Mr. Black and Huggy had helped them all get away clean. But it all went to hell when they got back to the safe house, and now Mr. Black found himself staring down not just one, but two steel swords, while his partner Huggy held a gun on Tino, who was trying to cover half the room with his sawed-off shotgun.

Black chickened out and take cover. He dropped under the table just as all hell broke loose. The two sword-swinging dames ended up stabbing each other, Huggy put a bullet in Tino and Igor shot Huggy right in the leg. The bodies hit the floor around Black, and the two thugs still standing started divvying up the pile of loot that was scattered all over the table, still warily covering each other with throwing star and automatic.

If you've played Ca$h N Gun$, that scene might be a little familiar. All we're missing is the Mexican bandito and the martini-swilling Asian chick. But then, Ca$h N Gun$ never had swords before, and there's no way you trusted anyone enough to have partners before now.

Yakuza changes all that. What was a hilariously awesome but randomly chaotic party game is transformed into the ultimate gun-toting, bullet-slinging, loot-grabbing bonanza. If you can put together at least six people (and up to nine!), you can't have a lot more fun than you will playing Ca$h N Gun$: Yakuza. In fact, if you announce that you'll be playing Yakuza at your party, that might be a better draw than free beer. Unless your friends are drunks, in which case you should tell them there's free beer and Yakuza. Your friends will swarm your house like ants on a picnic.

Now, don't bother buying Yakuza by itself. It's an expansion, and you have to have the original, or all you've got is a box of cards and foam weapons. While that is exceptionally cool, there's not a whole lot you can do with that. But add those foam swords, shuriken and a shotgun to the six foam pistols and pile of ill-gotten gain from the original Ca$h N Gun$, and now you've got a game that will make people remember your party when they're old enough to need prune juice and a colostomy bag.

When you play Yakuza, you're no longer on your own. Now you've got at least one partner, and if you have enough players, you have two. You set up ahead of time and work out signals for who to shoot, and whether to use blanks, and if you're planning on dropping out. You'll casually switch your gun to your right, throw a subtle finger sign to your partner, and on three, both of you prepare to gun down an enemy at the same time. It works great, and this game has never been more fun.

And the contents of the new box make the game absolutely hilarious. Yakuza don't have guns - there's just no class in noisy pistols. Instead, they tote swords, but now they can only threaten people sitting next to them. But they also each get a shuriken, which they can use to wound anyone at the table, even changing their mind after they see who drops out. And the original cast of goofy gangsters isn't left out in the cold, because now you get a double-barreled sawed-off shotgun, which only the old-school thugs can tote, but which can menace two guys at the same time.

The body count tends to be a lot higher in Yakuza. And if you like games where you shoot people and take their stuff, a game where you kill five of your closest friends should be a pretty obvious choice. It takes about a half hour to finish a game, but that'll be half an hour you'll enjoy more than you would if you were sitting around swapping coal for sheep or invading Urkutsk.

Every now and then, I really rave about how much I like a game. It happens enough, however, that I fear I may have diluted the effect when I tell you that you should get up, right now, and go get a copy of Yakuza. And if you don't have the original Ca$h N Gun$, you'll need that, too. I can't think of a game that's more chaotic fun than Ca$h N Gun$: Yakuza, and if I had some way to spend your money for you, I would have the game coming to your house (or apartment, or basement) right now.

Seriously. Get this game.

Pros:
Takes an awesome game and turns it up to 11
Foam swords, foam shuriken, and a foam shotgun
Partners!
Adds a lot of strategy to Ca$h N Gun$
Makes my favorite party game into an even better party game

Cons:
There are no cons, and if someone tells you there are, you should stick a foam pistol in their belly and 'persuade' them otherwise

If you don't buy a copy of Ca$h N Gun$: Yakuza, scary Japanese mobsters will come to your house and stab you with foam weapons. Save yourself. Go here and get a copy: http://www.asmodee-us.com/games/party-games/yakuza-cash-n-guns-expansion.php
Posted by Matt Drake at 6:10 PM

Thanks for spending my money, Matt!! I've been on the fence for a while about this game but I just picked up both the base game and this expansion after reading your review.