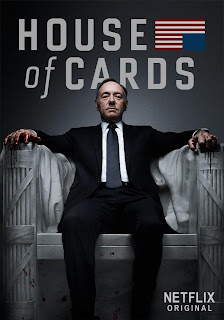 I am not a fan of political drama. For me, The West Wing was about as interesting as a show about a bunch of attractive doctors who work in the same hospital and have sex all the time, which is to say, not interesting at all. The actual inner workings of my nation's capital bore me to tears. I just don't care. Yeah, pass a bill. Vote. Eat at the cafeteria and go to fundraisers. Whoop-de-friggin-doo.

But then, House of Cards is not a normal political show. It could have been placed in the Roman senate, or the French royal court, or an Italian city-state. It's Machiavellian, a study of corruption and power and greed, where we get to watch an amoral sociopath scheme his way to the top. Kevin Spacey plays Congressman Frank Underwood, but he could have been a Chinese magnate making a bid for the emperor's seat (though he would have needed some pretty serious makeup to be convincing at it). Or, I don't know, a Danish prince.

The premise starts off big - Frank Underwood has just helped a dude become president in exchange for a promise of being elected Secretary of State, but once the guy gets the big chair and the round office, he changes his mind and screws Frank out of his dream job.

Some people might get pissed. Some people might rant and scream and plot revenge. But not Frank Underwood, because he's too big a man for petty vengeance. Instead, he decides that he was thinking too small, and he'll take all the power for himself and screw the ungrateful bastards who hosed him along the way.

And then he kicks ass.

As you start to watch House of Cards, you'll be delighted at the completely detached way in which Frank Underwood and his wife Claire destroy all opposition. They rescue people just to use them as pawns. They destroy lives as casually as you might eat a bagel (unless you don't like bagels, in which case it's as casually as you eat something you eat very casually). They plot every step, improvise as needed, and shirk from no unsavory task if it furthers their goals. And ironically, as they carefully destroy anyone who gets in their way, they totally love each other.

Which does not keep them from getting a little nookie on the side. Both of the Underwoods have affairs, but in this demented couple, they come home and tell each other about it. They explain how they're using the people they're banging. They'll stop if the other person asks - but the other person never really has a problem with it, since both Claire and Frank know it's all about the power play.

I'm hoping that, so far, I've made House of Cards sound irresistibly entertaining. Because I loved it... until about the middle of the show.

I guess they just couldn't keep up the killer scripting through the whole show, and decided they needed to add something weird, just to compete with HBO. As you get toward the two-thirds mark of the show, the sex gets awkward and a little uncomfortable. I get that they're trying to be edgy, but I think completely destroying an innocent man because he had the misfortune to get between you and your goal is edgy enough. We didn't need the messed-up sexual trysts.

By the end of the show, House of Cards gets back on track. The weird sex stuff mostly comes to an end, a few things get sorted, and then you're left with kind of a bad taste in your mouth. But the show goes on, only it seems like they might have run out of steam. The endgame is painfully predictable. Frankly, the end does not live up to the promise of the beginning.

However, House of Cards is still very much worth watching. If the only reason you watch is to see Kevin Spacey break the fourth wall and have entire monologues directly into the camera, it's time well spent. Robin Wright is a long way from the Princess Bride, but she is fantastic as the evil ice queen. There's a girl photographer on the show who has all the acting range of that bland chick from the Twilight movies, but most of the other actors more than make up for her uninspired monotone.

All things considered, House of Cards is definitely worth watching, even if there was a lot of unexplored potential. The dialog is great, even if the plotting is spotty, and Kevin Spacey will light your TV on fire. Best of all, you can get the entire season on Netflix and watch it all at one time. Downside? It's ONLY on Netflix. But what the hell, get it for a month and then cancel. It's worth it.
Posted by Matt Drake at 7:53 PM

Just FYI, there is a (previous planned from the beginning) second season.

I agree with you--there was some bland weirdness in the middle, but it didn't bother me too much. I just found that the two or three romantic subplots were extraordinarily poorly executed. None of them really advanced the story and I didn't care about any of them. Thankfully, it's not a HUGE part of the storyline.

My biggest issue was that there are about three completely ridiculous political scenarios that occur. I don't want to spoil anything, but a lot of stuff just doesn't add up and would never happen, even with Frank's underhanded shadiness.

Still, in the end, it's a wonderful series. If you already have Netflix it's certainly worth watching.

Yes, I am looking forward to the second series, but there's plenty of stuff in the show where I just went, 'I, uh, don't think it works that way.'

It's worth watching. But I kind of ended up wishing it were taking place in an Italian city-state. For one thing, we could have had more dead bodies.