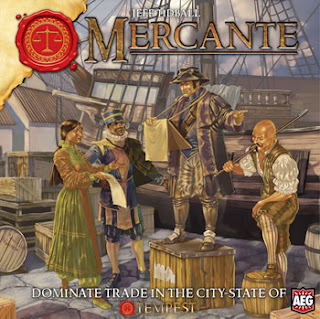 Mercante is the second in the Tempest series of games, or the third if you count Love Letter, which apparently the publishers do not, because there's a big '2' on the side of the box. It furthers the story of the evolution of the city-state of Tempest. In the first game, Courtiers, players ponce about and plot to exert subtle influence over the city by gaining the king's ear - and then someone succeeds and the queen gets arrested for treason. In Mercante, the merchants rise up and decide it's about time someone listened to them. Money brings power, I guess, and so you're all trying to elevate your positions by getting rich and powerful.

It might seem like Mercante should be very similar to Courtiers, since they're part of a series, and there are certainly similarities. The art, for one thing, is obviously created by the same artists who made the first game. The setting is the same, except for the obvious difference of the imprisoned queen. But the differences are much larger - and more important - than the things that are the same.

For instance, instead of limited cube placement and cautious card play, you've got bidding wars and limited actions. The game feels very much like it belongs in the trilogy without being the same game with a new varnish. You'll bid on goods to store in your warehouse, try to sell goods to make money, and fill delivery contracts for certain items, like pigs and jewelry. Hopefully not at the same time, but there were some twisted people in Tempest. Some of them might have been into that. You're not here to judge.

You are here to get rich and powerful, though, and while there are several ways to get power, the more effective way is to just go out and buy it. At least, if you're merchants. If you're politicians in modern America, the best way to get power is to lie to a bunch of people and promise other people favors if they'll fund your reelection campaigns. But this isn't a game about American politics, it's a game about the rising merchant class, so in this case, money means power.

Mercante is as brilliant and involved a game as Courtier. The rules might take a couple read-throughs, just to make sure you got them all, and I'm pretty sure we still played wrong. But these meaty rules provide you with a game that is as strategic as it is tactical, smart and tricky, and full of great opportunities to screw your friends.

In fact, that friend-screwage is one of the highlights of the game. So much of Mercante is about bidding, and you can totally hose someone just by bidding them up and forcing them to pay more than their win is worth. You can hire thugs to rob their warehouses. You can close markets just as they go to sell their goods. Over and over, there are excellent chances to make other people miserable, which make Mercante good, clean fun best enjoyed by people who don't take it personally when you treat them very poorly.

I really hope these Tempest game kick off a trend. This idea of connecting games in a series, telling a story through the games, is so much fun I can barely stand it. It's like you get to be there to witness the city-state changing before your eyes. These are not expansions. They're more like sequels. They're similar, but not identical, and each game can stand on its own - but seriously, if you're going to get one, get them all. They are fantastic.

Like all the games in the Tempest series, Mercante is involved, very European, and low on dead bodies. But it's marvelously fun, if you're into this sort of game, and shows just how much innovation the board game industry can come up with. I highly recommend it. And in two days, I'll tell you about Dominare, the best of the bunch.

Pros:
Involved and smart
Tons of interaction
Heavy without being dull
Tense and hellacious fun

Cons:
Very Euro (not a con for me, more of a heads-up)

You can get Mercante from Coolstuff, Inc., and I am flabbergasted that you can get it for a price this amazing:
http://www.coolstuffinc.com/p/165353
Posted by Matt Drake at 8:36 PM