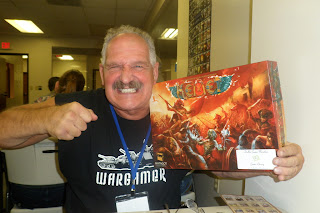 The first time I met Greg Duff, he left a hell of an impression. He was large as life and twice as dopey. He was six foot plus and full of muscle, wearing a Hawaiian shirt open to his belly so you could see his shoe-leather skin and curly white chest hair. Fifty-some-odd years old then, his hair was all gone gray, and he had the most ridiculous inch-long ducktail in the back of his hair. He looked like he thought he was an older version of Magnum PI. And he loved playing games.

Lots of gamers go through life a little smaller than other people. We participate, but we're not as willing to be noticed. We know we're the fringe, and for many of us, that makes us wary. But not Duff.

Duff was loud to the point of being obnoxious. He had the manners of an ox, and I don't know how many times I had to wipe up food that had flown out of his mouth when he started laughing after rolling particularly well - or particularly poorly. He never noticed, of course. He was busy laughing and being obnoxious.

I've never known anyone who got as much out of playing a game as my friend Duff. He was all in, all the time. I played games with Duff two days before he died, and even as the pulmonary fibrosis that finally kicked his ass was sucking all the oxygen out of his lungs, he was living and dying on every die roll. We kept having to take breaks so he could check his oxygen levels, because he was so excited about every naval battle that he kept hyperventilating. We're lucky he didn't die right there, come to think of it.

Another funny thing about Duff was the crazy shit he used to say. He never introduced himself as Greg. It was always Duff. He insisted on it. And that was good, because he also referred to himself in the third person a lot. If you came at him, he would stomp a mudhole in you, and tell you that you asked for it because you came to see The Duff. That saying - 'came to see The Duff' - is going to have to be retired now. It just doesn't work with anyone else.

Duff was tougher than a bag full of nails in a steel box, but he also had a heart that was too big for his own good. I don't remember how many times he would leave our game days early to go build a chicken coop for his ex-wife, or drive his grown daughters to the mall so they didn't have to use their own gas. He looked out for the people he loved, and since his compassion was married to a lack of common sense, he pretty much loved everybody.

You could see how big Duff's heart was when you considered what he did for a living. Duff worked at a high school, teaching mentally disabled kids. That's not a job I would do in a million years, because I don't have enough compassion for it. But Duff never quit giving whatever he had to help whoever needed it, and if there was a job that summed up Duff, it was looking after those often-ungrateful, routinely violent, troubled kids. He could take one down if he had to - he did it more than once - but they were never hurt in the process. Duff, on the other hand, was always getting bruised and beat up.

But he never let up. Duff was a bad-ass son of a bitch. Two days before he died, he was still talking about all the stuff he was going to do to keep fighting. He had me check out the sign he had made, the one that said he and God were going to put the kibosh on his disease. His room was decorated with posters of Patton and John Wayne and the Terminator, because if there was a ever a man who was over the top about being a man, it was my friend Duff.

Last night Duff just expired in his sleep. He went to bed and never woke up. If I had to pick how Duff went out, that's the second way I would have picked. The first way was never practical - he should have gone out swinging a giant axe, yelling battle cries at the top of his lungs, the blood of his enemies spattering his beard (he didn't have a beard, but he should have). He would have killed a mountain of lesser men before he went down, and if there was a hot woman to impress in the process, he would have killed another dozen, just to show off.

I'm going to miss the shit out of Duff. I loved that goofy bastard. He was inappropriate and ill-mannered, but I've never known anyone like him, and I doubt I ever will again. He had a tough life, but he never backed down and he never gave up. He was a giant of a man, body and soul, and now that I think back on it, I cherish every stupid minute I ever spent with that giant jackass.

Somewhere in Valhalla, Duff is arm-wrestling some Viking asshole out of his beer, running off with the women, and playfully daring some douchebag warrior to try and beat him at some ridiculous contest. And that warrior is going to get his ass kicked.

Because he came to see The Duff.

Never saw anyone who could roll dice like that guy.

One of a kind, he will be missed.

Obviously I never knew him. Now I sure wish I had - he sounded like a helluvah guy.

A great tribute to a Lion in Winter. He deserved better in life, so I'm thinking it will more than even out for him in his hereafter.

Thank you Matt, you've summed up what I wanted to say, but was too torn apart to come up with. I will miss Duff like the brother I never had...

He certainly made my time in Fort Worth better than it would have been without him. I thank him for introducing me to a wonderful group of people in Arlington as well.

What a heartfelt post about my dad. He was a great and loving man. I can't believe he is gone. Thanks Matt for writing this. I've only seen you a few times when I was working at AAFES but I know what a great friend you were and that you played games with my dad a lot. Bless you, sir.
~Rebecca Duff

Of course, Becky. It was an honor to know him well enough to write about him. Please let us know about the final arrangements - I really want to attend his funeral. And his wake, if he has one.

Thanks for sharing this wonderful tribute. I would have enjoyed meeting him. God's peace to him, and my condolences to you.

This was a great bit of writing on behalf of your friend. I never knew the Duff but reading your description of his mingled essence of boisterous absurdity and heart warming goodness really tinged my morning with sadness at his passing. My condolences to his family.

I can't say I frequent this website, but that was a great eulogy, and summed up the Duff to a tee. I actually took that photo of Duff less than three months ago at DGM before we sat down to play his newest favorite game - Kemet. It was a hell of a game, full of combat - just the way Duff liked it.

This is an excellent tribute to a great man.
Thank you, Matt.

I got to play C&C:N vs. Duff at a tournament in Austin. He was a breath of fresh air and a hell of a lot of fun to play against. He kept referring to his units as his "boys" which I found hilarious and oddly touching.

I was disappointed when he didn't show up again, and saddened when I saw this post. It was an honor and a pleasure, Duff.

Matt and everyone else, we are having a memorial gaming party potluck this Sunday at DGM starting at 3 pm until the last gamer leaves. It would be super cool if Matt is able to come and read that blog post. I am also preparing a speech to sum up my dad's feelings about how much he loved everyone and had such a blast at DGM.