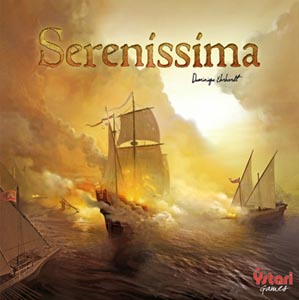 You won't hear it when you read this review, but just know that having to repeatedly type 'Serenissima' is going to get so old that I will be using profanity several times. Not about the game - that's actually pretty cool. Just about having to type Serenissima a bunch. There went a cuss word right there.

Serenissima is a sort-of reprint from the mid-90s that has players taking on the roles of medieval traders in the Mediterranean (that also gets some adult-themed language, just for being so damned hard to spell right the first time). Hell, it might be an identical game to the original, but I wouldn't know because I just found out it was a reprint about half an hour ago.

So you'll take your boats (which are actual, tiny plastic boats) and fill them up with sailors (who are actual, tiny pieces of wood) and then sail around to pick up cargo (which are also tiny pieces of wood) and sell it places. Sometimes you will get money for delivering the cargo. Sometimes you will stimulate your local economy. And sometimes someone will come up and sink you and send all your cargo to the bottom of the sea. This last one actually happens a lot more than you might like. But since you can do it back to them, it's actually pretty sweet.

At face value, Serenissima doesn't have lots of complicated rules. Every boat can do one thing during a turn, and a boat with more people can sail farther and fight better because then you can let one crew take a nap while the other is working. And your one thing isn't all that impressive, either - you can pick up cargo, sell cargo, fight or invest.

And yet there are an incredible number of decisions to make as you play. Should you get that close to the rival ships? Should you build now and spend all your money, or save some so you can buy some stuff later? Build a fort or build a church? Istanbul or Constantinople (son of a bitch, that's hard to type fast)? Never mind, in this game, it's Constantinople. Apparently the Ottomans haven't stolen it yet.

A lovely feature of Serenissima is how much interaction you will have as you play. The more players you have, the faster you will run out of resources and have nothing left to do but steal stuff from the other players and blow them out of the water (not literally - they had to use bows and arrows and swords. They didn't have missiles). But fighting isn't the only way to mess with your friends. You can buy up all the boats so they can't get any. You can steal the last chunk of stone that they needed to build a fort. You can blockade them and keep them from dropping off their goods.

I was really surprised as I played Serenissima at how much fun I was having. This is not a dead-sexy game - the board is short on color, the boats are nifty in function but bland in form, and there are a whole damned bunch of wooden cubes.  And THAT surprised me because it's being distributed in the United States by Asmodee, and I don't know that I've ever seen them make an unattractive game before now.

But bland or not, Serenissima (you have no idea how many times I had to hit backspace to get that word all the way out) is very fun. When we played, there was hollering. Battles went south, deals were struck, allies were betrayed. It was pretty awesome. And this was all in a game about doing business! No wonder I like gangster movies so much - they're just doing business, but that often entails outright homicide. Like this game.

Whose title I am not going to type again.

Pros:
Cool plastic boats that you fill up with sailors and cargo
An excellent balance of trade and warfare
Requires careful timing and long-term strategy

Cons:
A little on the bland side, visually

You can get Serenissima (dammit!) for a ridiculously low price at Coolstuff:
http://www.coolstuffinc.com/p/165369
Posted by Matt Drake at 5:40 PM

The original version, first Euro I ever played, was NOT bland visually. Sounds like they went from one extreme to the other.