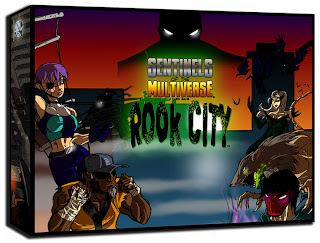 The streets of Rook City were overrun by mutant vermin, spreading disease and infection, and the mighty Legacy was reeling from the poison coursing through his veins. Mister Fixer, the kung-fu handyman, was getting tired of having Legacy mistake him for a punching bag, and the Expatriette was about to stop firing at the vile Plague Rat and start in on Legacy. The Wraith, for her part, was just irritated that she couldn't find her utility belt, and had to spend half the fight hiding in the shadows while she tried to remember where she left it.

Plague Rat, of course, was delighted. He wasn't having much luck infecting the other heroes, but they were so distracted that they weren't beating on the rat-man, leaving him free to do all manner of crimes. That worked right up until Expatriette found a cure for Legacy and got him clean, because then Legacy galvanized the whole team into a coordinated attack that landed the disgusting supervillain into a maximum security prison for gross monsters.

That was the story of our first adventure in Rook City. It wasn't our last, and we'll revisit the crime-ridden town again, because man, that was fun. However, Rook City also illuminated a problem with Greater Than Games - they seem to have trouble getting it right the first time.

The initial release of Sentinels of the Multiverse was amazing. It was an amazing, cooperative superhero game that seemed to be thoroughly enjoyed by nearly anyone who played it, but it also had some serious problems. The box let all the cards slide all over the place. You had to have a calculator and notepad handy the whole time. It was incredibly hard to remember bonuses and penalties.

But the re-released, second version fixed all those problems, and even rolled in some new improvements. The game was tight and fast and so much better. It's easily my favorite superhero game, and the only one that really feels like I'm playing out a couple issues of an actual comic book.

A game this awesome needs expansions, and Rook City fits that bill. Two new heroes, four new villains and a couple new playgrounds in which to stage your beatdowns make Rook City a robust and welcome expansion to a really great game.

But it ain't perfect.

The new heroes really are quite excellent. They're not too complicated, but not overly simplified. Expatriette is a sort of Punisher clone, loaded up with heavy-duty firearms and a low tolerance for bad guys in general. Mister Fixer is almost more of a pulp hero, combining mystical kung-fu with a toolbox full of pipe wrenches and crowbars. I love the art on these two new ass-kickers, and have no complaints about the new heroes at all. In fact, I think Mister Fixer is my new favorite to play, and my wife loves Expatriette.

The villains are also pretty great, but here we do run into some problems. Plague Rat is basically a fun guy to beat down, and he's fairly straightforward, but he does require you to remember a lot more than you might be used to doing so far. His abilities key off the infections he's handing out to heroes like a pedophile with a bag of lollipops, and so you'll be constantly having to check around the table to see if there's something that should be affecting something else. All things considered, he's a fun villain to fight, and you can get around the downsides and still have a good time.

The Organization is a different matter entirely. There's the Chairman, the criminal kingpin you have to beat to win the game, and his assassin the Operative, who you have to defeat if you want to throw a beating on the Chairman. Their deck is chock-full of underbosses and minions who will pop out and harass you to no end - at one point, we had ten minions in play at the same time, plus two giant mutated rats and a vat full of toxic chemicals. This is supposed to be a tough villain to beat, so we're OK so far - until we started having questions.

Does an end-of-turn effect trigger if the card appears at the end of the turn?

What do you do when the villain runs out of cards?

How on earth do you beat a guy who summons a chain of six cards at the same time?

We had more. And all those questions are answered quite nicely in an FAQ I found at BGG… which is 32 pages long.

When your game needs an FAQ that is 32 pages long, you may have done something wrong. That, or you're Fantasy Flight Games. Sentinels of the Multiverse is a straightforward game. It should not cause so much confusion.

We did manage to beat the Chairman, but I'm pretty sure we only won because we played completely wrong. I was fine with getting my ass kicked, but it was unpleasant to be so completely bewildered by so many card effects. And I'll tell you right now, it's tough to track end-of-turn effects from ten different cards.

We haven't played with the other two villains yet. Before we do, I plan to memorize the FAQ. But that means the next thing to discuss is the new environments.

The two new arenas for staging your fights are the streets of Rook City and the chemical plant (which is in Rook City). Unfortunately, we used the streets for Plague Rat and the factory for the Chairman, and that was backwards. Unlike previous environments, which could feasibly work with just about any bad guy, these environments really make more sense when paired with the correct villain. The factory, for instance, spawns diseased rats - which goes pretty well with a giant rat villain. It did not make sense, on the other hand, for this factory to be overrun with crooked cops, informants and hired guns. Thematically, the environments are great - but you have to pair them up properly for best effect. You didn't have to do that with any of the original locations, and so I was a little disappointed in the new spots.

I want to make sure to emphasize that I still really enjoy playing Rook City, and I'll get back there to take on the last two villains. I have complaints, sure, but this is still an excellent expansion to an excellent game. I would even guess that if they reprint it after a little fixing, it will be even better. The chemical plant and the city streets make outstanding environments, even if they do tend to disrupt the theme if you mix and match them wrong. Sentinels of the Multiverse is still the best superhero game I've ever played, and if you like this box of bad-ass dynamite, it's worth picking up Rook City.

Just go read that FAQ before you play.

Pros:
New heroes, villains and environments - and they're all cool
Adding new stuff gives you more reasons to play again

Rook City is worth your money. If you like Sentinels of the Multiverse, get over to Greater Than Games and get one:
http://greaterthangames.com/store/sentinels-multiverse-rook-city
Posted by Matt Drake at 7:58 PM

Sentinels is a great game, but does have a lot to keep track of. Some of the combinations of heroes, villain and environment are not that fun, some are impossible and others are just plain easy.

There are also a few heroes that aren't terribly fun to play (Legacy and Nightmist, I'm looking at you), but all in all with the right folks this game is a blast.

My only complain at this point is the enhanced version box. Why oh why wasn't it made wide enough to fit sleeved cards?!

Oh, man, you are so right about that box. I kind of wish these guys had just taken their game to an established publisher. I love Sentinels - it's my favorite supers game - but they keep making rookie mistakes that a big company would have avoided.

One other thing - I love playing Legacy. He's an outstanding support character. But if you wanted to punch things, he does kind of suck.