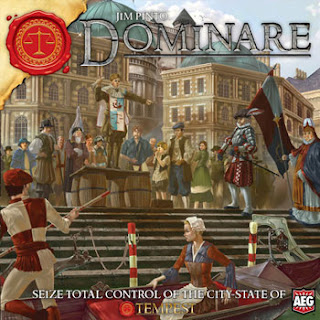 I know this is starting to sound like a broken record, but I really love the idea behind the Tempest games, where you unravel a story that is told through a series of games. Each game is a completely different, stand-alone game, and each recreates one period of struggle in the history of the fictional city-state of Tempest. The last game in the series, and the best of the batch, is Dominare.

In Courtier, players compete to sway the king's ear. Then the queen is arrested for treason, and so in Mercante, the merchants rise up to grab some power. But the whole time they've been manipulated by the people behind the curtains, the people who will eventually control all of the city and run their own shadow governments, and then they will set up security stations where minimum-wage losers will grope your privates before you can get on a plane. You play the shadow government. Though you would probably have sense enough to disband the TSA.

Dominare has a similar feel to its two predecessors, being a very involved and Euro-style game with limited actions, some cube-placing, and gallons of fantastic art (I went to art school, so I can verify that art is typically measured in ounces, so gallons of fantastic art is lots of great art. Hyperbole, on the other hand, is usually measured in yards). Many of the elements that make Courtier and Mercante enjoyable are found in Dominare, including cutthroat interaction, careful planning, and special actions.

However, Dominare ratchets up the intensity to an incredible degree. Every time I've played, the game comes down to the last turn, the last few actions, and one person grasps their way to the top while the rest are trampled pitilessly. The competition is fiercer than in either of the other games, and every play is memorable. In fact, you'll be fighting tooth and nail for just one more spot, just one more plot, one more Lay's potato chip (nobody can eat just one).

You know how most games have multiple phases, but the game is really all about one part, and the rest is just maintenance? That's not Dominare. In Dominare, you first have to add an agent to your conspiracy, and this part is absolutely critical. Choose well, and you'll have an edge. Screw it up, and you're going to regret it.

Then you get paid and distribute your influence throughout the city. This part is ALSO absolutely critical. Grab a majority of one important district, or whittle away at an opponent's power base. Spread yourself out, to have plenty of options, or swoop in and establish yourself as the undisputed master of a particular neighborhood. Control the senate to make your districts more valuable, or control the church to send missionaries out and establish your domain throughout the city. Or run the canals, and control everything for as long as you can afford it.

Then you have actions, where you send your agents into the city to sway minds and hearts (and in one case, genitals - that's right, there's a hooker in this game). Disable opposing agents by tying them up in meetings. Or remove them altogether by sending your knife-wielding assassin out to hose down your foes. Steal money. Build your power base. These agents can do awesome things - but you can't use them all, and so like the other phases of the game, this part is also absolutely critical.

In fact, every decision you make in Dominare has ramifications, and sometimes you won't know what those consequences might have been until you're sitting two hours later, still talking about how much you loved the game, discussing the game-breaking maneuver that your friend pulled off at the last minute, the one that forced your hand and made you over-commit so that you didn't have the resources to snatch that one last block that would have won you the game.

And Dominare seems to know when it should end. Any shorter, and the stakes wouldn't be as high. Any longer, and it would get old. Every time I've played, it builds to a fever pitch with an explosive finale. You're just invested enough to love the battle for the top spot, but it's not like you spent eight hours on a game that you ended up losing.

OK, so here's the warning - Dominare is very dense and very European in flavor (even though I'm pretty sure it was made by Americans). You can see people get killed - we had a public execution in one game, and an assassination in another - but it doesn't happen a lot. If you're looking for blood, you won't find it here. But you will find intensely deep, exceptionally entertaining gameplay that will have you plotting and scheming and backstabbing.

Reading the cards for Dominare, I realized how much I would really love to read some novels about Tempest. You could have a bunch of them, written by different authors and covering different characters. The city feels alive, and the characters are brilliant. I want to know more about Tempest, and when that happens, it means the theme is coming alive while I play.

I liked Courtiers, Love Letter and Mercante. But I love Dominare. If you're only going to get one of these games - well, don't do that, get them all - but if you're dead set on picking just one, Dominare is utterly magnificent. If you don't like Euro games, it might not be for you, and if you have trouble grasping complex rules, you'll probably be frustrated. But if you want to play a game so deep that you'll need scuba gear, you want Dominare.

Pros:
Plot and scheme and plan (all of which are essentially the same thing)
Great art
Deep theme that draws you into the game
You'll be talking about it days later

Coolstuff Inc is not my new sponsor. I don't actually have one any more. But they do have this bad-ass game for just forty bucks, so I would totally go get it:
http://www.coolstuffinc.com/p/165352

Since its a euro, shouldn't the art be measured in metric??