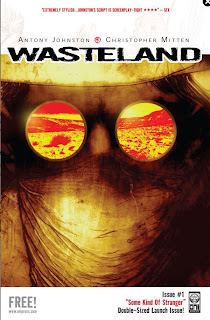 NOTE: Towards the end of this review, I mention that Wasteland is set to run 50 issues. That is wrong. It's 60 issues. My bad.

There are not enough post-apocalyptic comic books. It's one of my favorite story-telling genres, which explains why I tolerate so many zombie games (though the zombie apocalypse is not the same apocalypse as the nuclear apocalypse). And most after-the-bomb books tend to get silly, like that old Teenage Mutant Ninja Turtle game where everyone turned into animals. Because that's what would happen - nuclear holocaust causes an advanced case of Disney movie.

But even if post-apocalyptic comics were as common as superhero comics (and it's a damned shame that they are not), I would still heartily recommend Wasteland. It's mature and smart and exciting, and the author has created an immensely entertaining and believable world, and then spun a yarn that lets you feel like you're there. Only, you know, without the dying.

Wasteland spins a wide-spanning yarn by telling us about lots of different characters. One issue we're following Abi and Michael as they search for answers to their difficult questions, and then the next issue we learn what's happening in the city of Newbegin. There are some weird things, like super-healing powers or people who don't age, but mostly, the entire thing is incredibly believable. The supernatural stuff only serves to make the realistic stuff stand out brighter.

And just because a particular character can throw rocks with his mind does not make that dude the only character worth watching. There are plenty of normal characters, from the tough ranger who protects his village to the council member who plots to free his people from institutionalized bigotry. There are plenty of plotlines to follow, but they're not just free-floating and unconnected - everything matters, even if we can't see it at the time.

Wasteland also gives us tons of mystery. Every time some new tidbit is revealed, it only serves to raise more questions. We meet mysterious characters with involved pasts - in some case, pasts they themselves don't even remember. There are invading hordes of terrible monsters, cities populated by hideous mutants, and no small number of just plain rotten human beings.

Remember when I said that the author has developed his setting really well? You should, it was like three paragraphs ago. If you've already forgotten when I said that, don't bother reading comics. Concentrate on coloring books.

The author of Wasteland finishes every comic with a full written page by Ankya Ofsteen, a traveler whose mission is to discover the world and document it. In these stories, Ankya takes us from one end of the world to the other, meeting wildly varying people and relating experiences that we may never see in the comic itself. These tales serve to ground the entire world, to bring it bursting off the page in full color and cinematic 3D (which is funny, because the book itself is black-and-white).

You don't have to trust me on this one. If you're reading your comics on Comixology, you can download issue 0 for free. If you don't agree that Wasteland is worth your time, then you've saved yourself a bundle of money. If you do, then I have cost you about $84, which is how much it would cost you to get completely caught up. The author has stated more than once that he intends to finish the title with issue 50, and the latest book is issue 43, so there are seven left.

The only downside is that since Wasteland is kind of an indie book, it doesn't really update once a month. I think we'll be lucky if the last seven issues are done in 2013. I hope so, because I would love to find out how this incredible story ends, but I'm not holding my breath. However, even if it doesn't update regularly, hell, even if he never finishes the story at all, Wasteland is worth reading. It's the most intelligent post-apocalyptic comic I've ever read, and one of the best comics, period. Seriously, it's worth a free download to at least try it out.

Oh, one more thing - get the individual issues. Yes, they cost more than the collected volumes, but that way you get the Ofsteen stories. They left those out of the trades.
Posted by Matt Drake at 7:23 PM

God I am STUPID.

The writer of Wasteland let me know that he is actually going to issue 60, so I am also an idiot, though I am pretty sure missing a digit is less dumb than Pete giving us a link to an EPA fact sheet.