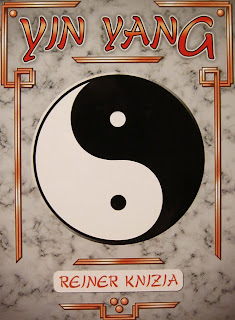 There's a great joy in being a game reviewer. It's found at the point that I walk in the door from work and discover a package sitting on the counter, one that my kids brought in when they got home from school, one that contains games I probably never even knew existed. Opening the box is like a mystery present from a distant relative on Christmas morning. Sometimes that relative is my rich uncle who always picks the perfect gift, and I break open a box full of Dominion expansions and the hot new dungeon crawls. And sometimes, that relative is my cheapskate brother. On those days, I get crappy Reiner games.

Point in case: The last package I got contained three games, one of which was called Yin Yang, and it was apparently packaged up by the broke-ass brother, because it was instantly identifiable as a crappy Reiner game.

I will say that I really like the direction Gryphon Games is taking with their card games. Packaging them in metal tins is really cool. The box looks like it would have fun inside, except for the one dead giveaway at the top. The clue that the box has less in common with fun than a colonoscopy? 'Reiner Knizia.'

The game itself is everything you would expect from a themeless Reiner game. You've got fifty cards numbered from 1 to (wait for it) 50. Then you've got ten cards with scoring combos. These scoring cards each have a number in a black symbol and one in a white symbol (I'm afraid I don't know which one is the yin, and which is the yang. I'm sure someone reading this does know. Before you tell me the answer, you should know that I don't care).

Here's the thing, though - you don't want to have any of these things at all. If you get a white one when you're holding a black, you just dump the black, and the other way around if you're holding white and win black. Best case scenario, you're empty-handed and everyone else has a bunch of one color or the other. You play nine rounds of this, then tally scores. Then do it again, and again, until everyone has the chance to deal once.

You might be reading this quick description and thinking, 'why doesn't that sound like fun at all?' And the answer would be pretty obvious - it's not fun. In fact, it's boring for a Reiner game, and that's really saying something. It's not as ridiculously horrible as Atlanteon, but I'm completely stymied as to why you would play Yin Yang over, say, tic-tac-toe. If you could turn Yin Yang into a drinking game, it would be great (and honestly, there's no game you can't turn into a drinking game - ask any frat boy), but it doesn't come with those rules. It only comes with the boring rules.

It's nearly impossible for me to see how a person would go about implementing a strategy in this game. We tried it several times looking for some intelligent approach, but nothing worked. We just could not find a way to make Yin Yang something that wasn't boring and/or lame. The game is unengaging, dull and trite. Why anyone would publish it is beyond me.

It might seem like I've written an overly short review. While I admit that this is a shorter review, I would also point out that there's almost nothing to the game. In fact, the back side of the double-sided rules sheet is in Chinese, because they had to fill up the little scrap of paper, and there sure weren't enough rules to cover all the space.

One quick note. If you've ever played Relationship Tightrope, then you've played this game. Like many old Reiner games, Yin Yang is a re-theme of an old game, though in this case, the re-theme is more like a complete stripping of theme. That's honestly an improvement. Reiner abstracts could largely benefit by having the themes surgically removed. Yin Yang is better than a game about dating. That doesn't mean it's a good game, just that it's better than one about two people fighting over which set of parents to visit at Thanksgiving.

So anyway, don't get Yin Yang unless you like crappy Reiner games. I know some people do, so knock yourself out. Oh, and if you see my little brother, kick him in the shin for me.

Pros:
Metal box is really cool
Art on the backs of the cards is also cool
Theme is way better than it was

If you really love crappy Reiner games, you might want to pick up Yin Yang. You'll have to wait until Gryphon Games actually has it for sale, though.
Posted by Matt Drake at 4:16 PM