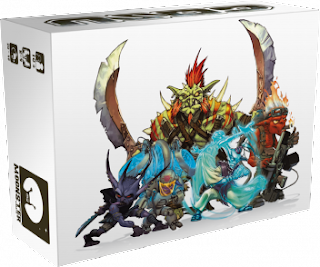 The game is called Gosu. That seems like an odd name, but it's a severely shortened version of 'Goblin Supremacy', which, now that I write it, is still a pretty odd name. You take turns playing goblin cards into your armies to try and win the great battles. It's not a particularly difficult game to learn, but there sure are a lot of nuances for a game where everyone doesn't have their own deck of cards.

There's just one deck in Gosu, and every card in the deck is a goblin. There are three levels of goblins, and five different kinds of goblins, and each goblin does something different. Some do stuff right when they come in, and some have abilities that you can exploit later. There are goblins that kill other goblins, which is handy, and goblins that trap other goblins, which is sometimes even handier. Lots of the goblins let you draw more cards, and that's particularly important because otherwise it can be damned tricky to have enough cards to do something.

In fact, a large part of the game is balancing your need to whoop ass with your need to have cards to play. Focus too heavily on playing cards and killing the other guys, and the next thing you know, your hand is empty and you have to sit there while the guys you have been stomping take turn after turn, gleefully stabbing your goblins in their soft parts and building enormous juggernaut armies that you couldn't hope to defeat. But spend all your time drawing cards, and you could wind up with a squadron full of goblins who sit around with their collective thumbs up their collective asses, and once your huge army of losers wins one fight, you're hopelessly incapacitated and all the long-term planners will pick apart your army like a demented kindergartner pulling the wings off flies.

Technically, you win this game by getting three victory points, and you get victory points by winning the battles that happen after everyone runs out of stuff to play. The battles are a little anti-climactic - you just see who has the biggest army, and that guy wins. But so much is riding on the battles that the game is all about the cards you play getting up to that point. You have to plan ahead if you're going to put together the right combination play. The voices in your head will sound something like this:

'I need to kill that general. If I play this shadow, I can kill that general. Except that in order to play that shadow, I need to discard two cards, but I don't have those cards, so I need to get more cards first. If I play the ancient, I can draw two cards, but it will fill up the row, and then there's no room for the shadow. But I could mutate this alpha into the shadow after I get the cards off the ancient, but if I do, I won't be able to play this bigger alpha, which I need to win the battle. But if I play the bigger alpha, I can't use his ability yet, which means he's a waste, so I want to wait to play him until after the battle. So I'll play the ancient to get the cards, and instead of the shadow, I'll mutate this fire into a meka, which will let me...'

And then you'll realize that you have completely forgotten what you were trying to do in the first place, and you'll discard the shadow you needed, mutate the alpha, and end up discarding the rest of your cards to pay for cards you shouldn't be playing anyway. So, see, you have to think.

There's a great balancing element in Gosu. Many cards have bonuses on them, but you can't use the bonus unless someone at the table has more points than you. So it's a completely viable strategy to let one player win the first battle, and then use the bonuses with the cards you decided not to play in order to totally blow the doors off everyone else. That player who thought he was winning will get to feel stupid, and if that isn't why you play games, then you're not having as much fun as you could.

Gosu has nearly everything I like in a game. There's absolutely fantastic art, a fun theme, and considerable violence with a healthy body count. There's planning and strategizing and quick tactical plays. It's got enough friend-stabbing that you can make young children cry, and you'll have to make really tough decisions, often without having enough time to think about them. It's fun and good-looking and comes in the coolest box ever (though I fail to understand why the box is as huge as it is).

If you like games where you have to think a whole lot while committing aggravated assault on ugly humanoids, Gosu is a blast. It's oddly refreshing to play a card game that does not make you build your deck on the fly, because it's starting to seem like that's the only kind of card game being made any more. With stunning art and tons of depth, Gosu is likely to see a lot more table time at my house. Only I'll have to play it with my friends, because my kids get upset when I kill their goblins. When I'm playing with family, I'll probably have to stick to deck building.

Pros:
Surprising depth
Lots of options
You'll have to balance a lot of factors to keep yourself in the game
The art is totally wicked
Lovable body count
No deck building

Cons:
Nothing comes to mind. This game is really fun.

Surprise! You're never going to believe this, but Dogstar Games is not carrying Gosu. I know, that's almost as hard to believe as a card game that isn't about deck building. Noble Knight has it, but it's out of stock. Here's the link, in case they get more:
NOBLE KNIGHT LINK THAT IS TOO LONG TO JUST PASTE IN HERE
Posted by Matt Drake at 2:46 PM

Great review of a very sweet game. Just played it tonight with my son and I learned some hard lessons. Can't wait to play again.

Very nice and very fun review ! I tried the game yesterday and I really like it ! Thx again

And probably publishers start to be tired to read ner...ehm gamers complaining that their cards don't fit back in the box once sleeved :P