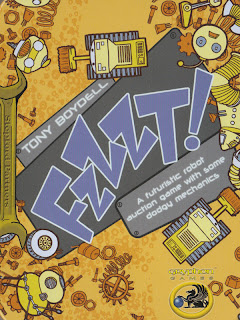 I once complained at some length about the exclamation point in the game Attack! Since then, I have noticed this increasing trend of putting inappropriate punctuation into game titles. It's not quite epidemic level just yet, but it is getting pretty out of hand. It's bad enough that publishers are not only comfortable using improperly placed punctuation, now they're preceding those errant marks with words that are not actually words.

I'm referring, of course, to Fzzzt! You probably knew that, though. Not only are you educated enough to be able to guess which game I meant without any assistance, but I also actually said the name of the game in the title of this review. That tends to narrow it down.

I could rail on at length about how absurd it is for actual grown men to invent a game that doesn't have a single vowel, but instead, let me tell you why I don't care. The reason is simple enough - it's fun. Fzzzt! has players bidding for robots as they become available, then using those robots to build widgets. The robots you win go to your discard pile, and then they help you win more auctions that will also help you build more widgets. So what we're looking at here is an auction-based deckbuilding game, which is a sort of snooty nerd way to say it's a card game where you get more cards as you play.

It's kind of ironic that I'm able to have a good time playing a game when inviting players to join me involves making a sound a little like an epileptic llama, and if I want to say it correctly, I have to make that sound really loud. But it's so easy to learn how to play that you won't have to make that sound for long before someone will come over and ask you to stop spitting so enthusiastically. Then they'll join you, because the rules are simple and the game is a hoot.

You start off with four cards of varying power and go through eight rounds of bidding on cards that you can use to win the game. There are the robots, of course, and these go into your discard pile, which you'll shuffle and replay several times as the game progresses. Then there are production units that you can finish by plugging robots into them at the end of the game, assuming you scored enough robots to finish them, and you better hope you can so that they don't cost you points at the end of the game.

But of course, the irritation with the ridiculous title can't end just because you've started playing. One of the cards is actually called Fzzzt!, which means you have yet another opportunity to hiss like an ice cube on a hot skillet. This card is kind of cool, because it has decent bidding power, but it's also a penalty point at the end. It's kind of worth it, though, because you could score like 80 points anyway, and that one point isn't going to be the deal breaker, unless you have a bunch of them, and then you're dumb and shouldn't have done that.

Fzzzt! plays out pretty fast, like half an hour or so, during which you'll probably only have to actually say Fzzzt five or six times. You don't have to yell it, of course. That's optional. But what's not optional, if you want to win, is a good mix of planning ahead and raw luck. You'll have to make some smart calls on the spur of the moment - if the guy before you bids three cards, and you really want that robot, you'll have to pick some good stuff to fight him, or decide if it's worth running him out of cards so you can get an easy shot at the next one. There's a nice mix of 'he who hesitates is lost' and 'strike while the iron is hot.' Maybe it's 'he who hesitates is hot.' But that doesn't make any sense. So never mind.

So here's the deal, publishers - enough with the silly names. But if you are going to make silly games that sound like dog farts, use Fzzzt! as a template - make them fun. And make them like the Gryphon Games reprint, and put them in one of those cool tins, and have an expansion with a bunch more cards so you can play it with six people. Then I'll forgive your ridiculous naming conventions.

Pros:
Easy to learn
Deceptively clever
Neat auction game meets easy deck building
Plays fast, so you can play it a few times in a row
Good balance of planning and quick thinking

Cons:
Not a lot of long-term strategy
No vowels
Errant punctuation

As far as I can tell, the Gryphon Games reprint of this game is not out yet. It should be, sooner or later. Hopefully sooner. It's fun.
Posted by Matt Drake at 6:54 PM