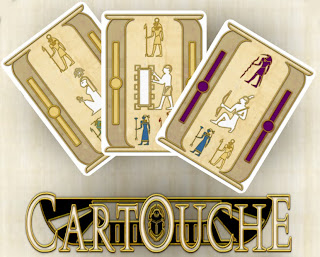 One thing I've noticed a lot of big-shot reviewers doing is deliberately inserting stuff into their articles that can be easily quoted. Stuff like, 'fantastic four-player fun' and 'great family entertainment' are easy to stick into a banner ad or something, and then not only do you help sell the game, but your name should be right under the quote. I figured I might try it, if only to try to get a little free press.
So the game I've chosen to try out my new reviewing methodology is called Cartouche. It's from one of my favorite small-press publishers, Small Box Games. In Cartouche, everyone plays Egyptian rulers trying to build dynasties. You do that by doing something you just don't see in games these days - deck building.
OK, so maybe you do see the odd deck builder come out now and then. The entire hobby gaming industry is rife with deck building. After Dominion winds up making tons of money, deck building is so hot, it's burning. It's catching on, in a big way. You might say it burns, and it's extremely contagious.
Cartouche is pretty typical for a Small Box game. Even for a mechanic as basic as deck building, it has some confusing rules that don't make a whole bunch of sense until you play a little, and even after you explain them it will still be hard to play for a while, though the game itself can be finished inside half an hour. It's not very long, but if it's your first time, you'll feel it.
Once you understand the rules, Cartouche is pretty cool. I didn't think so the first time I played, but after I tried it again, I saw how you could really put together a winning deck here. Spotting the strategies is tough at first, but if you really put some effort into it, Cartouche has some legs. After a few turns, you shouldn't have any trouble figuring out how the game works, and then you'll see how many ways there are to play this game. It does a lot, for not being hard.

The basic mechanics of Cartouche are a little tricky at first. You've got six deity decks, each with a bunch of cards that have symbols in the middle and little pictures of deities at the bottom. The picture in the middle tells you what power that card has, and the pictures at the bottom tell you what cards you could buy with them. That's really the crux of the game, using what you have to get the cards you need to win and trimming your deck to keep it efficient. The size of your deck isn't important, it's all in how you use it.

For instance, if you have a soldier and an armory, you can steal cards from another player, but a builder with no pyramid is dead weight. If you have the flood, you can wipe out another guy's draw pile, unless he has a boat. There are scarabs and pyramids and ankhs and stuff, and they all do something. You'll need to pay attention to the cards you're getting, because scoring is all based on combinations of cards. Scarabs cancel plagues. Scepters only score if you have the most of them. Priestesses only score with ankhs. Figure out how to score, and you'll have a great time.
It's not all wine and roses, though. For one thing, the appeal of Cartouche is hard to spot if you're not looking for it, and it's pretty dry, thematically. It lacks the tension and depth of Dominion (you had to know that comparison was coming), and it's subtle enough that it can look boring as hell on the surface. It's really plain-looking, but it's got personality.

And then there's the worst part - the cards blow. Not the stuff on the cards, like art and what-not, but the cards themselves really suck. I don't know if this happened to everyone, but in my game, the cards aren't all the same size. It makes it really hard to shuffle a deck of cards when they're all different widths. My wife honestly mistook it for a homemade game, especially because all the cards are half the size of normal cards, but they come in a box that would totally have held them if they had been normal size. I don't know what possessed Small Box Games to sell us a miniature game, but it was a bad call. Let's face it, size matters.

Cartouche is a fun game. I wouldn't say it's the best Small Box has made, but it's certainly enjoyable, with a surprising amount of depth and versatility. The teeny tiny cards were a horrible decision that makes it harder to play than it should be, but even still, my wife and daughter both said they would like to play it again. That's a good omen. Plus it's got huge boobs.

(That last sentence didn't mean anything. It's just there to be quoted.)

[DAY LATE EDIT: John Clowdus, the mastermind behind Small Box Games, informed me today that not all the decks were screwed up by the printer. Also, if your cards are messed up, contact John to get replacements.]

You're in luck. Usually Small Box Games has sold out of their games by the time I review them, but right now, you can preorder a copy and get it in a month or so. Here you go:
http://www.smallboxgames.com/cartouche.html
Posted by Matt Drake at 6:29 PM

Thanks for the review. I have been so curious about this one. All I have heard is that the cards stink. Well, you have confirmed it. The rules sounded good when I read them but in play it sounds like you would need to get into it to enjoy it. What do you think could be done to make it have a little more oomph?

The small cards are dismal, but at least the cards in my copy seem to be all the same size.

The game is quite cryptic - I had to do a rules overview for myself, then it made quite a bit more sense. I'll have to see how it plays, though.