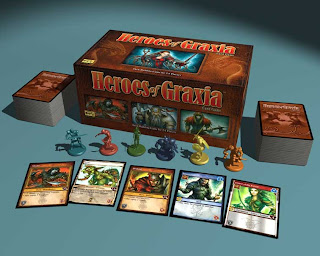 Petroglyph Games is definitely making a name for themselves in board and card games. I think it's time for them to come up with a good slogan. Believe it or not, I have one they can use:

"Games for your head."

And when I say, 'games for your head,' what that means is, 'games that make you do more math than a certified public accountant.' The ol' cerebral adding machine is going to get one hell of a workout on any Petroglyph game I've seen so far. Even when they make a deck building game, it's got a buttload of math.

But lots of math isn't always bad. Take Heroes of Graxia - this game has a whole heck of a lot of adding and subtracting, but it's still an incredibly fun game. It seems that if a game provides enough awesome stuff, it can offset a painfully enormous pile of math.

One of the great elements that Heroes of Graxia provides is bloodshed. As all real men are aware, games are better if there's violence, and Heroes has violence enough for everyone. In fact, the whole point of building your deck is to be able to commit more aggressive bodily harm. You win the game by having the most prestige points, and you get prestige points by killing things. Whether those things are the legions of the other players, or just random marauding monsters, the way to win is to do lots and lots of violence.

And then you need to tell me a story. A good theme goes a long way toward making any game more interesting, and Heroes of Graxia has a wonderful theme. Cool fantasy bad-asses fight all over the place, winning magical weapons and powerful auras against giants and dwarves and undead and all kinds of stuff. You'll build your army while your enemies build theirs, trying to amass a force powerful enough to stomp all over everyone else and slam their fingers in car doors. Then you'll wage war against everyone, and charge into battle against heinous monsters. The story expands as you play. It's a story about getting into fights and then killing things, but those are some of my favorite stories.

It helps a story along if you have really pretty pictures, and Heroes of Graxia has the kind of art that will turn heads. Every card is beautifully illustrated, with art so good it makes you want to play just because it's so damned pretty. The images are better than you'll see from nearly any other publisher with only four games in their catalog, I'll tell you that.

But story and violence and sexy art aren't enough to make a game awesome. It has to make you work, plan your strategy, and push yourself to get just a little farther ahead. Once again, Heroes of Graxia delivers. Because there are victory points on some of the cards you can buy, a deck that emphasizes buying power might be just as viable as one hell-bent on crushing skulls. A balanced deck is important, too - lots of attack power isn't going to last if you have a feeble defense. Those monsters fight back, and your opponents aren't going to just sit there while you build a peaceful hippie commune and grow hemp.

But let's say you don't really feel like picking fights with your friends. You can still build a powerful deck that never has to go into battle against the other players. Just lean heavy on defense, and buy spells and armor that are more potent against monsters or when you're defending. An army bristling with power is going to intimidate players looking for an easy fight, and like the saying goes, you don't have to outrun the bear, you just have to outrun the slowest guy. As long as someone at the table is the weakest link, you should be able to concentrate on bringing down the mightiest monsters, and let the other guys duke it out. It's the tortoise-and-the-hare strategy - just keep moving ahead, keeping your head down, and let the hot-heads run the table while you quietly pick up all the cards that make you the winner.

While there is a fantastic amount of strategy and planning and cool moves, none of it happens in a hurry. In fact, if two other players at the table are constantly battling each other, you'll spend a lot of time watching. It can get seriously tedious, especially because battles are a flurry of card play followed by ten minutes of third-grade math class. While the other guys are double-checking their addition to make sure they didn't forget the bonus they get because the knights are defensive and the orcs are pulling power from auras, you will have time to make a sandwich and check your Facebook. (By the way, real men do not check their Facebook while they are killing other people. It's rude.)

If you're looking for a quick game with easy rules, just keep walking. Heroes of Graxia is not designed for pussies. You'll need some stamina to finish a game, but after you do, you'll be talking about all the stuff that happened for the next hour, and figuring out when you can get everyone together to play again. It probably won't be that day, though - your wife is going to be wondering when you're coming home, and you're probably low on beer by now, anyway.

So sure, there's a lot of math. But if Heroes of Graxia took all the math out of the game, it wouldn't be anywhere near as fun. The math gets huge when armies get enormous, and then the mayhem goes from exciting to epic, with rivers of blood flowing right through the middle of the table and past that sandwich you made while you were waiting for it to be your turn again. It's brutal and thrilling and brilliant, and if you have to do some addition to get all that, well, that's a small price to pay.

If you've got the staying power to play this game, I can't possibly recommend Heroes of Graxia enough. It's hardcore and brutal and fun as hell. And it's available at my new sponsor, Noble Knight Games. Run over there and show them some love:
HEROES OF GRAXIA AT NOBLE KNIGHT
Posted by Matt Drake at 9:29 PM

This game is much better than Ascension. It's on par with Thunderstone, but TS takes the edge for providing a satisfying solo experience.