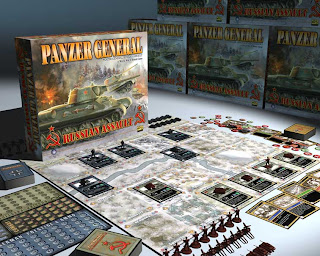 About six months ago, I reviewed a game called Panzer General: Allied Assault. I have to spell out the whole name, because even though it's a really long name and anyone referring to the game who isn't selling it in a magazine is going to call it Panzer General or Allied Assault or something, there's a sequel out now called Panzer General: Russian Assault. Yes, that was a really long run-on sentence. And yes, I did that on purpose. My twelfth-grade English teacher, Mister Smollen, would be very disappointed.

The overrun rules (and the associated rules for if you're stupid enough to shoot at someone when you don't stand a snowball's chance in Hell of hitting them) are designed to avoid having to go through all 37 steps of combat when a healthy battalion of tanks rolls up on one guy taking a dumper behind a trash can in the park. That guys should just die, but instead you have to check a whole bunch of stuff and play cards and other annoying minutiae that really isn't necessary and certainly should have been simplified out of the game completely. But if you're outnumbered badly enough, you just die. Or if you can't do any damage, you don't shoot. That way the turns ends faster.

Except it doesn't end faster, it actually takes more time, because you get one chance to even up the odds, which means you have to wait while your opponent checks through his entire hand of cards to see if he can add three points to his defense and thereby make you have to follow all the steps before you blow his face off. And then he probably does, so then you still have to follow all the steps until you finally figure out that the one guy hunkered down next to the port-a-potty is thoroughly, irrevocably doomed.

So those rules don't do much for me, and I don't see that they were needed. But one thing that is nice, and does really help a lot, is a bag full of toy soldiers. These tiny tanks, soldiers and howitzers go on the various cards on the board, so that you can see at a glance if you're firing at a hard target, if you get a defense bonus for terrain, and if you have any ranged support close enough to blast additional holes in your victims.

There are a few more tweaks and stuff, plus a whole lot more scenarios. If you've played Allied Assault until you ran out of scenarios, you may want to get Russian Assault just to try something new. If you've played Allied Assault two or three times, still haven't managed to find time for a solo game, and don't really want to read all the rules again, don't get Russian Assault. It's just going to collect dust.

But let's say you don't own either one of these games. Let's say you're looking for a game that acts like a video game trying to be a board game, and you want it to be all about World War II. Well, you're in luck. This game has your name on it. If you're trying to decide between Allied Assault and Russian Assault, get Russian Assault first. It's got more stuff in the box.

I'll say the same thing about Russian Assault that I said about Allied Assault - I really like this game. The variety of units and layouts, the customizable maps, even the overly complicated combat all add up to a good time. There's tons of careful planning and risky gambits, tactical brilliance and dumbass mistakes. It's way too complicated for being this simple, but I liked it even though it moves at a pace close to the average land-speed of a tectonic plate.

So, pick your scenario to help you decide if you should buy Russian Assault.

So, to sum up, we've described the slight differences between Russian Assault and Allied Assault, we've figured out whether you want to buy Russian Assault or not (well, I have), and we've committed various gross acts of disrespect against the English language, and tangentially, my senior-year English teacher. I hope Mister Smollen can forgive me - he was the best English teacher I ever had.

Cons:
Still slower than Christmas
Not enough new to justify a whole new game unless you've played the hell out of the old one

Dogstar Games is carrying Allied Assault. Hopefully, they'll soon also carried Russian Assault. In the meantime, here's the link to the first one, at a healthy discount:
http://www.dogstargames.com/product/PTG20001
Posted by Matt Drake at 7:46 PM