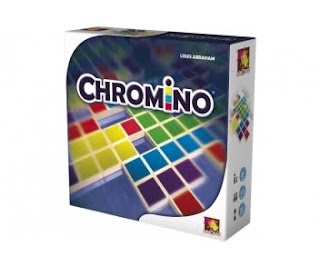 I've never been a huge fan of dominoes. That may be linked to the fact that I've hardly played dominoes, but I've played more games of dominoes than I've played Race for the Galaxy, and I like Race for the Galaxy, and I don't like dominoes, so there goes that theory. Mostly, it's that I tend to think they're kind of boring. Maybe I'm missing the strategy in a games of dominoes, but every time I play, I just end up thinking, 'this is stupid. Can we play cards?'

So I confess to not being overly excited about Chromino, because frankly, it looks an awful lot like dominoes. Only instead of having pips, you have colors. And instead of having two sides, you have three blocks on each tile. To place a tile, you have to match at last two colors with tiles that are already on the table.

Now, that sounds like dominoes for retarded kids. 'It's OK if you can't count, junior - you can play this game instead! (unless you're color-blind AND retarded, and then you're just screwed)' How hard can it be to match colored tiles? That's even easier than dominoes, and dominoes is already too easy.

Aha! But it's not that easy! In fact, it's damned clever. It has a lot of the strategy of dominoes (holding onto some pieces because they'll be easier to play later, or blocking moves that force opponents to pick up extra tiles, for instance), but it also has a lot more flexibility. Dominoes tends to make a long twisty snake of tiles, but in Chromino, you end up filling the whole table with this expanding tableau of colored pieces. And because of the way the table fills, there are times when it's more like a game of Tetris than dominoes, because you're having to twist the pieces in your head to see if they'll fit in the narrow gap that will block your opponent from using the wild card tile and dumping his last piece to win the game.

There are also some neat variants in the box, and more stuff online - only to read the stuff online, you have to know a little French, because it's not in the English version. I don't read French, so I'm not sure what's online, and frankly, that pisses me right off. There's this awesome solo puzzle version of Chromino, but you only get one puzzle in the box, and the rest are online, and I can't find them because I'm an American, dammit, and we don't ever bother learning other peoples' languages!

I particularly like the expert rules (those are in the box, and they're in English). We tried a couple games with the basic 'Uno' rules, but when we played with the scoring rules, the game took on a whole new dimension. Rather than simply trying to dump everything in a hurry, now we were looking for big scores, setting up future moves, and maneuvering to force opponents to take losing spots. This is a WAY more interesting game.

The funny thing is that even though Chromino is just dominoes with colors, I really like it, and I really don't like dominoes. A good friend played with us, and he does play dominoes, and he also liked it, so it might be hard to say exactly who would dig this game. Obviously, it's an abstract, so you're not going to be happy if you're a theme whore, and it's very simple, so it's not going to appeal to your average chit-shoving grognard. But it's a great family game, and an excellent choice for holiday get-togethers, since it can be easily enjoyed by your 'normal' aunts and uncles who flew in from their Kentucky farm where they make soap from lye and goat turds, and still think you're weird because you own Arkham Horror.

Pros:
Easy to learn, fast to play
Great mental challenge that will really get your brain working
Very attractive plastic tiles
Forethought and strategy can make up for a bad hand
Still enough luck of the draw to let Gramma Agnes win a hand even if she forgot her Alzheimer's medication

Cons:
Simplistic and abstracted - may not appeal to 'hardcore' game nerds

Dogstar Games has Chromino, and if you get it, you should get it from them, because they keep me supplied with the games you want to read about. Their support allows me to answer your requests, and I would consider it a personal favor if you would buy your games from them.
http://www.dogstargames.com/product/ASMCHR002
Posted by Matt Drake at 7:10 PM

another for my wish list, thanks for the great review.
Is this a good one for kids around 8 yrs old?

Are they sturdy tiles, something that will not mold is better for where I live.

They're quite sturdy. And they're plastic, not wood, so they should hold up to the moisture very nicely.

Also, yes, kids can play this just fine. It's all color-matching.

hwere can I purchase this gamein what stores

In my opinion everybody should browse on this.

Great post. very informative for us. this is very creative post. thanks for sharing with us.
Stationery Design