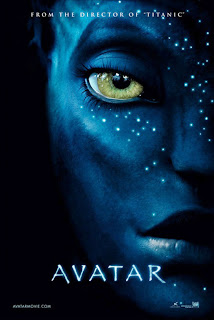 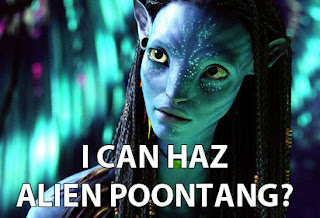 I think it's pretty clear that James Cameron is a Kevin Costner fan. I really liked Avatar, especially in 3D, and I liked it even more than the first time I saw it, when it was called Dances with Wolves. In fact, I wonder if the working title for Avatar was 'Dances with Cat People.'

I'm not going to deliberately throw out any spoilers here, but if you're one of those people who avoids hype like a social disease, you may want to wait to read this review until you've seen the movie. Me, I don't care about hype, but then, I'm jaded enough that I assume nearly every movie ever made is going to suck.

Avatar, for the record, does not suck. It's not particularly deep, and it's fairly predictable, but it sure is fun. In case you haven't seen one of the eighteen million ads for this movie, there's a dude who takes over an alien body so he can explore an alien world, and so he can chill with the indigenous cat people and swap body fluids with the blue-skinned hottie with the big eyes and the nipples that are exposed for half the movie. There's more computer-generated imagery than a Star Wars movie, and tons of really cool effects and monsters and stunts and all kinds of stuff that makes your average sci-fi movie fan get all soaked in his trousers.

(Ironically, my favorite effects were not the phosphorescent tree tubers or the leaping alien jungle cats. My favorite effects were the robots, because they were bad-ass. They have these huge guns and they're wicked powerful and meaner than hell, and the marines (who are the bad guys) are so believably cool that half the time, I wanted the humans to win, even though we're supposed to be rooting for the blue furries.)

I wouldn't generally be a fan of a movie that is as predictable as Avatar, but it was actually kind of comfortable, like watching Wrath of Kahn for the sixth time, waiting for Spock to say that 'good of the many' line. It doesn't really matter that the movie doesn't surprise you, because you don't want it to surprise you. You want it to take the course you know it will take. You want to see the romance, and the fights, and everything else you know is going to happen because you're over ten years old and you've seen more than three movies in your life.

In fact, the movie is so comfortably predictable that you don't even mind the heavy-handed 'humans are a virus' message that we've been enjoying for the last fifteen years. You know the message is coming, but the characters are so likable and the story so exciting that it doesn't really matter if you can spot the impending morality play. If you've seen just one trailer, you know the plot, and you probably know how it will end. What you don't know is how cool the huge elephant guys will look, or the flying dinosaur thingies, or the intensely cool robot jocks.

And really, the actors may have had top billing, but the real star of Avatar is the computer that made everything look awesome. I guess it compares on some level to the first Transformers, where you could overlook a stupid plotline, horrible script and even that douchebag lead actor because at one point, the jet turns into a robot and punches the other jet and then turns back into a jet. Only this is far superior to Transformers, because the story actually works, as opposed to Transformers that didn't make any sense whatsoever, but was basically an excuse to see robots punch each other in the metal junk.

In fact, more than just a story that works, Avatar delivers characters that are believable and sympathetic. Even the bad guys seem like they have some history to them, including the head bad guy who was actually just a really good marine. The characters don't surprise you, but their actions and dialog seem natural, which is more than I can say for a lot of action movies that include smooching.

(On the matter of smooching, can I just say how convenient it is that the aliens are so much like humans? It would have made the romance a lot more uncomfortable if the human skinwalker had been doing weird alien butt probes on the sexy chick in the loincloth.)

If you're looking for the next Citizen Kane, or you're the kind of movie snob who can't enjoy anything if it wasn't made in France, you're going to hate Avatar. It's not a particularly original tale, but it is a boatload of fun, and a complete visual feast. The characters are as likable (or not) as they're supposed to be, the fighting is fast and furious and fun, and the story manages to avoid any truck-sized plot holes. Avatar is enjoyable, entertaining and gorgeous. That makes it good enough for me.

Pros:
Amazing visual effects
Story is comfortable, if a little predictable
Characters are believable and likable, except for the bad guys, who are believable and unlikable
Doesn't rely on 3D, just uses it to make a very cool movie

Yep, what he said.