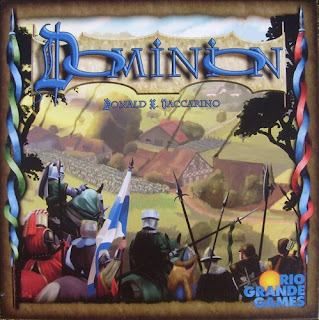 I've played lots of card games in my day. Poker, canasta, bridge, plus stuff like Mille Bornes and Race for the Galaxy and other non-standard card games. Without getting up from my desk, I could list fifty card games I've played, and some of them were really awesome games. I say this so that when I tell you that Dominion is one of the best card games I've ever played, you know I'm not working with a limited frame of reference.

The theory behind Dominion is brilliant. Basically, you're building a deck of cards that you'll use to grab the victory points - and this isn't the preparation, that's the game. You're going to buy a militia to get more money to spend and a moat to protect you from enemy militia. You're going to buy a workshop to get small properties easily, and a market so you can afford the big stuff. Some cards let you draw more cards into your hand, some let you take more actions, and some just screw the hell out of everyone else at the table (those are some of my favorites).

On your turn, you'll have a hand of cards. You fill that hand with cards from your deck, which starts out really small at first and grows as the game progresses. When you run out, you shuffle and draw again from the same pile. You can use action cards to do stuff like get more cards in your hand and have a little more mad money, and you can chain these cards together to have this whole display of extra money and more actions and a hand of cards so big you could buy Paris. And you could just focus on buying those victory points, but that's not a great idea. For one thing, those victory points are completely worthless cards until the end of the game, and for another, the best victory cards are wicked expensive.

There is, however, a significant part of the game that changes every time you play, and this is because there are like 30 little mini-decks in the box, and you only ever use 10 at a time. So you won't have the adventurer in every game, or the thief, or the throne room, and that means the strategy changes dramatically every game. You'll want to play a whole lot to understand the winning strategy for different combinations of abilities. For instance, if there's a garden and a fair, you can use the fair to get additional buys, which will let you fill your deck with cards, and then buy up the gardens which score more points based on your deck size. Since there are hundreds of possible card sets for any given game, the winner tends to be the guy who can see winning combinations popping up like lesbians at a California liberal arts college.

I absolutely love Dominion, to the point that I would not only never consider trading or selling it, but I'm actually considering blowing off a few reviews so that I have more time to play it. But it's not all wine and roses (or crack and hookers - I don't know what you're into). For one thing, there's supposed to be a theme here, but I was never really feeling it. It's got that European stodgy fantasy thing where throne room politics are more interesting than stabbing people, and there's a minimal amount of interaction (unless you're playing with the screw-yer-buddy cards). Compared to Arctic Scavengers, Dominion's theme feels almost like an afterthought. Why dropping a moat lets you draw more cards is beyond me, and doesn't really fit into any kind of story.

Plus, depending on what cards you're using when you play, Dominion could almost be a solo game where you have to wait for your turn. It's more fun than shooting ill-behaved children with a BB gun, but it can wind up leaving you curious why you need the other people at the table at all. Of course, if you're playing with the guy who always breaks out the attack cards, this is a different story - you'll spend the whole game trying to defend what you're building while you take shots at everyone else.

In a game this good, I don't much care about theme. It's so fun, the theme could be Mister Rogers, and I would recruit homeless people to help me put together the King Friday/red cardigan/McFeely combination. And if you don't like the solo-style game, just make sure you play with the cutthroat cards. Any criticism I might have of Dominion is completely overshadowed by the fact that this is a staggeringly awesome game.

Pros:
Incredibly brilliant concept
Simple in design, but layered genius in execution
Requires quick decisions and a good long-term strategy
Really makes you think, and has no pity on the crappy player

In case you're one of the last eight gamers to decide whether or not you like Dominion, and now you really want to buy a copy, you can run right out to Dogstar Games and pick up a copy. And you should, because they're wicked awesome. Not only do they support this site, but I've had occasion to talk with some customers recently, and Dogstar makes a point of taking care of the people who give 'em money. Here's the link:
http://dogstargames.com/product/RIO370
Posted by Matt Drake at 10:56 PM

I was curious what you'd think of Dominion since its theme is kind of weak, and there is no killing, but it is nevertheless a very fun and well designed game.

And that's pretty much what you said. Comparing a game to tits is a pretty high mark from you, I think.