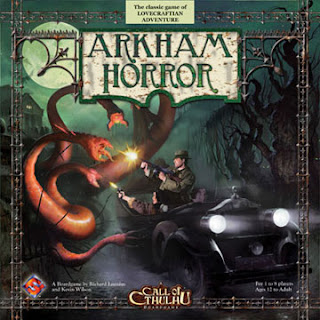 The more I play cooperative games, the more I see how different they can be. Some cooperative games are like tricky puzzles that everyone tries to solve (like Pandemic), some are trudging exercises in frustration (like Shadows Over Camelot), and some are just exciting, mad-cap romps (like sex). Arkham Horror is another kind of cooperative game, one I'm going to call awesome chaos.

For starters, you can tell this is a Fantasy Flight Game. It's got cards in three sizes - and there are several decks in each size. It's got a big ol' board, and a whole lot of counters, for everything from terror and sanity to health and cash. There's so much stuff in this box that even after I played it once, I wasn't sure what it was all for.

And then there's the theme. A good American-style game should have the theme layered on thick - since this is a Lovecraft horror game, I want to see slimy tentacles and inbred cannibals. And boy howdy, does Arkham Horror deliver on theme. If you pay attention while you play, you can actually see the story developing around you. Even if you lose, you'll have fun, just because you'll feel like you just finished a scary movie. Gates to horrific realms will open in the woods, or the witch house, or in some crazy old man's barn where he keeps the tools he uses to skin people so he can use their buttcheek skin for curtains. And you'll send your Roaring 20's characters running all over Arkham as the town descends into bedlam, shooting monsters and stabbing undead horrors and trying not to go completely insane every time they run up against a monster that looks like a rubber chicken with a face sculpted from soap bubbles.

One complaint I sometimes have with cooperative games is the Lead Dick factor, where one guy tells everyone else what to do because he's got the whole thing planned out and can't see any way that anyone else would want to do anything he doesn't want them to do. Possibly because he's a dick. Arkham Horror does not let the Lead Dick take over, because for one thing, there's too much going on for one guy to track it all, and for another, winning the game doesn't require the kind of obsessive planning that so many other games require. As long as you're not playing like a chump, you've got a reasonably decent chance of closing the gates before Cthulhu steps through and eats you all like crackers with spray cheese.

A good American game needs to have some violence, too, and it needs to feel like an ass-whoopin'. None of this 'discard this item and then flip the card' violence - I want to roll some dice, chuck some lead, and when the bad guy drops, I want to stand over his cooling corpse screaming, 'Yeah! Eat it, Bitch!' And again, Arkham Horror delivers, with an open-ended dice pool mechanic supplemented by spells and weapons that lets players gather power until they're ready to deliver some hot lead justice. And if they lose? They might just go crazy. That is AWESOME.

A good cooperative game needs mounting tension if it's going to be fun, and once again, Arkham Horror hits the sweet spot. At the beginning of the game, the investigators will have a little freedom to run around and pick up guns and spells and magic books made out of human hair, but as the game progresses and the monsters are running amok all over the town, things will get desperate. All manner of rubbery beasties will be rolling through town like a homecoming parade, with the heroes fighting their way through Hellish underworlds, staving off the impending doom with just their guts and firepower.

I've just barely scratched the surface of the awesome factor of Arkham Horror. It's not terribly well organized, and there's no way that a Euro nerd would call it 'elegant', but it's an unreasonable amount of fun. In a market continually saturated with clones and reprints and unoriginal crap, Arkham Horror delivers an amazing story-telling experience and tense game, and delivers it well. There's a reason this game is as popular as it is, and that reason is because it's damned fun.

Pros:
Great background
Tells a story while you play the game (without having to pretend to be other people)
Excellent action and a building sense of doom
A nearly perfect cooperative game

Cons:
Messy - so many parts, you'll need a box of sandwich bags to put them away

If you like cooperative games (or even just games you can play solo), you should get Arkham Horror, because it's very, very fun. If you're going to buy it, you should get it from Dogstar Games. You can get it cheap, even with shipping, and plus they support Drake's Flames so that I can keep reviewing the stuff you want to read about. Go here and tell 'em I sent you.
http://dogstargames.com/product/FFGVA09
Posted by Matt Drake at 8:30 PM

I own this game, and have tried to run it a few times, but the sheer number of rules and min-numbingly long gameplay have put off my gaming group each time.

And the rules are complex, sometimes needlessly so. Boardgamegeek has a some resources that try to streamline the turn process and summarize the main rules you need to pay attention to.

Game set up is also really laborious. More than descent even.

In the end this game has turned out to be too complex to be worth the time to master, and it just sits unused on my game shelf.

Man, that's a shame. It took us about 20 minutes to set up, though it did take me several times through the rules to figure out what I was doing. It can go long, but if you cherry-pick your bad guy, you could finish in under two hours (go with Yig for a short game).

But I do understand - this is a lot of game, and it's messy. I can't disagree with a single one of your complaints.

As a ridiculously-huge fan of H.P. Lovecraft and of Fantasy Flight Games (in general), I've got a serious chubby for ARKHAM HORROR and all its numerous expansions.

As with most Fantasy Flight games, yes, there is a lengthy "pre-game show" of setting up that one must endure (with the possible exception of TANNHAUSER...that sets up pretty quick)- but the visual and tactile end-result is worth every laborious minute of it for me.

The game *can* get lengthy if you're going up against one of the nastier Great Old Ones, but if (as Matt mentioned) you cherry-pick your big baddie - like Yig or Ithaqua - you can shave some time off the event.

I didn't find the rules to be all *that* complex, actually. I think it more a matter of the rulebook being so horrendously compiled (again, like most Fantasy Flight games). Our group has played ARKHAM HORROR a number of times and we're still sending out private detectives to find out what bloody page certain rules are tucked away on.

Our group also has the luxury (I guess you would call it) of having at least one "perfect bachelor" as a member of it. A game-nut who owns most of the things we play and always has a copious supply of very cold beer on hand at any given moment. This translates into us being able to leave a game set up on the kitchen table or wherever without running the hazard of the wife thinking it an unsightly juvenile mess or any kids getting the notion that those funny little pieces would taste good with a drop of peanut butter on them. So if something starts to stretch into the 3 or 4 hour range, we can all comfortably break for the night and resume it on the morrow.

This is a huge advantage for attempting to actually "play-to-conclusion" a Fantasy Flight game for the most part, and if it's something you can feasibly pull off I submit it for your consideration.