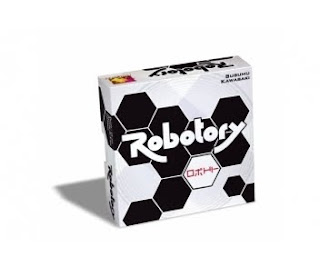 The future is now (please forgive this painfully cheesy and horribly overused cliche. It sounded a lot better than 'You can actually do that now').

Before someone points out the obvious, I do know that there have been games that fit in your pocket for just about as long as there have been pockets, so by the logic I presented in the first paragraph, the future took place a couple centuries ago, and we've been living in Star Wars since the birth of Christ. Having thoroughly mangled my opening, I think we'll just skip right to the review.

Robotory is a very small game (now that you read that boring sentence, do you see why I tried to gussy it up with that stupid 'future is now' gag? I hope so. But inevitably, some humorless tool at BoardGameGeek will tell me that he would rather my reviews were boring and dry, and take offense to me even attempting to be interesting. For that guy, may I suggest you start reading assembly manuals for power tools?).

So yeah, it's small. It comes in a box you could fit in your pocket, unless you wear very tight jeans, in which case I hope you are a girl, because otherwise you're either morbidly obese or a little bit gay. Let's just say it would fit in my pocket, huh? There's a board in this little box, and three robot counters, and a handful of little plastic discs in either black or white. Add in the miniaturized rulebook, and there's still room in the box, despite this being a very small box.

But size isn't everything (at least, that's what we men tell ourselves after we finish watching a porno featuring a man whose main talent is having a dingus he could wrap around his leg). There's a pretty cool little game in this cool little box. It's an abstract, but unlike a whole lot of abstracts (especially European ones - I'm looking at you, Reiner), it doesn't pretend to tell a story. It goes, 'there are these robots, see, and you move them by putting down energy markers', and then it quits trying to crap in a bowl and tell you it's ice cream. It just lets the game be the game.

The robots are three plastic markers that sit on a hex grid. One is white, one is black, and one is red. The black one moves by consuming black markers, the white one eats the white markers, and the red one swings both ways and eats anything it can get. One your turn, you can drop an energy pip, move a robot by following a path of the right energy markers (and then taking them off the board), or replenish your supply of markers. Since you can only do one thing, you have to time each thing, or you'll wind up with no good actions when you really need them. The game ends when you run out of energy markers, after which you check to see who has more robots on their side of the board, and that person wins.

Since Robotory is over in about five to ten minutes, I had the opportunity to test with a variety of players. One player thought it was kind of boring, which I can understand, because it's not like you're going to fit Squad Leader into a box you can put in your pocket (though if you did, I would buy it). Two other players enjoyed it so much that once I taught it to them, they immediately spent an hour playing against each other. It's got a fair amount of hidden strategy, a little bluffing, and a lot of planning. It's kind of like a high-energy version of checkers, so if you like a lot of theme, you're not going to dig the heck out of Robotory.

On the other hand, if you can appreciate a really fast game that allows for plenty of mental exercise and some careful timing, Robotory might be your thing. It's portable and quick, and will only set you back about ten bucks. Plus you can put it in your pocket next to your portable lawnmower and portable dirigible, once those are invented.

Pros:
Takes about 30 seconds to explain the rules
Surprising depth for a game that finished in five minutes
Small enough to take with you to dinner and play while you're waiting for the appetizer
Doesn't pretend to have a theme

Cons:
No theme
Short game
(Weird how pros can be cons, depending on who you're asking)

Here's a place where you can get Robotory for nine bucks:
http://www.coolstuffinc.com/main_boardGame.php?viewType=view%20board%20games&fp=Acc-ASMRobotory#Robotory%20Board%20Game
Posted by Matt Drake at 6:42 PM