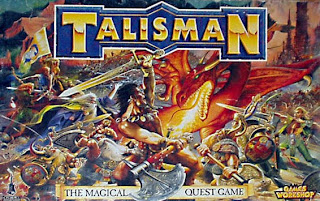 Remember when you were like nine years old, and you had your FAVORITEST GAME EVER, and you played it until it was falling apart? And then twenty years later, you pulled that game out of the closet, sweet nostalgia rushing over you like a waterfall of good will and joy, only to discover that stuff that appeals to fourth-graders tends to fall a little flat with adults?

We call that ‘Talisman Syndrome.’

If I were a child, if I still thought girls were gross and could actually sit through an episode of Thundercats without laughing at the retarded voiceovers, I would think Talisman was the most amazing game on the planet. Because if I was nine years old, I would be stupid.

The crazy thing is, I hear a lot of good buzz for Talisman. I don’t understand this. Nobody tries to recapture the greatness of Candyland, and Talisman is only marginally more interesting than Candyland. The only possible explanation I can find is that these people are the same people who spend days on end making supplementary material for HeroQuest when that game is actually only fun the first three times you play it, because when they were in junior high they blew an entire weekend on it and they’re trying to recapture the innocence of wondering why they didn’t get asked to Sadie Hawkins.

For the sake of clarity here, I’m reviewing the third edition of this ridiculously stupid game. I have to be specific because – I am not making this up – people have made four different editions of Talisman. For some people, that would indicate that it is obviously a brilliant game. For others (like me), it would indicate that there are an awful lot of people who have absolutely no common sense. After all, Apples to Apples sold a million copies, so standards for someone are obviously very low.

So that you can understand the way you play Talisman, let’s say you want to play Candyland. Only you want to make it an adventure game, so you let the players move forward and backward, and every time they land on Gumdrop Grove they can add some fat-ass points. Throw in some Licorice Bandits and the Caramel Creeper, make the entire game a random dice-fest with virtually no purpose or direction, remove nearly every single opportunity for decision-making from the game, and you have Talisman.

Every player gets a character (at random, because starting by letting you make a decision would set a dangerous precedent), and then you all wander around circular trails, encountering monsters and rolling dice and having virtually no control at all over the outcome of the game. You might start out an evil rat-dude, turn into a good guy, get eaten by a ghost and get a new character, and then have that morally-ambiguous dwarf get transformed into a toad because frankly, the dice hate you.

But even if the dice love you, you would still probably hate this stupid, stupid game. We had one guy win because halfway through the game he drew the Finger of Death spell, which instantly eliminates the super-villlain bad guy once that player gets to the tower in the middle of the hideous board (the board, incidentally, looks like it was drawn by a tenth-grader who was obsessed with metal bands in the early 80s. There are more skulls in the art for this game than you'll find in a French catacomb). While I was routinely losing my spells to evil wizards and severe head trauma, this guy managed to keep this one spell long enough to waltz into the dragon king’s tower and smoke him without rolling a die.

Call me crazy, but when I play a game, I want to have some control over the outcome. I want to practice some luck management, a little long-term strategy, and maybe a dash of practical common sense. I don’t want to have the entire game decided by a handful of die rolls over which I have virtually no control. I also don’t want to spend a quarter of the game bouncing back and forth between the witch’s house and the chapel because I’m attempting to give up my toad status.

I’ve played some really dumb games. Since I promise to eventually review any game anyone ever sends me, I have subjected myself to some of the absolute dregs of gaming society. I can definitely say that I have played games that were less fun than Talisman – Monster Quest comes to mind, for instance – but I would be lying if I said I ever wanted to play another iteration of Talisman. I have the second edition as well, and I think I even have the dungeon expansion for that one (my mind still reels that anyone thought this game was good enough to have an expansion), and I will be trading all of these copies as quickly as I possibly can.

It’s almost ironic that I just reviewed Tales of the Arabian Nights and loved it. Neither game offers a great deal of control for the players, and both games tend to be wildly random. Both games have you bouncing around the map like a kindergartner on crystal meth, and yet I really enjoy Arabian Nights and thoroughly despise Talisman. The difference is the story – where Arabian Nights leads you through an exciting and unpredictable story, Talisman plods through random, pointless fights with virtually no motivation or reason to continue playing.

If you just have to go out and recapture some part of your lost youth, don't do it with Talisman. Try this:
http://www.toyarchive.com/HemanSeries1.html
Posted by Matt Drake at 4:55 PM

It appears you have the third edition, in which case I don't blame your negative review.

So what's different/better about other editions, Daniel?

Do you review non-role playing games like Bailout! The Game? http://www.bailoutthegame.com

I review all kinds of board and card games (in fact, Talisman is not a role-playing game, and so your question is met with some amusement on my end).

Yes, Talisman sucks in 2010, but rocked in 1987. Strange how that happened, but happened it did. I'm amazed that the fourth edition has its fans.

I should probably stop alienating my readers, especially when they're also friends. I just can't help myself.

This must be why I spend every holiday alone, drinking a bottle of Boone's Farm and smoking six packs of Lucky Strikes until I throw up and cry myself to sleep.

Apples to Apples is fun unless you're playing with people who are too literal or are humor impaired. I consider it a great game because I've played a few rounds with certain people and have laughed at THEIR jokes, when usually I'm the comedian in the crew.

2 rules for A2A - if you start seeing the same cards, you're done. Put it away until next time. Don't use the Jr. Edition, either.

Oh, but I must mention Talisman again since that's the review de jour. Talisman sucks. Unless you've only played Monopoly your whole life, in which case Talisman looks like a brilliant achievement.

Hey! They should make Talismanopoly!

I had a similar experience with this game. Was recommended to me by a friend who said it was a great game he played as a child. With Fantasy Flight Games remaking it, I thought it had to be good. But... it's just kind of dumb.

Having said that.... to all you out there who still want it... it sells VERY WELL for us at Dogstar Games. I'm not sure why... but it does!

As I never played Talisman as a child I am more than a little mystified by its popularity.
However, I am going through a similar experience with Munchkin, right now. My 12 year old thinks it is the best thing since sliced bread (or sliced orc) and now I am having to play a game I'd hoped would never darken my door again. No nostalgia from me !

I am in the minority with Talisman, I like it...yes it's a retarded roll-and-move, but it's great to play with non-gamers who think that playing something involving Elves is witty and exciting. Beats the shit out of playing Apples To Apples....