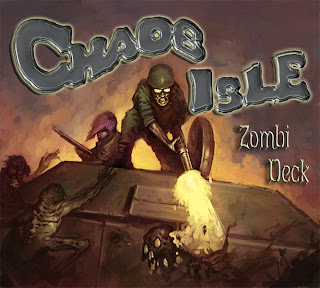 A while back, I reviewed a little card game Chaos Isle. It's a cheesy, campy brawl-fest where you kill zombis (no, I didn't spell it wrong) and try to complete missions. The nice folks who make the game were selling it in a big package at the time, to try to get you to buy everything at once. But they just picked up for distribution, and after the end of the year, you won't be able to get the bundle deal.

So this review is actually a dual-purpose device. First, I'm going to tell you about the expansions in a little more detail, so you know why you want to get the bundle and not just the base game to try it out. And hopefully, I'll also remind you to run right over and buy the bundle, because you won't be able to get it in a few more weeks, and then won't you feel stupid.

The first expansion I'll discuss is Fresh Meat. This expansion is mostly new characters for you to use as you run around the horribly named Chaos Isle and kill things. These characters are interesting, and you get a couple new missions and new equipment, to boot. But really, the reason you want Fresh Meat (beyond the fact that you're a completist) is for the new rules. Now you can play in teams, or for a really wacky variant game, you can just pit a team of zombis against everyone else's zombis and see who can kill the most in a hurry. The best new game style (and in my opinion, the best way to play the game) is Double Mission, where you have to complete two missions before you can win. This balances out some luck factor, and makes the game last a little longer - which is nice, because it's typically over in five minutes otherwise.

The second expansion, Reinforcements, is not what it sounds like it should be. Instead of being more characters, it's actually eight copies of one new zombi, and a couple missions where you have to get the food he's guarding before he destroys all the gasoline and gunpowder you've been stockpiling. I wouldn't say this is a critical expansion, but the new Exterminator zombi is a great new monster to fight. The new game modes are interesting, too - in one, you help Exterminator zombis kill all the other zombis, and in the other one, everyone fights to complete the same mission, instead of everyone having their own.

The final expansion is called The Lunatics, and this one I could have lived without. The characters are all escaped from the looney bin (thus the name), and so now you can play deranged little girls and body-snatching hospital interns. It's not like Chaos Isle is all about good taste, but this is even a little too messed up for me. The additional game modes, on the other hand, are great - cooperative mode is a fantastic way to enjoy the game, especially if you're playing with some fragile ego who cries if you beat her at chess (though why you're playing this horror show with your second-grader, I don't know).

All things considered, if you're going to get Chaos Isle, you should just pull the trigger and get the expansions at the same time. Right now you can save ten bucks and get some cool dice, to boot - but only if you hurry up. You've got until the end of the month, and then this offer expires, and you'll have to pay retail and hope your local game store decides to carry a copy.

Pros:
More new options for a game that is already fun
New game modes add a ton of replay and flexibility

Cons:
Still the same bad art on the characters (though like I said before, it grows on you)

Here's the link to get the bundle. Get it now, before it's too late:
http://www.realmsmastersgameforge.com/tearmylimbsoffbundle.htm
Posted by Matt Drake at 11:19 PM