Board Game Review - Tales of the Arabian Nights 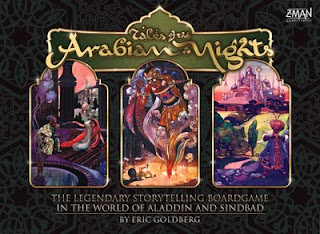 My favorite kinds of games are the ones that tell a story. Like when I was 12, and got my first copy of D&D, and we were able to tell a story about a bunch of heroes who went into some goblins’ home and killed everyone and then stole their crap. As I grew up, our stories got more interesting, until we were carrying out home invasions on a wide variety of bizarre creatures, most of whom had skin problems and anger-management issues.

Another thing I loved as a kid was the Choose Your Own Adventure line of books. These had really stupid stories that starred you, and you made choices, and those choices would send you to a page in the book where you would find out if you made the right call or if you were dead from an overdose of retarded. Like if you chose to steal the witch’s vase, then broke it, then you had to spend the rest of your life cleaning it up. I confess that nostalgia makes a lot of those books a lot better, sort of like the grown gamers who just have to break out Dark Tower once a year to try to remember why it was cool when they were nine, only to discover that it’s actually a pretty repetitive game with virtually nothing to appeal to an adult.

And apparently, I wasn’t the only one who loved these things, because somebody thought it was so awesome that they made Tales of the Arabian Nights, in which you and up to five of your closest friends take on the roles of characters from those stories, travel a map of Europe, Asia and Africa and spend an evening flipping through the mother of all Choose Your Own Adventure books. The game sort of died out, until Z-Man Games found it and re-released it, so that we could return to the days of hiding in dead cows in order to steal diamonds and escape from snakes.

The adventures in Tales of the Arabian Nights are a little bit random, but then, the stories in the book were often equally nonsensical. Am I the only one who thought the Sinbad stories were the result of some serious nights on the hash pipe? I mean, how long does a whale have to sleep on the surface to have trees grow on his back?

Players will take turns wandering the world, far and wide, and trying to get into the mystical places where they can have amazing adventures. Along the way, they might be thrown overboard by greedy ship captains, be hunted by brigands, romance the sultan’s wife or zoom around on magic rugs. All these wild adventures are guided by the enormous tome full of numbered entries and a matrix that tells you where to turn if, for example, you discover an angry efreeti in the desert and decide to punch him in the face.

Your characters will learn skills as they progress, and they may also pick up a variety of unpleasant statuses, a little like the way lots of late-night partying can get you a decent array of social diseases. You might wind up hunted, imprisoned, insane and wounded – and if you’re really lucky, you can get a magical sex change and have to spend the last half of the game trying to get your bait and tackle back where it belongs. Different effects have different cures – you may have to let the bandits catch up to you, or you might have to trick a servant into giving you a key. You might have to complete a pilgrimage to Mecca, or bring back a treasure for the vizier. Unfortunately, you don’t have a whole lot of control over these events, and may wind up losing your loved ones to a plague of gout, for which you are cursed to be really depressed. The only cure for that is to eat a gallon of ice cream and sit on the coach in your pajamas for a week watching reruns of Matlock.

The nice thing about all this unhappiness is that nearly anything that happens gives you either story points or destiny points, and since the goal of the game is to have amazing stories and great adventures, even bad stuff can help you win. You might wind up transformed into a jackass, but man, does that make for a good story. Get back to Baghdad with a whole bunch of amazing tales, and you’ll be the winner, even if you did spend a couple years lost in Europe while a rhinoceros chased you and fire demons stole your pants.

As wildly random and unpredictable as Tales of the Arabian Nights might be, it’s also a stupid amount of fun. You’ll laugh as Aladdin gets turned into a woman, carried away by a giant bird, haunted by a sad ghost and fed to a giant fish. You’ll chortle with glee when Ali Baba becomes cursed, diseased, grief-stricken and crazy, and then still ends up marrying the vizier’s daughter and ultimately becoming sultan. The pieces are absolutely beautiful, the illustrations are amazing, and the story is just as convoluted and random as the original Arabian Nights.

The story book is an amazing piece of work. It’s staggering to imagine the amount of effort that went into making it so that you found monkeys in the jungle, beggars in the city and magical islands at sea. It’s fascinating to see how your choices, environments and plain-old Lady Luck can present every visitor to the same space with a different adventure. It’s not perfect, or anything – a couple times I wound up having ocean encounters while I was in the middle of a Saudi Arabian desert – but considering the enormity of the task that confronted the writers, it’s more than understandable.

I wouldn’t say that Tales of the Arabian Nights is a clever, well-designed tactical game with great strategy. If I did, I would be a liar. This is not Puerto Rico. I would say that it’s a marvelous way to spend an evening with your family. You don’t play Tales of the Arabian Nights because you want the mental challenge. You play because you want to experience the story, which makes it a little like D&D, but without the armed robbery.

Cons:
Random as a Terry Gilliam movie
A few errors in the guide book

Dogstar Games carries Tales of the Arabian Nights, so if you're in the mood for a game that's all about telling a story, you should hop right over there and pick it up. Shipping is free, and the game is discounted to boot, so you can save some scratch and have a great night with the family. You'll be a hero!
http://www.dogstargames.com/product/ZMG7031
Posted by Matt Drake at 5:11 PM

Thanks Matt, glad (and relieved) to read you liked this baby because I worked my arse off on it for a year - and my job was just the graphic design! I visit this blog all the time and enjoy your reviews a lot. Cheers!

This game is one of my most consistent sellers. It just sells consistently, which is a great sign. You see some games have a spike, where they sell well at first, then fade, but this has just kept going. I personally haven't played it yet, but get good reviews from all my customers who buy it, so the game is truly solid!

No wonder it's so pretty! UniversalHead, we should start an official Mutual Admiration Society - I've been a fan for a long time.