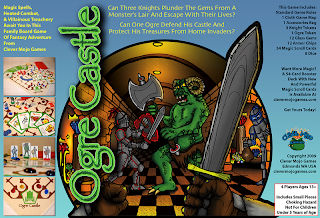 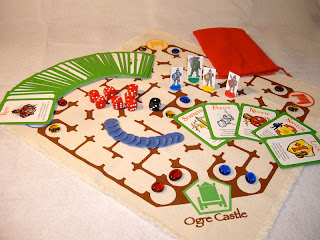 I don't make any bones about the fact that I like small press games. I'm not going to lie and say I like a game just because it's from a micropublisher, but I'm willing to cut them a little slack if the art isn't a modern classic or the rules are a little confusing because they're laid out by the pizza delivery guy. And in the case of Ogre Castle, I'm applying a little of that small-press-blind-spot. I'm admitting that up front, just so there's no confusion.

I really don't have to use much of a blind spot, in all fairness. Ogre Castle is a well-designed game, with more charm than Cary Grant. The art might be simplistic, but it's damned cute, and the rules are really easy to follow. If I'm overlooking anything, it's that the art isn't all that professional, and the game uses some components that lean a little toward the cheap side.

However, I don't think I would like a version of Ogre Castle that had all the bells and whistles Fantasy Flight would slap on it. The art may be a little rough around the edges, but it's a hell of a lot of fun, and it all fits the game perfectly. The player pawns are printed cardboard stuck into one of those little plastic stands that you find in games that can't afford to make plastic figures, and the armor tokens are little plastic yellow poker chips. But the art on the pawns is all different, which is great, and the art on the cards does a perfect job of telling you what it's for.

The premise of the game is that three knights are invading the ogre's castle to grab treasure and run for the door. But just because they're all knights doesn't mean these guys are on the same team - a knight only wins when he grabs all four of his treasures and gets out of the castle, and he loses if another knight beats him to it, so there's enough cutthroat action here to make little girls break down and cry (which means, Dad, that you may want to consider throwing the game if you're playing with an third-grader).

The fourth player in this battle is the ogre himself. He's got to beat the piss out of the knights, steal back his treasures, and then retreat to his throne room to count his money and let the knights rampage around his castle.

The map of the castle is printed on a fantastic cloth mat. There are twisty paths to get everywhere, which can make it really hard for a knight to get away when the ogre comes to punch him in the eye and steal his lunch money. Happily, the knights can cheat.

The game comes with a deck of cards full of nasty tricks that you can play on your opponents. You can make them get weak right before a fight, or you can steal their treasures and make them run all the way across the map again, or you can send them running the wrong direction. Most of the thinking part of Ogre Castle involves using your cards properly, and maybe foregoing an opportunity to grab a treasure for the chance to get another card. These aren't game-breaker cards, but they're so useful that you'll probably never hold more than four or five - and sometimes you won't have any, especially if that rotten blue knight plays the card that lights them all on fire.

As the game goes on and treasures get cleared out, the abuse you heap on your fellow players escalates from a Cold War sabotage situation to full-out global thermonuclear war. Once the knights start filling up their pockets, the other players will start to single out that one leader, which gives the other players a chance to catch up. We had a clear winner for the last third of the game - and she didn't win, because the ogre gave her a swirly, stole her treasure, and teleported back home.

This is a seriously fun game. It's a little chaotic and a lot random, and planning won't always help you a whole lot, but there's still a fair amount of thinking to do and a few tough decisions. Part of the reason it's so fun is the brilliant visual design. The illustration may not be Picasso, but the graphic design is genius. It's clean and simple and easy to read, and means that any player old enough to read the cards should be able to play the game. It's kind of funny - the game is thoroughly accessible to a younger kid, but the label says it's for teenagers. I suspect that's because if they said eight-year-olds could enjoy it, some hillbilly dumb-ass who never taught his kid to keep stuff out of his mouth would end up filing a lawsuit when their stupid spawn inhaled a poker chip and managed to be removed from the shallow end of the genetic pool. So I'll say what they legally can't - assuming you're not raising a mental midget with no motor control or common sense, Ogre Castle is great for elementary-school-age kids.

There's a catch, though - it's a game for four players. It's sort of like that Monty Python bit with the holy hand grenade and the counting - 'you must not count to two, except that you continue on to three, and five is right out.' You can't play with more or less than four, and since I can't always put together four people for a game, that kind of sucks. It's light and action-packed, but if you can only get three of you in one place, you'll have to play something else. I don't guess the game would work with a different number, but it's still kind of a limiting factor when it comes to hitting the table. So you better hope you've got 2.4 kids, so that you can send that .4 kid off to bed and play with the other two and your wife.

If you can slap together a group of four gamers, though, Ogre Castle is a light-hearted brawl-fest that's fun for the whole family. It's wonderfully endearing and quick, easy fun, with a hearty helping of backstabbing. I could easily see Ogre Castle coming out of Ravensberger, but it wouldn't be anywhere near as charming, so I am just going to go ahead and be glad I have my cloth board and cartoony art.

Pros:
Light-hearted, fast and furious
Fun for the whole family - as long as they remember it's just a game

Cons:
Not incredibly professional, but more charming because of it

If you're looking for a small press game to enjoy with your kids, go here and get Ogre Castle:
http://www.ogrecastle.com/
Posted by Matt Drake at 8:19 PM

Hi there, inteligent review as allways, which i thank you for.
By the way - a word about the game from bgg -

"Contrary to what it says above, Ogre Castle CAN be played with 3 players. Just make these adjustments...
(1) There will be two Knights and one Ogre.
(2) The Ogre places only the gems matching the Knight colors.
(3) Give the two Knights 4 armor chips each at the start of the game.
(4) Adjust the Ogre's goal to getting 4 gems of any color.
(5) The player who begins a battle draws a magic scroll card when they move away from the battle.

had me laughing as always, great review

Matt...Thanks for the fun review. I love the Monty Python & The Holy Grail bit...took me back to my college days. Sounds like you enjoyed the game and that's the best review of all.