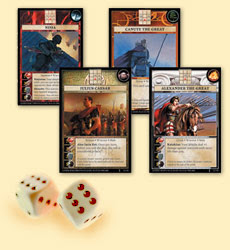 My wife and I run on parallel, non-intersecting paths when it comes to games. She'll play Fable, I'll play Halo. She wants to play Whist, and I want to play Risk. I like Piña Coladas, she likes getting stuck in the rain. She plays games, and I play games, but we don't enjoy the same kinds of games. (For the record, I actually really love Fable, but she hates Halo.)

So one night we sat down and started talking about the kinds of games we could both enjoy. I like some tactical maneuvering and long-term strategy. She likes fast turns. I like some pre-planning, and she hates deck-building. So I started looking for games that we could finish in 15 minutes or less, with fast turns for her and some tactics for me. We needed something - playing games is my second favorite thing to do with my wife, and with the kids staying up later all the time, it can be hard to find time for our favorite mutual pastime.

We found several games that we both wanted to play (and that wouldn't scar our children for life if we got caught playing). My personal pick of the batch was Anachronism.

Anachronism asks that age-old burning question: If Joan of Arc was wearing Daniel Boone's coonskin cap, and Genghis Khan was using Beowulf's shield, and they fought, who would win? And then, in a fast and exciting game that's over in five minutes, Anachronism lets you find the answer.

Anachronism is about half card game and half miniatures game. Except that your 'deck' is only five cards, and your 'miniature' is one of those five cards. The entire play area is four squares wide and four squares deep. So while there are elements of both card and miniatures games, Anachronism is really more like a board game - except there's no real board, just a playmat. I hope that's not too confusing, because it puzzled the hell out of me when I first got it.

To start off a game of Anachronism, you pick your four cards and lay them face down in whatever order you plan on revealing them. Then you each put your character card on the play mat, and start playing.

Each character typically gets three or four actions. An action will let you move one space, turn, attack, or use one of your character's actions (if he or she has any). So it could take you two or three actions to get into position, especially because every character has blind spots where he can't attack. If you're standing directly in front of Ramses II, he can't hit you. But then, he can always just slide one space to the right or left, and then he can whack the piss out of you.

Each support card has a weapon, armor, inspiration or special ability. For instance, Beowulf has Sverd (a weapon), Skjold (a special), Grendel (an inspiration) and Byrnies (armor). At the start of each turn, both characters reveal the next support card in line. You can't use a card until it's revealed, and many cards only take affect for the turn they're revealed. Carefully choosing when and where to strike and defend is key to winning - if you wait to reveal your armor, you could take a beating before you can bring it out, but if you don't get your sword out fast, you lose all those lovely attack bonuses.

Combat is easy - each player rolls two dice, and high roll wins. Of course, that's not all - you can make a basic attack with a low roll, but not from very many positions. You could make a weapon attack if you've got one, which will add to your roll and offer more flexibility, but you only get one weapon attack per turn. Since the game is only four turns, you kind of want to take your attacks when you can, and not spend the game running around the board.

Anachronism takes like five minutes to play, start to finish. If you don't mix up your characters, and just do a straight Sun Tzu versus Paris of Troy battle, you don't have to spend any time making a deck. You just jump right into the game, lay out your cards, and away you go. Entire tournaments could be played out in an hour. There are even multiplayer rules, in case you can arrange for more than two people to play at the same time.

If you're a graphics whore like me, Anachronism should top your list. These cards are easily the best-looking cards in gaming, hands-down. Holofoils, matte varnishes, amazing illustrations and metallic ink make every single Anachronism card a work of art. They're simply amazing.

There are hundreds of different warriors from dozens of different cultures available for Anachronism. Vlad Tepes, anyone? Yes, thank you, I think I will. Chick pirates? I'll have another. How about Jim Bowie, Samson (from the Bible!), Ivan the Terrible and William Wallace? If you're not hooked yet, you're either immune to historical awesome or you're not reading this.

And the best news? My wife likes Anachronism. She's looking forward to trying out Joan of Arc. Of course, as soon as the kids are both in college, we'll probably never play games again unless they include poorly-produced DVDs and flavored oils. Until that happens, though, we've got ourselves a game.

Cons:
Can't think of one. And I'm trying.

I love Anachronism. I need to go pick up the rest of the cards I don't own. So do you:
http://www.trikinggames.com/HTML_ENG/products.html
Posted by Matt Drake at 1:36 PM

You got me sold already, I am looking for this one for sure. Another solid review - no down sides that rocks.

5 minute games, I may even get the wife to play this one - which would be way to cool.

I can't wait to see the art work.

Is there any expansions in the future for the game?