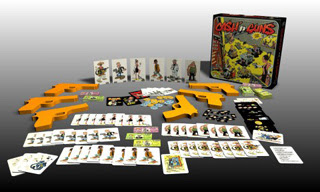 Let's pretend you're having a little get-together. You've invited several of your friends to come over and play some games, and you need a good game with easy rules that you can jump right in and enjoy. Let's further pretend that all your friends are misanthropic violence junkies who love nothing better than pointing guns at each other (in other words, they're Americans).

The premise behind Ca$h 'n Gun$ is that everyone is a fellow crook meeting up at the warehouse for the split after a big heist. But since crooks are greedy bastards, nobody's letting the split go down fair - guns mean power, power means money, and dead crooks mean more for everybody left alive. Until, that is, the survivors get shot, too.

Every player gets a foam gun and eight cards. These eight cards show three results - Bang!, Bang! Bang! Bang! and Click! (yes, they all have exclamations. These are very emphatic cards.) You pick a card in secret, count to three out loud, and everyone points guns at the same time.

And now it gets hot, because there's a pile of cash in the middle of the table, and you can't get it if you chicken out now. You can't get shot if you dive for cover, but then you can't get your share of the loot, either. You're not chicken, are you? Because there are two kinds of players in Ca$h 'n Gun$ - the rich and the scared. Oh, and the dead. So there are three kinds of players - rich, scared, and dead. Or unlucky. Which I guess makes four. There is no fifth thing (hey, if it's funny for Monty Python, it's funny for me).

If you've got a bunch of guns pointed at you, it might be wise to grab some cover and wait for a later round. But then, if those guns are all empty (because the cards you can't see say 'Click!' instead of 'Bang!'), then you can laugh at them and stick around for your cut. And even if one of them has a Bang! card, you might have a Bang! Bang! Bang!, which would go first, wound your opponent and make him drop his gun. Heck, if he's already shot twice, it'll kill him. So you have to ask yourself - do you feel lucky?

Once everyone has a chance to hide, cards are revealed. Bang! cards wound players and make them drop out of the round, and if you get shot three times, you're dead (and in case it's unclear, that means you can't have any money). Then every player still standing splits the loot on the table. Then more loot hits the table, the scaredy cats from last turn come out from behind their mom's apron, and you start it all over. You do that eight times, and then the player with the most cash wins, unless he's dead or has everyone laughing at him for spending too much time hiding under the table.

You can play Ca$h 'n Gun$ with up to six players if you just have one box, but for a really chaotic good time, try mixing in another box and finding a dozen gangsters to threaten each other. The game scales up, and a large crowd makes it way more exciting.

One thing to understand about Ca$h 'n Gun$ is that there is very little skill. In fact, when we play any more, most of us just shuffle our cards so we don't even know if our guns are loaded. There is some very shallow strategy, but it doesn't really matter. Because let's face it, you're Americans, and you want to point guns at each other and steal wads of cash. The name of this game is a perfect example of truth in advertising.

If you play several games with the same group, you can expand it. There are more cards in the box for stuff like special powers and secret identities. You can play a game where one character is an undercover cop, and at some point he calls the police, and then just has to survive until the end of the game. Or you can play with super powers, where you can steal guns from dead people or wait to point your gun until you see what everyone else is doing.

Any time I go to a game night where we're going to have more than four people, someone brings Ca$h 'n Gun$. I've played the game with upwards of 20 people (though not all at the same time), and I've only ever known one person who didn't like it. When a game can woo 95% of everyone who ever plays it, that's a success where I come from (I come from America, which explains why I love the game so much - we get to point guns at each other and steal cash).

Ca$h 'n Gun$ is outstanding. If you play with crowds on anything resembling a regular basis, you should make sure someone in your group has it. Get it here:
http://www.asmodee-us.com/games/party-games/cash-n-guns.php
Posted by Matt Drake at 12:05 AM

Great write up - i can see this being a lot of fun, and it sounds like you could get non-gamers to play it very easily.

It even has advanced rules which is great if you play it a lot.

So do you ever play with the advanced rules, or is it more fun with the basic rules? And have you tried the Yakuzas expansion yet?