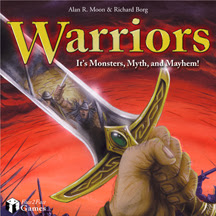 In my continued search for games my wife will play with me, and that I want to play, and that we can enjoy with our clothes on, we bought a game called Warriors. This was a year or so ago that we bought this game, and we have played it off and on since then. I would be a disgusting liar if I said that I look forward to every game, but like many other games I play, it does have a distinct advantage in that the rest of my family doesn't leave the room when I bring it up. I wish to God I could say the same about Last Night on Earth.

Right from the outset, Warriors looks like a big winner. It's designed by Alan Moon and Richard Borg. If you're not that educated about board games, that might not mean anything to you, but if you follow big-shot game designers, that should get your attention. Alan Moon has been making games since the 90s - you may have heard of a little game called Ticket to Ride that has done fairly well. And Richard Borg should be a gaming household name, because even if you throw out Memoir '44 and Battlelore, he's got a game designing resume longer than your arm.

The theme of Warriors should be a pretty big draw, too. It's this thing where each player is commanding armies from up to six different races, and sending those armies to battle armies controlled by opponents. Elves battle trolls, undead battle barbarians, dwarves battle goblins - it's an old-school fantasy yard stomping. Add in wizards and catapults and you can see how the theme might seem pretty cool.

Each player gets a bunch of cards, and each card represents a member of one of those six races I mentioned. There are infantry, cavalry and archers for every race, including the undead, who ride some really skinny horses. You might also get some a wizard or two, or maybe a few catapults. You organize your forces and get ready to march to war at the head of several different armies.

Then you get your play hand, which will include some reinforcements and hopefully some attack cards. You need attack cards to get aggressive, because without them, you can't attack. Probably why they call them that. Then you send one of your armies off to fight an opponent's army.

You roll dice to determine who wins. The attacker gets one die for every infantry card, up to three, and the defender can roll up to two dice. You use archers for a slight advantage (to add to your die rolls) and cavalry to fight someone else after you finish the first fight. Every card you kill gets added to your score, and every card you lose goes to your opponent. Catapults can be used any time to take out any cards, anywhere, and wizards protect your armies at the cost of not letting them fight.

There's obviously more in the rules, but the idea here is to tell you if the game is fun, not put you to sleep. Unless it's past your bedtime, in which case you should either drink some Nyquil or maybe go look up a review at BGG. I'm here to educate and entertain - not necessarily in that order.

The trick to Warriors is in choosing the right battles and keeping the right cards. The dice can be capricious, and you can't win if you never attack anyone. Your opponents are certainly not going to hit your toughest guys - they're going to come after your pathetic one-card armies with their archers and stuff and mow them down like wheat, so you have to take the offensive and do unto others before they do it to you. Which means you need reinforcements to beef up that attacking army, and you need attack cards to start fights, and if you pull a catapult you better add that, but will you really need that wizard?

There are several tricky decisions to make, which makes Warriors a fairly cool game. Unfortunately, the game comes back around and bites itself firmly in the ass, leaving some ugly bruises that can be tough to explain in the emergency room.

The reason Warriors doesn't hit my table every weekend is because there's way too much luck. If you pull a crappy hand, it doesn't matter how good you are, you're screwed. And I've seen rounds where nobody has any attack cards. It's kind of sorry when you go, 'so nobody has any attack cards? OK, I guess the game's over.' A little anti-climactic to go right from round two to counting up scores.

But then, it is a fun game. The art is amazing - good enough that I had to go look up the illustrator (http://www.paulprofherbert.com, in case you're interested). The rules make it play really fast, and while there are some meaningful decisions, they're not tough enough to make you shut down for half an hour while you debate your next move. It's light, it's fun, and it's pretty. Come to think of it, maybe the reason I like this game is because it reminds me of my high school prom date.

Which gives me an idea for another game to play with my wife.

Cons:
Waaaay too much luck
Not quite enough depth to pull me back in for game after game

If you want an easy game that's somewhere between filler and deep thoughts, break off twenty bucks and go here:
http://www.face2facegames.com/index.cfm?fuseaction=catalog.detail&productID=10
Posted by Matt Drake at 11:07 PM

It has to have some value if the family will play it. Sucks the family won't play LNOE, though.

Sounds like a winner to me, it also sound like my prom date - but we just spent the $ on a hotel room and a keg and had a party and skipped the whole dance - good times I tell you.

How long does a game take?

Sounds like something I may try and get down the road!

You can play a game of Warriors in a half hour. We usually finish in far less time than that.