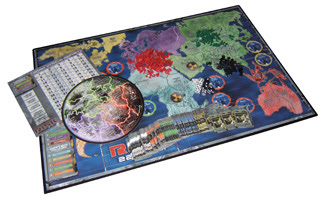 Is anyone else out there a fan of 'All Your Base'? You know, that stupid little intro from Zero Wing where the bad guy drops into the ship and tells them he's winning the war? Because when I play Risk 2210, I pretty much spend the whole time thinking, 'that's right, take off every zig for great justice, bitches.'

You start with Risk. You have a bunch of little armies that are trying to take over the world, and you roll a bunch of dice a bunch of times. Now, in old Risk, you had one guy who turtled up in Australia and just loaded up on guys, and then you had one guy who swept all over, grabbing land and leaving just one army at a time behind them. Then you had the one guy who never had a real plan and ended up leaving key areas unprotected so that the rest of you were dismayed as the really aggressive guy won because of the dork who wouldn't pay attention. And whether or not you had all those guys, you were still up until four in the morning even after everybody knew who had won, because that one guy's 72-unit invading army had taken out everything except that last 24-unit defending spot, and that loser was rolling one die at a time because he won ties.

So that was then, and this is now.

Now you've got the same guys, but there's no way the game is going to take as long. For one thing, the game is over after five turns, so you can all get to bed before your beer buzz wears off. For another, now you can fight on the moon with little robots and space commanders, and now you have cards that let you set somebody up the bomb.

In my old man's box of Risk, all the armies were little wooden cubes. Not that representative, really. My box of Risk 2210, on the other hand, is full of little robots called MODs. These are not 60s hipsters, though, they are Machines of Destruction, so named because their opponents find themselves on the way to destruction.

Risk 2210 also has a bunch of cards. There are five different kinds of cards, matching up with the five kinds of commanders each player can summon into play. You get energy tokens every turn, and you can spend them to hire these commanders, play cards, draw cards, or build bases that may or may not belong to us.

Commanders are awesome, and really make the game. If you just plain need to win a spot, throw the nuke commander into the battle and watch him clean house with his eight-sided combat die. All of the commanders let you draw cards and play them, as long as you've got the right commander in play. Like you can't launch nuclear missiles without the nuke commander, and you can't settle the moon without the space commander. Your diplomatic commander will help you win the game, because he know what he doing. He get signal.

A great feature to Risk 2210 is that you can no longer hide in Australia. Thanks to the advent of undersea colonies, you can send your sea commander into battle to secure a string of locations that lead right up Australia's ass. The turtle guy who spent his whole game hiding can't cover up one spot and hope to hide behind it the whole game. If he just sits there, he has no chance to survive. Make his time.

Luck is still present in Risk 2210, perhaps more so than with old Risk. The introduction of cards that let you drop nuclear warheads on random places around the globe, or launch rocket attacks, or just kick up a few extra points at the end of the game, all tend to lead to a little more luck than the old-school strategy. A fair amount of maneuvering is still required, but it's not as much as it used to be. You don't sit there planning these long runs across the board, hoping to kill someone and steal their cards and turn them in for another 20 armies on the spot. Instead you fight a few battles, then go, 'How are you gentlemen!' and it's the next guy's turn.

I can't find anything to complain about with Risk 2210. I like it a lot more than old-school Risk, and even more than Godstorm, which used the same theory but didn't let you have enough resources to take advantage of all the extra stuff. Some fans of old-school Risk may be ready to yell,'what you say?!', but I don't care. 2210 is more fun.

The only real downside is that Risk 2210 was made by Avalon Hill after Wizards got it. And then Wizards ran it into the ground and left it on life support, cranking out the odd Axis & Allies game now and then and leaving us wondering what happened to all the great games they were making for a while. I'm not a Wizards basher by any stretch of the imagination - I think they're a very fan-friendly company that usually gets it right - but I am saddened because Avalon Hill has pretty much quit making anything I like.

It makes me want to turn on some really high-energy music, jump into my spunky little fighter zig, and shoot stuff in a little side-scrolling tunnel, all the while yelling, 'For great justice!'

Pros:
Turn limit means you're not playing for eight hours
Cards, commanders, undersea colonies, and the moon
So much more fun
It has bases, so whenever you grab your opponent's last base, you can drop a horribly over-used Internet joke

Cons:
A bit more luck than the old one

Great Review as always, I have always read this is the best Risk out so far, and your review makes me think the same, I am adding that to my wish list at BGG, gotta get that one. I have LOTR Risk, but sad to say I have not played it......

So when do we get COntest winner results and find out how many people signed up????????

Have you thought of doing Gamma World?

I shall review this review.

Brilliant. Genius. Way to take a meme and run with it!

Pros: Loved it.
Made Coke squirt out my nose.
My nostrils are now clean.

Cons: I need to clean my keyboard and monitor now.
It was a new monitor.
Screw the keyboard.