Board Game Review - Age of Gods 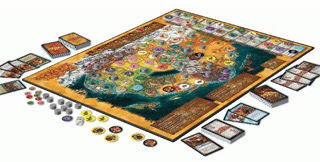 If I were a god, I would be the God of Ass-Woopin'. I would even spell it with an apostrophe, and make my followers cuss a lot while they kicked people in the head. Chuck Norris would be my prophet, and he would spread the message of ass-woopin' to all the people of the world, one round-house kick to the face at a time.

Unfortunately, the new Asmodee game Age of Gods does not include a God of Ass-woopin'. There's a God of War, but he's really just into fighting more than face kicking and profanity. There's a Goddess of Vengeance, but she doesn't really fight, she just takes your plasma screen and chucks it out a third-story window into the roof of your Miata. There's a God of Death, but all he does is mope around in eyeliner and complain about how everything is so pointless.

So the bad news right out of the gate - no God of Ass-Woopin'. But you do at least get to be a god. You can't just grab the one you want, but you get to choose between one of two, so you can make sure you don't get stuck as the Goddess of Peace and have to drive around in a VW Bug and listen to the Eagles.

Once you choose up your gods, all the players start meddling in the affairs of mortals, to try and guide this or that specific race to their destiny as rulers of the world. Now, you're not controlling those races, you're just pushing them a little. So when the giants stomp a mudhole in the goblins, they can say, 'the God of Bad Teeth made me do it.' Except that there's also no God of Bad Teeth.

The map of the world has a bunch of territories, and each is controlled by one of 26 different races. Some races are more powerful than others - orcs start off with four spaces, and fairies only get one. And if a race loses its last territory, it's extinct. I'm pretty sure this is based off what happened to the dinosaurs - the lemurs may have started small, but they managed to knock the thunder lizards out of their last territory, and there were no necromancers to bring them back. And if Jurassic Park has taught us nothing else, we at least know that it was lucky for us that the lemurs won.

Every turn has four phases. The destiny phase has each god either randomly picking a new race to push around or making one of the undeclared races pick a fight. I think gods think that's funny, making guys fight for no reason. Apparently the God of Inappropriate Practical Jokes likes to instigate dust-ups between people for no real reason.

In the fortify phase, each god can tell the people living in a territory to build a fort. Forts make it harder to whack the people living in the space with a fort. It's kind of a courtesy nod that the gods give to their followers, sort of like when the Goddess of Mom makes you wear a coat to school because it's too cold, even though all the cool kids are wearing short sleeves. But the Goddess of Mom will just ask if you would follow your friends off a cliff, remind you to wear your hat, and tell you that you'll die of pneumonia.

Then gods start fights. This phase just has every god telling one group on the board to fight with another group. You can even make people start fights who aren't your followers. You might do this to control the growth of another god's nations, or just to act like the God of Being a Dick. If those people you choose win, they kick out the people who were in one territory and expand there.

Finally, you get to do special stuff. You play action cards that let you do things like teach your goblins how to use guns, or make the giants use guerrilla tactics, or make the sorcerers migrate to an empty territory. This is tricky because you get a limited number of action cards, though you do get to know what they all are when the game starts, except for a few questionable possibilities down the road.

When the game ends, all the gods have to reveal who their followers are, then add up all the territories controlled by their followers. The winner is the god whose followers did the best.

Now, throughout the whole game, each god gets to use special powers. Like the God of Luck can reroll the dice all the time, and the God of Protection can build extra forts, in addition to his ability to make sure his followers are all using condoms. The God of Trickery will let you conceal your actions, though you have to be careful, or he'll sell you a really crappy used car.

Age of Gods has a lot of different elements working. There's the world conquest angle that reminds you of Risk, and there's the limited action thing that reminds you of a lot of Euro games. There's a little bluffing, and a whole damned lot of planning ahead. There's a good bit of luck, but it's not a game-breaker. There are tons of opportunities to make huge mistakes or really blow it, but with a fair amount of planning and a little luck, nobody really knows who's winning until the game ends and everyone reveals who they've been building up.

The art in Age of Gods is pretty damned good, but for some reason there are tons of little cardboard circles with art that looks like it was done by a webcomic artist in Illustrator. There are these amazing paintings on the cards, and there are these horrible little pictures on the discs. If it was up to me, the little discs would have been replaced by little plastic figures molded in a lot of different colors, but I tend to think that would have made the game a lot more expensive. A lot cooler, but a lot more expensive.

Now, I'm still not too happy about not being able to be the God of Ass-Woopin', Beer Drinking or Getting Laid, but I have to tell you, this is one of the best new games I've played since GenCon. Lots of people will disagree, but the only really new games that I think are better than Age of Gods are Last Night on Earth and Battue. I shake my head at the decision to uglify the race markers, but for sheer joy of gameplay, I have to give Age of Gods the highest marks I can muster, even if I'm not allowed to be the God of Hard Liquor and Cheap Women.

Pros:
Great art on lots of the game
Killer gameplay combines the best of Ameritrash and Euros
Amazing theme plays out wonderfully

Cons:
For some odd reason, really bland race markers
No God of Ass-Woopin'

As always, I encourage you to read other reviews and see if this sounds like your cup of tea, but if it does, go get it here:
http://www.asmodee-us.com/games/strategy/age-of-gods.php
Posted by Matt Drake at 7:23 PM

Thanks for the info on this! Hadn't heard of Age of Gods until your writeup. I'll be doing some more research and certainly keep it on my radar.

Mate - that was a fantastic review. The game sounds great but I also just loved your style or writing...the God of Wit and Upturned Mouths smiles on you I think.