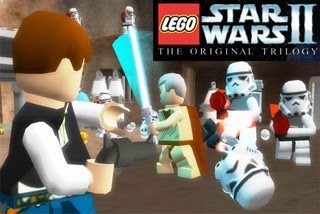 Through the annals of time, there have been some really dumb concepts. Walnuts in ice cream. Hydrogen zeppelins. Crocheted underwear. Feeding dead cows to the live ones. Watermelon on quesadillas. So maybe in comparison, a Star Wars video game using LEGO blocks is not as bad as it sounds.

Star Wars, of course, is ten pounds of awesome in a five pound bag. If you disagree, don't tell me about it. Just shut up, because you're wrong. Star Wars is the cat's pajamas.

And LEGO Star Wars is also a fantastic idea. Take what is arguably the greatest science fiction series ever made and let us build all the ships, bars, forests and walking vehicles. This is also a magnificent idea, and should not be at all compared to the ET game for the Atari.

But a Star Wars video game with LEGO versions of everything? Why would that make sense to someone? Who was the video game executive who signed off on this? Jedi Academy - that makes sense. Dark Forces - excellent. Battlefront - wicked awesome. Rogue Squadron - yes, thanks, I'll have another. But LEGO blocks? Why tell the coolest sci-fi story ever using digital interpretations of toys that are really only fun if you can actually play with them?

But that's what they went and did, and apparently it was such a big seller, they made a second one. And then they made a third one to put in even more stuff. Now we're approaching a level of absurdity previously reserved for Guitar Hero (honestly, I've tried it, and it's one of the stupidest games I've ever played).

Now, for me to be reviewing LEGO Star Wars II, I have to have played it. I won't review games if I don't try them. And in the case of video games, I have to play them a lot, or I can't say whether the game is really any good. If you only ever play one level of Duke Nukem, there's no way you could say if it's a top-to-bottom keeper. So I've played LEGO Star Wars II... and I confess to loving the hell out of it.

There are a bazillion reasons LEGO Star Wars II is incredibly awesome. For starters, it's only the original trilogy. No Jar-Jar, no Hayden Christiansen, no goofy diners and convoluted plotlines. Just Luke and Leia and Han and Darth Vader and Boba Fett and a galactic civil war. It's the best half of the best sci-fi ever made.

Plus the game doesn't take itself seriously at all. They know they've got perfectly cylindrical heads and round claw hands, and they don't care. When Vader force chokes someone they literally fall to pieces with a plastic-on-plastic clattering sound. The cut-scenes are hilarious - when Ben Kenobi gives Luke a light saber, Luke accidentally chops off C3PO's head, and when Vader reveals to Luke that they're related, he whips out a family photo.

And best of all, LEGO Star Wars actually lets you play with LEGOs. You can take Boba-Fett's head, put it on Han Solo's body and give it slave Leia's legs (which are not nearly as hot when they're just boxes with holes in the back). And throughout all the levels, you'll run across piles of blocks, and you send your guy over and build stuff with them! For instance, to get out of Mos Eisley, C3PO, R2D2 and Obi-Wan have to work together to build an AT-ST out of spare parts. You'll open a door and find a bunch of leg pieces, then you build feet, then you build the chamber, and then Obi-Wan force-pushes the whole thing together and you jump in and blast the crap out of the hive of scum and villainy.

But just because it's funny and light doesn't mean there's no action. Obi-Wan can swing a lightsaber like nobody's business, and Boba Fett can fly around on his jet pack and blast stormtroopers by the dozen. Once you unlock a character, you can play him in free play mode, and so you can switch from Yoda to Chewbacca to a Gammorean guard without batting an eye. And different characters have different abilities - jawas can climb through little holes to retrieve hidden items, and bounty hunters can throw thermal detonators. And if you get shot too many times, you fall apart and all your collected LEGO studs (the game's currency) go bouncing all over the place.

There are so many things to collect and unlock in LEGO Star Wars II that finishing the story is just the first step to finishing the game. At one point, you can unlock an entire LEGO city and just wander around blowing stuff up and getting paid. And you'll want to do that, too, because Ghost Yoda is really expensive.

I would not have believed a game like LEGO Star Wars could be cool. That just seems like an idea as stupid as naked slip-n-slide (which only sounds like a good idea if A) you're drunk and B) you've never done it). But it is executed brilliantly, with fantastic graphics and great sound and awesome game play, and doesn't include that stillbirth of a prequel trilogy.

I guess now I'm going to have to try on a pair of Crocs.

Pros:
It's Star Wars, and it's the original trilogy
You get to play with LEGOs
Hours and hours of fun
Like a cross between an action game and a puzzle game

Cons:
Can get a little dull running through the Death Star for the fifth time trying to find that one missing piece so you can build a model of the Millenium Falcon
Posted by Matt Drake at 9:21 PM

My kids have Lego Star Wars on Gameboy. It is a lot better than it sounds. Great humor and good clean fun!

Anyone with a Game Boy Advance that's remotely interested in the Star Wars franchise will probably get a kick out of Lego Star Wars II: The Original Trilogy. Watching the three original Star Wars stories play out with characters and scenery composed of Lego bricks is a whimsical treat.