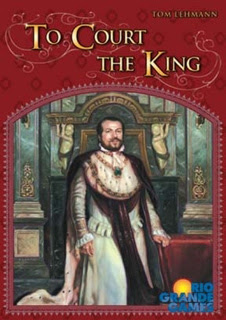 I'm still trying to ingratiate myself with the guys at Rio Grande, so I figured this was a good time to review one of my favorite Rio Grande imports - To Court the King. Hopefully the marketing guy over there will be like, 'wow! This guy really likes that game - I wonder if he'll like this other one?' Because let's face it, that's why I do this - free games. I can pretend like I'm gaming elite because I'm a board game journalist (like that's tough to pull off), or that I do this for the respect of my peers, but the truth is, I do this because I don't make enough money to buy all the games I want to play. Maybe I would make more money if I quit staying up late typing game reviews, but I choose to ignore that possibility.

For starters, I should point out that while To Court the King is not a Reiner game, that's just because it's not blood simple (or what the BGG guys call 'elegant'). The theme in this game is pointless. You could strip away the theme completely, leaving the game fully devoid of any connection to anything outside the game, and it would play exactly the same. There is no reason for this game to have a theme at all, outside of some stunning art and the fact that you can sell about twice as many games if you pretend there's a theme.

Normally I don't like games without themes, but To Court the King still hits my table almost once a month - more if I can arrange it - because the game play is completely fantastic. There's obviously an element of luck - it is a dice game, after all - but strategy and planning is the deciding factor in this game. And since the theme is tangential to the game, I think I will apply my own theme, just for this review.

There are two basic pieces to this game. The first, obviously, is dice. Players start off with three dice to roll, looking for doubles, high rolls, all odds or all evens. The goal of the game is to roll at least seven of the same thing. In case you're not paying attention (or in case you're really bad at math), that poses a problem, since you only roll three dice and have to get seven of a kind. If you get all seven, you get a chance to try for the win - an extremely intimate evening with Jessica Alba. Of course, the game is far less interesting, and just calls it 'courting the king.' Yeah, like there's a nerd who's seen Fantastic Four and would rather be with a fat guy in a lacy frock.

So to make that big batch of dice a little easier to run down, there are the second batch of components - the cards. There are 20 character cards, representing everyone from Ann Coulter and Ed Asner to Shakira and Ozzie Osbourne, and they are all played face up in the middle of the table at the start of the game. Each card has a specific requirement to take it - you need all evens to get Tim Robbins, and you need four of a kind to get Ted Nugent. If you roll absolutely nothing, you can get Johnny Knoxville, or if you roll a six-die straight, you can get Keith Richards (and in case you're still not keeping up, you can't get a six-die straight with three dice. Pay attention!).

The point to getting cards is that each card lets you do something with your dice. Bill Gates lets you reroll dice. Jenna Bush lets you add +1 to any number of your dice. David Copperfield lets you change a die to whatever you want. But the best way to roll all those extra dice is to get the add-a-die helpers.

There are eight cards out of twenty that let you add a die to your pool. James Cromwell gives you one additional die to roll, and George C. Scott gives you two more, but there are six others who each give you an additional die in a specific value. In fact, if you've got all six of them, you can get that six-die straight without rolling any dice.

You can use each card you have once per turn, and every turn, you'll be getting another card, even if it's just Johnny Knoxville. But when you do get a card, you have to think carefully - do you need a card that lets you change a die, or one that lets you get an extra die? It's a tricky balancing act, because without the extra dice, it's not possible to roll as many as you need, but without the changers, it's all up to luck. To make matters worse, there are limited numbers of cards, so not everyone is going to be able to get Joaquin Phoenix, or Shirley MacLaine, or Jeremy Piven. You may want to grab a Bruce Willis when you can, even if you could have nabbed a Bono, because it might be the last one in the game.

There are two elements in To Court the King that make it all about skill over luck. First you've got the card-picking part. Choosing the right card can make all the difference - every card is an advantage, but is it the one you need? And then you've got the actual die rolling.

The part where you roll dice is incredibly entertaining. At first, it's not a big deal. You roll three dice, then two, then one, and take what you get. But by the end of the game, you're manipulating, sliding, plugging in dice, turning them and planning elaborate moves. When you've got nine or ten dice in front of you, and the ability to twist most of them just once, it's like solving a tricky puzzle. Good players just see the combinations, and bad ones don't. So the good players win.

So what if the theme could be swapped out for tree frogs, superheroes or over-the-counter cough medicines? You're not going to play this game to be dropped hip-deep in theme. You play this one for the mental puzzle and tricky strategic challenge it provides. If you want theme, you're in the wrong place, but if you like a great game that you can play with your kids and still finish inside an hour, To Court the King is an easy pick.

Now hopefully I can get a copy of Gloria Mundi.

Pros:
Tough decisions make good gameplay
Great components (the card art is gorgeous)
Every turn is like a tricky puzzle
Fun, easy to learn, and family-friendly

Cons:
Theme could be stripped out and replaced with names of condom brands