Board Game Review - Shadows Over Camelot 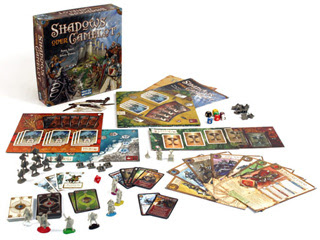 It's not often that I get to compare a game to prison rape, so I've been looking forward to reviewing Shadows Over Camelot. I'm not going to tell you not to buy the game. I'm just going to warn you to bring plenty of lubricant.

Shadows Over Camelot is an interesting game because, unlike most games, it's cooperative. Shadows Over Camelot has you trying like hell to prevent the fall of the Round Table. Players take on the roles of Sir Gawain, Sir Galahad, King Arthur and a bunch of other knights as they do their best to stop Camelot from being abused in the showers by the forces of evil.

Every turn, each player has to start off by doing something that hurts Camelot, and then something that helps it. Hurting Camelot can be one of three things - put a siege engine around the castle, play a black card to further the progress of evil, or just take it in the shorts and get wounded. The good things tend to be a little harder to pull off - you play white cards to save Excalibur, stave off the Picts, find the Holy Grail, beat up Lancelot and otherwise keep from wearing a dress. Even moving takes a turn, so by the time you move to a place and do something, the bad guys have been able to go like a dozen times. The game is designed to kick you in the teeth right from the outset.

To make matters worse, one of you is a traitor. One of the knights is operating in secrecy, telling the worst bad guys when you take naps and bribing the guards to make sure you work in the laundry. He's doing all the same bad stuff and good stuff, but he's actively working to make sure Camelot falls. At some point he might be revealed, but usually that happens once he's won the game. He's like that friend who sits next to you at every meal and then shivs you for your cookies.

You fight the forces of evil by completing quests. Every quest you complete gets you white swords sitting on the Round Table, and every quest the bad guys win gets you a black sword. The best case scenario is that the game ends when the Round Table is full of swords, and more of them are white than black. The worst case is that the castle is surrounded by siege engines and the Saxons corner you behind the tool shed when everyone else is in the yard.

In case the heavy-handed metaphor is lost on you, Shadows Over Camelot is one hard damned game to win. It's ridiculously frustrating, and for some players is an exercise in futility. Last time I played it, most of us wound up ready to pitch it out a window. It's incredibly frustrating to be parked at the Grail quest, and every time you think you're making progress, the game slams you against a wall and steals your virginity.

It's not all bad, though. The game does have some fans, so it can't be completely worthless. I played this with my wife and kids, and we managed to squeak out a win. Of course, we didn't play with the traitor and we cheated a little besides, but it was nice to win, so we didn't care. After all, who wants to lose to a cardboard box?

This is a Days of Wonder game, so it's pretty as a pinup. You've got 40mm scale miniatures to represent each of the knights. You've got wonderfully illustrated game boards and cards. There are little plastic siege engines and miniature Picts and Saxons. It's like opening a box full of toys - until they beat you half to death and make it hard to sit down.

Shadows Over Camelot is widely considered a very bad game, but there are people who love it. It's so incredibly frustrating that only the most seasoned players tend to win very often, and even then they have to work together and have a razor-sharp strategy. Playing a game where you all end up walking funny is not my idea of a good time, but I have found a way to enjoy the game.

I cheat. And I never bend over to pick up the soap.

EDIT (1/17/08): In the interest of full disclosure, Shadows Over Camelot has a fairly decent rating at BGG, and as you can see from the comments below, it has a lot of fans. I still say it's really hard, and I know a whole lot of people who hate it. So there are two morals in this story - first, don't base your purchases on just one review, and second, some people actually enjoy prison sex.

Pros:
Interesting mechanics mean that everyone has to work together
It's very hard, but you can win if you're smart and a little lucky
The game looks mighty nice

Cons:
The game thinks you look pretty, too

Shadows Over Camelot is one hell of a hard game to win, but if you're into pain, you can get it here:
https://www.daysofwonder.com/en/buy/?family=SC
Posted by Matt Drake at 7:31 PM

While I don't think it is that bad of a game, it is very (with a Capital VARY) hard to win.

And of course, it is also very hard to spell "VERY" correctly.

I think the game needs to be hard to work. As a game that puts players strictly against the game system, if it's too easy there will be virtually no replay value. You need that challenge to keep people coming back for more. The difficulty also makes the role of the traitor work; if the game were too easy it'd be too difficult for the traitor to cover up or play off their moves.

It's the strive to success in the face of extremely adversity that makes the game fun. Sure you might be stuck working on the grail quest the entire game but it's often more important to not fail a quest than it is to complete it. It's very easy to see when you are contributing to the success of the group, and even when you sit in one spot you can help out in other ways (contribute Merlin cards, play special cards to help the group, watch others to figure out who the traitor is, etc.).

Ultimately I feel the game is more about the experience than it is about winning or losing. So long as you go in knowing the odds are extremely against you I think the game will be a lot of fun. I've been able to introduce this game to people who have never really played games before or who have shown no interest in them and they really, really enjoyed it. I love the game for that aspect alone. It's not a game you'll likely play in a more serious game group very often though.

So now everyone knows I'm not a liar - I said the game had fans, and here they are. Fans.

I kind of like it, but I don't ever plan on playing again if I'm not cheating.

I can understand why someone might not care for the game; it is pretty doom-and-gloom and the mechanics don't really fit the theme. I'm not not sure that saying "widely considered a very bad game" is really quite fair though... where is it widely considered to be bad? Most everyone I know thinks the game is great. It's ranked 100 at BGG so clearly they don't think it's bad either.

I'm just surprised the difficulty of the game is what turns you off, but to each their own :)

It doesn't sound like much fun to me - but then I have stayed out of prison for a really good reason ( I am a pretty white boy ).
Playing against a system that is against you, having a back stabber in the group - I have not use SIr Hawthorn in Scape for a reason ( I hate being stabbed in the backed or stuck with a chiv for my cookies.

It sure doesn't sound better then Heroscape and that is only rated in the 500 at BGG - so to me there whole rating system should be taken with a grain of Salt - but to each is own.

I would say it sounds like a great one to give out in the next contest ( ha ha ).

Thanks for a another great write up.

I am a happy camper today - Tannhauser, Descent, Politico, and Last Night on earth all get sent my way in the mail - just a steller day all around.

I'd rather slide naked down a giant razor blade than play the game again.

The one game I played I enjoyed. I don't have a burning desire to play again, but now that I have played, I do feel up to the challenge if I ever have to play again. ;-)

It sounds like you suck at the game, i have played twice, both games had 6 players and we played with the traitor and we won once and lost once, both games came down to the wire. Sounds like you need some good lincoln logs, mabey a good game of chutes and ladders is right up your ally. DONT BELIEVE THIS REVIEW THE GAME IS AMAZING!!