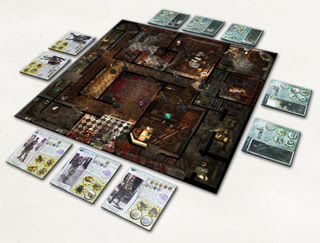 The marketing guy at Fantasy Flight has been really hard to reach since the middle of December. Last week, I had to actually break down and buy a game. Well, technically, my wife said I could buy Tannhäuser if I would recaulk the tub and replace the kitchen sink. And since I was going to have to replace the sink and caulk the tub anyway, I figured what the heck, I would get something out of it.

Tannhäuser is not an American game, but it sure does feel like it. It fits all the criteria for being American - it's ridiculously violent and has a ludicrous amount of luck. It has as much theme and backstory as something like Last Night on Earth or Descent, which is typical of an American game, but it's actually created by French people. And apparently, these French people are still a little sore about that last big war, because the Germans in Tannhäuser are real douchebags.

The story of Tannhäuser is that World War I never ended, because the Germans found some arcane artifacts and used them to make some of their troopers super-powered. Then the Allies (later known as the Union) found some artifacts at Area 57, and so they had some gnarly dudes, too. And then demons started corrupting Nazis, at which point one entire group of Reich troopers acquired demon taints. They probably should have washed more often (yes, that was a crude joke, and no, I won't explain it to you).

Tannhäuser is like many of my favorite games in that it is not so much a game as it is a box of toys with rules. There are ten pre-painted plastic miniatures and a beautifully-illustrated, double-sided game board. The art in the game is fantastic, like it had just jumped out of a really screwed-up comic book. There are apocalyptic demonic bodyguards, monstrous shock troopers, and lots of heroic good guys. And then, because I intend to bring this up as often as possible, there are the troopers with demon taints. The trooper in the game with the demon taint has one glowing red hand, probably from scratching his demon taint.

Tannhäuser uses a crazy movement and LOS scheme called the Pathfinder system. They called it that because there's a path, and you find it, and the guys that made the game are great at coming up with scary Nazis and cool stories, and completely unoriginal when it comes to naming what amounts to a bunch of well-placed colored circles. If your figure is on a red circle, he can see every other figure standing on a red circle, and if he's on a circle with half red and half green, he can see both red and green paths. Typically, that guy will be standing in a doorway or something, rather than having been ripped in half and placed on two different circles (probably by someone who was testy from having a very itchy demon taint).

Combat in Tannhäuser is a dicey affair, and when I say it's dicey, that's because you're going to roll a whole lot of dice. The attacker (probably one of those damned Nazis) fires his gun at a noble and brave Union trooper by rolling a number of dice equal to his combat score. Every die that's at least as high as the trooper's stamina score is a hit. Then the trooper rolls his shock roll to try to blow off the damage - he rolls as many dice as his stamina, and has to beat the Nazi's combat score. Every success cancels one hit.

This combat mechanic is fun, and highly cinematic, but it is wildly unpredictable. Attacks could generate five wounds, and then have every one of them canceled. Then the next attack will generate three wounds, and the defender won't block a single one. The defender will often be rolling more dice that the attacker and have a lower target number, meaning that the odds of defending are actually higher than the odds of successfully attacking. That, in my opinion, is an oversight in game design, and removes a great deal of strategy from the game by reducing much of the battle to luck. It's still fun, but it's not really a contest of wits as much as a fun way to shoot Nazis.

To improve your odds of actually killing a Nazi bastard, every character in the game has a bunch of different special tokens. These tokens give the character anything from super-powerful machine guns to evil mind-bending powers. There's even one token that gives the demon-touched troopers their demon taint (yeah, I had to work it in again). You can customize your characters by swapping out their tokens, so you could give the dynamite nut a knife instead of a first aid kit.

Tannhäuser comes with four different game types. You've got the most basic deathmatch mode, where you equip your soldiers and just do your best to shoot holes in the other team. The story mode has you maneuvering around the board, trying to fulfill objectives like stealing plans and sending secret telegrams. The capture-the-flag mode and the domination mode are very similar, and both place more importance on positioning and maneuvering than flat-out shooting.

There are tons of pieces in a box of Tannhäuser. There are ten figures, which I mentioned before, and while the paint jobs could be better, they're still really awesome figures. There are ten character cards to go with the figures, plus more than a half dozen cardboard circles for every character. There are a dozen or so crates, a few dozen objectives, eight flags, and ten victory point counters. The upside is that FFG knows there are a lot of pieces to keep straight, so they include a bunch of little plastic bags to hold all those different parts. Of course, I still ended up using a dozen sandwich bags on top of the ones in the box.

I end up saying this about a lot of games - Tannhäuser is not for everyone. It is not a game that you play to see who has more skill at tactical maneuvering. You don't get to gloat after a game of Tannhäuser, because there is a very good chance that your dice did all the work. If you want a game where the skilled player beats the rookie most of the time, go play Othello. Tannhäuser is not that game.

On the other hand, if you want to tell a story, Tannhäuser might be just the thing. If you like playing games like HeroQuest and Last Night on Earth, this might be just the thing for you. The final resolution of the game is less important than the game that gets you there. You can almost hear the machine-gun chatter and screams in frantic German, the commando leader shouting, 'Go! Go! Go!' as he vaults over a pile of rubble and unloads his experimental machine gun at the mutant bodyguard covered in pulsing, glowing, unholy tattoos. When I play a game where I can almost smell the gunpowder and feel the sickly chill of the opening portal to Hell, I don't care if I win. I just want to play again, because I want to use the freaky metal skull to light another hero of the Union on fire from the inside, then cackle madly as I run away into a cloud of smoke.

I have heard from a lot of people who really don't like Tannhäuser. I don't want to make you want this game if you don't know what you're getting. I love Tannhäuser, and can't wait to play it again, but I caution anyone thinking of buying this game to keep in mind that there's not much contest here. You play so you can live out a thrilling battle in a crazy alternate past, look at the killer miniatures and fantastic art, and scream, 'Die, Nazi bastard!'

And look out for the guy with the demon taint. No standard bottle of topical cream is going to take care of that problem.

Cons:
A whole lot of luck
Not really a contest

Tannhäuser is a blast if you like story games. If you want a copy, go get it here:
http://www.fantasyflightgames.com/tannhauser_tannhauser.html
Posted by Matt Drake at 8:30 PM

"I have a gorgeous taint."
- Chick McGee

All I can say is that Taint Funny!

So now i don't feel so cool about winning my first 2 games against someone who had played it a few times.
I actually think their can be some strategy in it, or maybe that is just me thinking I am good at strategy when it was just luck of the dice.

I found it was a lot to keep track of the first few games - so many tokens to keep in mind.

Some of the guns can only be shot from so far away - oops forgot about that one.

I love games that tell a story, but a story telling game should still include meaningful choices. In my experience with Tannhauser the choices are all menial and have no real effect on the game.

I have not wanted to play a game this much since Heroscape came out. I am in on all the expansions, too. I must locate players...

While I was reading your review I was thinking of oldskool HeroQuest, then you mentioned it. As a kid me and my friends had so much fun with that game. We even made up a custom set of rules.

I actually bought the game based on this review, and I'm glad I did. It's a blast.

Gameplay is really imbued by the theme. The whole thing feels like the final scene from some wacky sci-fi/action flick. The characters are distinct. The action is fun. The art is beautiful.

Yes, there's a lot of luck, but it can be compounded by bad decisions, in which case you'll see your team get shredded quick-fast. In either case, we plan on getting the expansions...