Fantastic Board Game Review - Rex: Final Days of an Empire 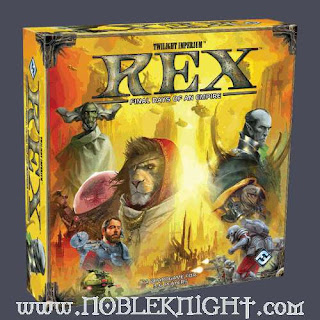 I sometimes question my gamer credibility. I read stuff written by all these really impressive nerds who have tons of references and who have all played all these old-school games that I ignored when they were out, because I was playing HeroQuest and lots of NES. For instance, I've never played Magic Quest, and that's supposed to be a really big deal. I haven't even seen a copy of Titan in my whole life, and those big-shot nerds are always talking about what an impressive game it was. And the most relevant to tonight's discussion is that I never played the old Dune game, and what is worse, I don't even like the books.

The reason that's relevant is that I'm reviewing Rex: Final Days of an Empire, and it's a reprint of Dune. Which I've never played. So if you're reading this review and hoping I will answer that burning question that goes, 'why does it burn when I pee?', then I will tell you to take a break from loose women. And if you ask me how Rex compares to the original, then I will tell you that you're an idiot, because I just told you I never played Dune.

However, if you ask me if Rex is an awesome game, I would be inclined to say yes, it is an awesome game. Because it is. At first, it looks like a fairly simple battle game, where you try to grab up specific power points to try to control the city. But as you play, you realize that there are layers to Rex, and as you peel back one, you discover yet another way that the game will blow your mind. Peel them back enough, and you can get to the gooey center, which, it turns out, is just saltwater taffy.

The most obvious secondary level to the game is the negotiation. Every turn, a card tells you where influence will be placed, and you'll all rush around to grab it up. But sometimes, before that card pops out, a different card will tell you that there's a ceasefire, and you can talk alliances. When that happens, it can be a total free-for-all, with everyone jockeying for position, trading influence for favorable alliances, and possibly stabbing allies in the back to win the game alone. When alliances occur, they change the landscape of the game, and make previously weak targets into powerful friends - or enemies. Or ex-wives.

Then you've got your various factions. One player might be the humans, holding onto their last vestiges of power and trying to stave off the fall of their empire. They get free troops by the bucket, but they're almost always broke. If they team up with the merchants, though, they can offer protection from the random acts of violence that sporadically occur around the city, and in exchange, the merchants can toss them a few bucks now and then, to keep them competitive. Mind-readers and psychics face off against peace-loving turtle people who can see the future, and nobody wants to come up against the political assholes, because they might just turn your leaders against you and send your entire army into the crapper.

Another fantastic element of Rex is the dreadnought fleet that circles the city and routinely bombs the piss out of residential neighborhoods. These mean motor scooters simply cannot be beaten - but they can be anticipated. They move on a specific path, and while only the humans know how far they will go, it's always safe in whatever place they just left. Although there's probably a mess.

It's impossible to relate every brilliant aspect of Rex. It works on so many levels that if you approach it as one kind of game and ignore the others, you won't stand a chance. If you don't plan for future traitorous possibilities, they're virtually certain to rear up and bite you. If you focus all your energy on getting powerful cards, you won't have anything left to buy troops. And if you spend all your time looking at internet porn, you won't get any work done (though that's just basically how life works, and has very little to do with Rex).

One potential downside of having all these layers is that you really need a full crew to see them all. With four people, the negotiation is limited, and with only three, it's pretty much out of the picture completely. Plus the game is more interesting when you have to take into account the various capabilities of your opponents, and with fewer opponents, there are fewer considerations. If the political backstabbers aren't there, you can feel comfortable using more leaders, and if the turtle-people are gone, you don't have to worry that they're going to keep you from playing the cards that would kick their shell-covered butts. This is one game that really begs for the most people you can gather, and if you only ever play with the same person, I wouldn't bother with Rex at all.

Like most of my favorite games, Rex is not one that you can set up and knock out in thirty minutes. It's several hours of investment, but the time will fly by so fast that you'll wonder why your stomach is rumbling, until you look at a clock and realize you haven't eaten in six hours. It's not a marathon, or anything, but don't think you're going to just play real fast and then break out something else. When you decide to play Rex, you have to be ready to sit down and have a few hours of fun, and not try to rush through so you can get to the next game before the store manager closes down the food court where your weekly game club meets to play Euros in public.

So maybe I haven't played all these amazing old games that big-shot nerds are always bragging about. Maybe I was playing old-school D&D and bookshelf war-games with my old man when all those super-cool geeks were enjoying all-night Twilight Imperium marathons. But I am hoping that by reviewing Rex: Final Days of an Empire, I have restored just a couple points of gamer cred. I need those cred points. I was just about to trade them in for a pony.

Pros:
Deep and engaging
Requires strategy, tactics and negotiation skills
Your faction will influence your play style without forcing you into a role
You'll be talking about the game three days alter

Cons:
Much, much better with more people - three people loses a lot

I heartily recommend Rex, if you've got four or five people you can get together to take it for a spin. Run over to Noble Knight Games, and tell 'em I sent you:
GET MEDIEVAL ON THE EMPIRE
Posted by Matt Drake at 3:03 PM

awesome board game! always play with 6 players, so you get to see all the unique racial abilities. you have to be ruthless and strategic to win a game.