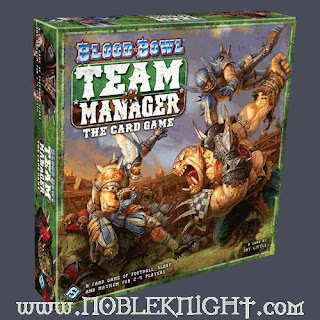 So far, 2012 has been the year I had to keep making exceptions about not liking sports games. I still don't want to play a game about soccer or baseball or cricket or professional curling, but I'm considering changing my opinion about sports games in general. There are just too many oddball sports games out there that I wind up liking. Hell, a while back, I even liked one about hockey (though in my defense, that was just barely about hockey).

The latest game to challenge my dislike of board-game sports is Blood Bowl Team Manager. I was not expecting to enjoy this one. I never did like the original Blood Bowl, because it was basically a clusterhump football game with tomes of rules and obscene violence. Combine my distaste for sports games with my general lack of interest in Blood Bowl, and the odds of me liking Blood Bowl Team Manager were about the same as becoming an astronaut.

Blood Bowl Team Manager is, I suppose, essentially a sports game, but rather than fighting your way through a single game, you're competing in an entire season. You're not the coach, either. You're the manager of the whole team. Every game turn is an entire week of a five-week season, so you'll be handling your team as they head out to various matches and tournaments. You'll recruit hard-hitting dwarf linebackers, swift elf quarterbacks, and brutal orcish knee-breakers. Your team will learn new tricks, obtain sponsors, and otherwise get better at the sport of Blood Bowl, and in the end, the team with the most fans wins the game.

At first, there's an intimidating amount of stuff happening. You draw your cards (the guys who will be your team for this go-round), find out which matches are available, and plan your approach to the week ahead. This part seems pretty basic, but what happens here makes a big difference in what happens next. It might be that there's a tournament, and the winner is going to get a whole mess of bloodthirsty fans. Or maybe there are only the regular matches, but a random rainstorm means you can't over-commit. Your strategy for the coming round will depend heavily on this part, so it's crucial to pay attention. It might also be a good idea to hire the Saints to set you up a bounty system.

Then you get into the meat of the game, where you decide where to put your players to get you the rewards you want to build your team and earn some fans. Do you pit your passer against the skaven receiver, or put in your tough blocker to try to send the opposing passer to the penalty box (which I'm pretty sure is actually hockey)? Will you compete for the big payoff of fans, or hold off to try to pick up another star player? Will you get caught in a hotel room with an eight-ball and a couple hookers or go on Dancing With The Stars? The choice is yours. Except for that last one. You can't to go on Dancing With The Stars until your career nosedives.

The balance of aggression, careful card play, and long-term planning makes Team Manager an exceptionally interesting game. It's not just important to play the right card in the right place, you also have to choose the right time to play it. You'll build a strategy that takes into account the team you're playing, the cards you've acquired on previous turns, the opponents you face, the time left in the game, and lots of other factors that make it hard to decide what you want to do. Which, if you ask me, makes it more awesome.

The game also looks great. The cards all have art that will help you envision all the madness of managing the roster and yelling at players who don't show up for practice and trying to get the chaos warriors to quit oozing corrupting goo all over the guy who picks up the towels.

I do have a couple problems with the game, though these are largely my personal preference. My biggest problem is the same one I always had with the original. In a world where peasants squabble for food in the mud, where the highest technology available is a portable toilet, and where chaos demons make a regular habit of eating small villages, who the hell has time to watch professional sporting events? And I don't mean gladatorial fights where the rules are 'if you walk out, you win,' I mean there are sportscasters and locker rooms and cheerleaders. The anachronism is staggering, and I've always kind of just rolled my eyes at the sheer silliness of it. You guys don't have time to make professional sporting teams! There are man-sized rat-people planting diseased stinkbugs in your sewers!

But I know many people can get past the mental block that I've always had with Blood Bowl and still really love it. The original game was wildly popular for a long time, even after it was out of print, so I am sure plenty of nerds are completely willing to accept an established sports league in a time before anyone invented toilet paper. However, the other problems I had relate quite a bit better to the game itself.

For one thing, it can be a little complicated. It's no where near as complex as the original, and you don't have to paint up any miniatures or analyze rules for interceptions or penalty flags. But it can still be confusing to follow the abstractions that move the ball from midfield to your hands, or to understand how you divvy up rewards at the end of a week. It's not insurmountable, and I have fallen madly in love with games that are a lot trickier. I'm just saying that it's not hard to play your first game wrong.

But it's also kind of long. Again, this is a personal preference thing, and in this particular case I don't mind at all. If you're trying to decide if you want to play Team Manager, however, you need to understand that it can take a couple hours to finish a four-player game. Maybe longer, if it's your first time. Once you get it down, you can probably blow through those five turns in less than an hour, but until you're good at it, Team Manager is going to take a while. Like I said, that's fine with me, and I don't personally count that as a strike against the game. It might be a consideration for you, is the only reason I bring it up.

My final complaint is one that Fantasy Flight has practically trademarked - the FAQ. For no reason I adequately understand, nearly every FFG game ships with ridiculous mistakes. Fantasy Flight does not ask forgiveness for these errors, they simply post an online errata guide that tells you which cards are not supposed to be in the game any more, even though you paid for them, which rules were printed incorrectly, and other total boners that should have been caught and that you will never know about if you don't go online to find out what FFG screwed up this time. If you ask me, it's a little embarrassing that one of the largest game companies in the world has to issue updates every third time they put something on the market.

These complaints are minor, and for me, a non-issue (except the idea of playing football while trolls throw poop at the city gates). Blood Bowl Team Manager is a really cool game. There's plenty of tough decisions, lots of strategy combining with plenty of tactical plays, and a fun theme (even if it doesn't make any sense). When your dwarf rolls out on his giant rolling lawnmower and sends the entire opposing team to the emergency room, or when your nasty man-eating orc gains fans for eating the other players, you can almost hear Madden saying, 'we got a game where usually the team that scores the most points wins the game' and then eating a five-legged turkey.

Cons:
Can take a while
A wee bit complicated
Theme is just silly (feel free to curse me for thinking Blood Bowl is ridiculous)
FFG is becoming synonymous with FAQ

I sure did like Blood Bowl Team Manager, silly theme notwithstanding. If it sounds like you might like it, run over to Noble Knight Games and pick it up. Tell 'em I sent you.
HUT HUT OH MY SPLEEN
Posted by Matt Drake at 8:31 PM

I've been on the fence with this one, not looking too seriously at it since we also have a regular Blood Bowl league going on right now.

Now I'm a little more intrigued about this one after all, curses to you.

As for the ridiculous setting, I never paid much attention to it, but you're absolutely right, it is a bit silly especially the CABALvision concept where games are streamed live into homes via crystal balls and a guild of wizards.

This game is righteous awesome. Play only 4 rounds though, with 1 tournament.

I've played dozens of games of this. Fun throughout, and I have never hoped for an expansion like I do with this game. Side note - my 8-year-old son kicks the shit out of me in this game. He just gets it, and makes me pay.

Bloodbowl doesn't take place in the same universe as the Warhammer Fantasy Universe.
It is a mirror universe where the same races exist but there aren't weekly daemonic invasions.