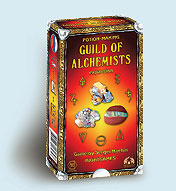 Time now for another review of Russian gaming awesomeness (I would like to point out that my word processor believes that 'awesomeness' is actually a word, and so I intend to use it a lot more from now on). Tonight's review will address the final expansion for Potion-Making Practice, called Guild of Alchemists, which provides yet another way to play one of my favorite Russian games.

Guild of Alchemists asks players to create the ultimate alchemical product - the philosopher's stone. Harry Potter may have had to work a lot harder for this one, but you can do it at your kitchen table while you drink a beer and talk about girls. Of course, if you are playing it with girls, you may want to talk about something else. That part is up to you.

In Guild of Alchemists, each player will get a card that will tell him all the concoctions he has to make to get to the final big payoff. So you'll have to make the Love Potion, then the Molecular Doohickey, then the Unicorn Fart, and so on. Each progressively more complex creation will get you more points, so even if you don't actually manage to make all these items, you've still got a shot at winning, because making the philosopher's stone is worth a bunch of points, but it's no guarantee that you'll win.

If you've played Potion-Making Practice very often, you'll probably spot one particularly damning aspect right off the bat - it can be VERY HARD to make specific potions in a specific order. Usually you just sort of scheme your way to a big combo, but you only manage to get one or two really impressive creations. Now, though, you're going to have to find them, find the parts you need, and only then move on to the next one. This can be frustrating, especially to the new player, so if you're new to Potion-Making Practice, I really would not play Guild of Alchemists until you've got a good handle on the game. I played the original at least a dozen times before I ever tried this crazy difficult expansion.

However, it's not all bad news. There are a bunch of new spells in Guild of Alchemists that can help you get what you need. There's nothing like the painful groan you get when your opponent puts the potion you need in the table of elements, and you can't get it because now it's just a ball of Firelight (that's a stupid exaggeration - there are plenty of things just like that painful groan, most of which are other painful groans). But thanks to the spells that let you just pick up a card and put it in your hand, the path to your magnum opus is quite a bit easier than it seems to be on the surface.

And if you really want to release the hogs of war (or dogs of war, whatever farm animal of war, Lana), you can add in University Course, which is chock full of spells that pretty much mean all bets are off. In fact, this is now the only way we play the game. With the base game and both expansions in play, potions will be made left and right, monsters will be summoned, talismans will be crafted, and scores will reach triple digits. This is not Sparta. This is just madness.

But it's fun madness. It takes about two hours to play now, at a minimum, but it's a wild two hours. Even if you wind up twenty points down, you're not out of this one as long as the cards you need are still in the game. And in two hours, most of the cards will show up sooner or later, so eventually, someone will probably make their final concoction, and usually, that big payoff will be enough to eke out a win, even from last place. You still have to manage your hand. You still have to think about every play. But with more to do, and more to do it with, you won't feel as tightly constrained as the original game tends to be, and you won't have anywhere near as many frustrating turns where you can't do a damned thing.

Potion-Making Practice has become a staple of weekend gaming in my house. We'll set aside a whole evening to whip up wild elixirs and devious schemes. In fact, I'm considering making some card trays out of wood that will let us organize all the various elements and hold the three decks, just to make it seem more official (I could probably just draw a chart on poster board, but this would be an excuse to do some woodworking). If you're a serious fan of Potion-Making Practice, definitely consider snagging a copy of Guild of Alchemists, and get University Course while you're at it. If you're just dabbling, or if the original only hits your table once a year, I would save your money.

Pros:
Adds a sense of direction to the chaos
Makes a simple card game into an evening of entertainment
Adds more options, more decisions and more action

Cons:
Will double or triple the amount of time you need to finish a game
Can be very frustrating if you don't know what you're doing

Do you have any idea how cool it is that you can order Russian games from anywhere in the world? I'll tell you. It's pretty cool. Here's a link:
WHIP UP SOME STONES
Posted by Matt Drake at 10:45 PM