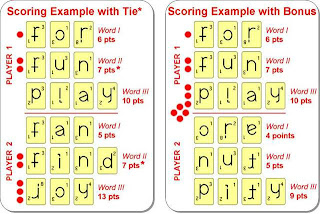 I get asked, on a fairly regular basis, to review prototypes of games that are on Kickstarter. I pass on most, because I am not going to review a game that's basically a bunch of Post-It notes stuck onto a sheet of cardstock, but now and then I go against my better judgment and try a game that I had no business agreeing to play. That's how I got suckered into reviewing Word Wars I.II.III, and that is why I will very soon be getting some extremely disagreeable correspondence from a guy whose name may or may not be Alvin. I will explain my confusion shortly.

Word Wars (I'm dropping the numbers, as not only do they not really help the title any, they are a pain in the ass to type) is a scrabble-like game played with cards. You get ten cards with letters on them, and you try to make three words. The trick is that each card can be played as one of two letters - if you've got a 'p,' you can flip it upside down and make it a 'd.' That one is pretty easy to figure out, but the 'x' that turns into a 'z' needs a decoder ring, and the 'g' that could also be a 'k' is almost indecipherable.

The idea here is that having the option of flipping your letters offers a greater variety of options in spelling words. This is why it's even possible to create three words with ten letters. The problem we found, however, is that while it is an interesting idea, it fails in execution thanks to a strange distribution of letters.

Let me back up and interrupt myself.

The company that makes Word Wars is actually one guy. A long time ago, he tried to sell the game to Wizards of the Coast, but they didn't want it and sent the standard 'we don't buy unsolicited games' boilerplate, except that Richard Garfield said, 'cool idea,' which the creator is using as an endorsement. Then just recently, he tried to partner up with Zynga, and they didn't want it, and sent him the same form letter. And so, rather than say, 'huh, I guess nobody really wants this game,' he started telling people that he was fighting the good fight against powerful corporations and put his game up on Kickstarter. Why none of this triggered any red flags for me, I can't say, because I knew most of this before I agreed to play the game.

At some point in time, Word Wars was actually a tile game. This is why I had to back up - to explain why the letter distribution was odd. It was basically just Scrabble, but you could flip the letters to make different words. In that case, the letter distribution basically worked, and although 'a' and 'e' were on the same tile, you could work with that. But then after the lengthy history of being beaten down by those mean publishers who would destroy a man's dreams, the guy (Alvin, I think, though I'm not sure) remade it as a card game.

And honestly, the card game isn't bad, but - and here's the biggest problem - it does not need flippy letters. You could put 'z' and 'x' on the same card, and just put one letter on one side of the card, and the other letter on the other side. In other words, when this stopped being a tile-laying Scrabble clone, it didn't need the gimmick any more.

The shame is that the gimmick actually would have worked, if he had sold these as alternate Scrabble tiles. It could have made Scrabble more fun, which is not saying much because it's still Scrabble. But they're not alternate Scrabble tiles, they're cards, and if you don't get dealt enough cards with vowels on them, you can't spell a damned thing. And since the 'a' and 'e' are on the same card, this can happen with alarming frequency.

Word Wars is not a bad game. In fact, after I put it away, one member of my usual gaming group asked if she could buy it from me, because she had a good time. Seriously, it's not bad. But it's amateur hour at its worst, and shows what happens when you get too attached to an idea and can't let it go, even if it would improve the game. Get rid of the confusing inverted letters, redistribute the letters, and you would have an interesting little game that you could take camping and play with smart people. As it is, Word Wars is an almost-ran, a workable game that could have been a lot better, if the creator were not dead set on showing people how clever he is.

So now that I said some unkind things about Word Wars, I expect Alvin (if that is his name) will be complaining to me. That, or he will use the comments section to write a review of my review that will be as long as the original (if not longer). And I will still not be sure of his name, because while he signed the letter he sent with the game, he uses a rather strange script made out of letters that I think came out of his game. It looks like Alvin, but I can't say with any surety. I also can't tell what many of the letters in Word Wars are supposed to be, which might be why all those monoliths of corporate game design didn't want to buy his game.

If you want an interesting card game with words, you could do worse than Word Wars. It's got a lot of problems, but if you're patient, there's a decent game in there. This Kickstarter project is going for another week or two, so you might be able to pick up a copy cheap. Once it's gone, I wouldn't count on seeing it again.

Pros:
Interesting word puzzler
Will help you stretch your language muscles (with four-letter-words)

Cons:
Unfortunate letter distribution can make this harder to play
A neat gimmick that would work great - in a different game

You can pick up this little game for twelve bucks. That's not too bad, and it might even be worth your money. But you've only got until the middle of the month, so hurry up and check it out:
FLIP YOUR WORDS
Posted by Matt Drake at 3:02 PM